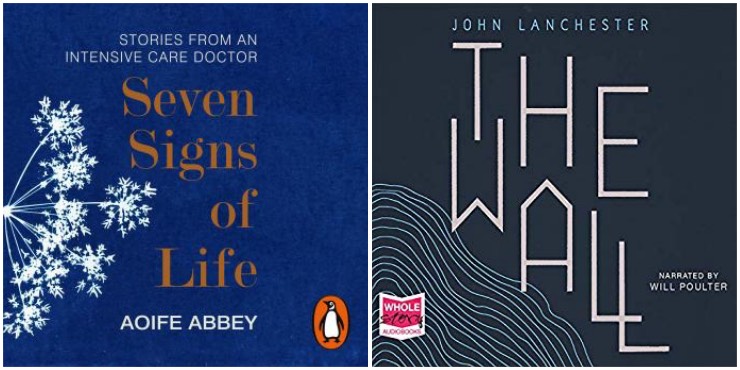 “For a doctor in Intensive Care, intense emotion is part of the job. Fear in the eyes of a terminally ill patient who pleads with you to not let them die. Disgust at caring for a convicted rapist. But there are also moments of joy, like the rare bright spots of lucidity for a dementia patient, or when the ward unexpectedly breaks into song.

“Dr Aoife Abbey shows us what a doctor sees of humanity as it comes through the door of the hospital and takes us beyond a purely medical perspective. Told through seven emotions, Seven Signs of Life is about what it means to be alive and to care for a living.”

Chasing the Dime, by Michael Connelly, read by Jonathan Davis

“The messages waiting for Henry Pierce when he plugs in his new telephone clearly aren’t intended for him: ‘Where is Lilly? This is her number. It’s on the site.’

“Pierce has just been thrown out by his girlfriend and moved into a new apartment, and the company he founded is headed into the most critical phase of fund-raising. He’s been ‘chasing the dime’ - doing all it takes to come out first in a technological battle whose victor will make millions. But he can’t get the messages for a woman named Lilly out of his head:

“‘Uh, yes, hello, my name is Frank. I’m at the Peninsula. Room six-twelve. So give me a call when you can.’

“Something is wrong. Pierce probes, investigates, and then tumbles through a hole, leaving behind a life driven by work to track down and help a woman he has never met.”

“Vespasian has been made Governor of Africa. Nero, Rome’s increasingly unpredictable Emperor, orders him to journey with his most trusted men to a far-flung empire in Africa to free 200 Roman citizens who have been enslaved by a desert kingdom. Vespasian arrives at the city to negotiate their emancipation, hoping to return to Rome a hero and find himself back in favour with Nero.

“But when Vespasian reaches the city, he discovers a slave population on the edge of revolt. With no army to keep the population in check, it isn’t long before tensions spill over into bloody chaos.”

The Scandal, by Mari Hannah, read by Colleen Prendergast

“When a man is found stabbed to death in a side street in Newcastle city centre, it looks like a botched robbery to DCI David Stone. But when DS Frankie Oliver arrives at the crime scene, she gets more than she bargained for. She IDs the victim as Herald court reporter, Chris Adams, who she’s known since they were kids.

“With no eyewitnesses, the MIT are stumped. They discover that when Adams went out, never to return, he was working on a scoop that would make his name. But what was the story he was investigating? As the detectives battle to solve the case, they uncover a link to a missing woman that turns the investigation on its head.”

“Alicia Berenson writes a diary as a release, an outlet - and to prove to her beloved husband that everything is fine. She can’t bear the thought of worrying Gabriel, or causing him pain. Until, late one evening, Alicia shoots Gabriel five times and then never speaks another word.

“Forensic psychotherapist Theo Faber is convinced he can successfully treat Alicia, where all others have failed. Obsessed with investigating her crime, his discoveries suggest Alicia’s silence goes far deeper than he first thought. And if she speaks, would he want to hear the truth?”

“Aydin Torkal - aka Sleeper 13 - is on the run. Hunted not only by the world’s intelligence agencies, but also by the elite brotherhood of insurgents he betrayed, he has lived the past year like a ghost. Until now.

“MI6 agent Rachel Cox knows Aydin better than anyone. The only person who believes he is an ally in the ongoing war on terror, not the enemy. So when a coded message arrives from him, warning her not to trust her own colleagues,

“Rachel must choose between her career and the truth. But as Aydin hunts down those who destroyed his childhood, the trail he follows will lead him closer to home than he ever expected. He won’t stop until he has his revenge.”

“Tommy Hopkins’ early years aren’t very promising. Born at the end of the 19th century in a slum district of Manchester, he’s blessed with a loving mam and dad, but they don’t have two ha’pennies to rub together. But Tommy is a survivor. At school he quickly makes lots of friends, and together they plot money-making schemes and play football.

“Then, it’s time to leave the playground behind. Denied the chance of a career, Tommy instead finds employment at Manchester’s Smithfield market and works his way up, finally becoming a porter. He’s becoming a man, and amongst the young women who catch his eye is Kate Lally, who may just be the love of his life…”

Heads or Tails, by Damien Boyd, read by Napoleon Ryan

“A man has been mutilated and left to drown on the incoming tide, handcuffed in his van. With the murder bearing a striking resemblance to a string of sadistic killings carried out with surgical precision in 1990s gangland Manchester, it can mean only one thing: the killer is back.

“Transferred to the Major Investigation Team, DI Nick Dixon is assigned a new partner and sent to Manchester. Meanwhile, the gruesome murders in Somerset continue.

“Convinced of a connection with the unsolved gangland killings, and with the odds stacked against him, Dixon takes the ultimate gamble, determined to bring the killer to justice before it’s too late.

“But is it the same killer? If so, why has he resurfaced now? And how many more must die?”

Run and Hide, by Alan McDermott, read by Angela Dawe

“Eva Driscoll is used to chasing down bad guys, but now the bad guys are chasing her. She knows they won’t stop until she’s dead.

“After her brother is killed in a faked suicide, Driscoll teams up with ex-soldier Rees Colback, the one person who can help her find answers. Together they’re determined to uncover why members of his Special Forces squad are dying in mysterious circumstances.

“But with every agency in the country in hot pursuit, their only choice is to flee. The clock is ticking. They can’t run forever. It’s time to make a choice: kill or be killed.”

The Wall, by John Lanchester, read by Will Poulter