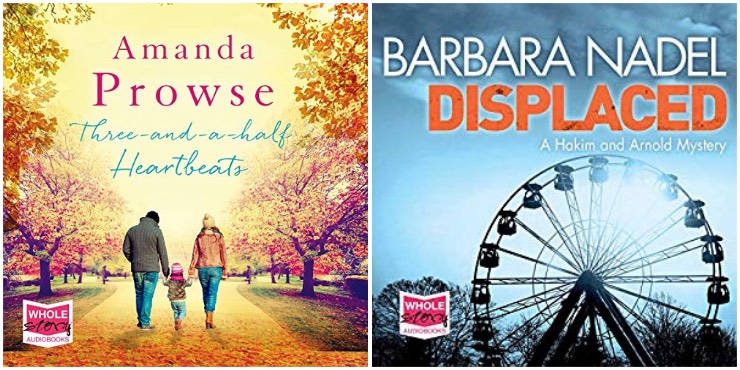 The French Girl, by Lexie Elliott, read by Helen Longworth

“We all have our secrets.

“They were six university students from Oxford - friends and sometimes more than friends - spending an idyllic week together in a French farmhouse. It was supposed to be the perfect summer getaway - until they met Severine, the girl next door.

“For Kate Channing, Severine was an unwelcome presence, her inscrutable beauty undermining the close-knit group’s loyalties amid the already simmering tensions. And after a huge altercation on the last night of the holiday, Kate knew nothing would ever be the same. There are some things you can’t forgive. And there are some people you can’t forget - like Severine, who was never seen again.

“Now, a decade later, the case is reopened when Severine’s body is found in the well behind the farmhouse.”

Don’t You Forget About Me, by Alexandra Potter, read by Victoria Fox

“Tess is heartbroken when Seb breaks up with her and can’t help blaming herself. If only she’d done things differently. Drunk and upset on New Year’s Eve she wishes she’d never met him.

“When she wakes up to discover this dream has come true, she realises she has a chance. To do it all over again. And, this time, to get it right.”

“Anna is determined to understand why her brother apparently murdered first their father, then their mother, while they slept at their small farm in Maryland. The trail will lead her to events set in motion during one night nearly four decades ago in a Berlin safe house run by the CIA.”

“Viv Albertine is one of a handful of original punks who changed music, and the discourse around it, forever. Here, before and beyond the break-up of The Slits in 1982, is the full story of a life lived unscripted, with foolishness, bravery and great emotional honesty.”

“A killer is on the loose, attacking people in places they feel most safe: their workplaces, their homes. It’s up to DS Grace Allendale to stop the murders, and prove herself to her new team.

“All clues lead to local crime family the Steeles, but that’s where things get complicated. Because the Steeles aren’t just any family, they’re Grace’s family. Two brothers and two sisters, connected by the violent father only Grace and her mother escaped. To catch the killer, Grace will have to choose between her team and her blood. But who do you trust when both sides are out to get you?”

“Bree Dwyer is desperate to escape her husband, take the children and run. But he’s always watching. And she always gets caught. Until her first love, Alfie Jennings, returns to Essex.

“Gangsters Alfie and Vaughn have been out of the game for a while, but a life of crime is one you never forget. To get back on top they need serious money, because loyalty and power don’t come for free. One dangerous job and they’ll have the payoff they need. And Alfie isn’t going to let anyone get in the way, least of all a pretty face like Bree. It’s time to show Essex what they’re made of. And this time, Alfie and Vaughn aren’t backing down.”

“Irving Levy is a man with few roots and, now that he is terminally ill, is anxious to find anyone to whom he can leave his considerable property. When he learns that there may be more to the disappearance of his younger sister, who disappeared when she was a baby, he engages the services of Hakim and Arnold to investigate.

“Unwittingly in mortal danger, the private detectives and Levy enter the world of Barking Park Fair and the secrets its brightly coloured attractions conceal. Secrets that lead them not just back to a crime committed in 1963, but to the chaotic world of post-war Europe where few people were what they seemed.”

“Grace and Tom Penderford have a strong marriage, a comfortable home in the Hertfordshire countryside, and a healthy baby girl. They are happy - normal. But soon after Chloe turns three, tragedy strikes. A disease called Sepsis claims the life of their daughter, devastating their little family. They had never heard of Sepsis - a cruel, indiscriminate disease that claims a life somewhere in the world every three and a half seconds. Now, with their world crumbling, they must mend each other’s broken heart - and try to save their marriage, if they can.”

The Insomnia Museum, by Laurie Canciani, read by Imogen Wilde

“Anna lives in a flat with dad. He is a hoarder, and together they have spent the last 12 years constructing the Insomnia Museum, a labyrinth built from dead TVs, old cuckoo clocks, stacks of newspapers and other junk Dad has found.

“Anna is 17. She can’t remember ever having seen outside the flat, but noises penetrate her isolated world: dogs bark in the walls; music plays in the floor, and a ship sails through the canyons between the tower blocks.

“Then one day dad falls asleep and won’t wake up, and Anna must leave the museum and try to survive in a place that turns out to be stranger and more dangerous than she could have imagined.”

Petals and Stones, by Joanne Burn, read by Georgia Maguire

“When Uma discovers her husband’s infidelity just hours before his untimely death, the carefully woven threads of her life begin to unravel. Struggling to manage the grief of those around her, she escapes to a remote cottage by the coast where she swims in the winter sea, cooks the forgotten Keralan dishes of her childhood and begins the search for her husband’s lover.

“It isn’t long before Uma realises what she must do to pick up the tattered threads of her life. But will her choices jeopardise the only family she has left?”