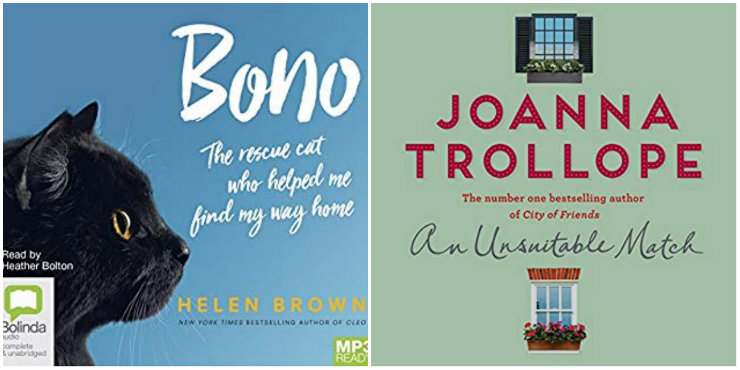 “It all begins with a hot air balloon trip and three bottles of champagne. Allan and Julius are ready for some spectacular views, but they’re not expecting to land in the sea and be rescued by a North Korean ship, and they could never have imagined that the captain of the ship would be harboring a suitcase full of contraband uranium, on a nuclear weapons mission for Kim Jong-un. Yikes!

“Soon Allan and Julius are at the centre of a complex diplomatic crisis involving world figures from the Swedish foreign minister to Angela Merkel and President Trump. Needless to say, things are about to get very, very complicated.”

The Meg: a novel of deep terror, by Steve Altern, read by Sean Runnette

“Traumatised by the experience of having been face to face with Charcharodon Megalodon, the giant prehistoric shark, Jonas has been dismissed by some as mentally unstable. But when the shark finds a way out of the water, nothing is safe!”

“It was a cloudless summer day in the year 1900. Everyone at Appleyard College for Young Ladies agreed it was just right for a picnic at Hanging Rock. After lunch, a group of three of the girls climbed into the blaze of the afternoon sun, pressing on through the scrub into the shadows of Hanging Rock. Further, higher, till at last they disappeared. They never returned.

“Whether Picnic at Hanging Rock is fact or fiction the reader must decide for themselves.”

The Burning Chambers, by Kate Mosse, read by Hattie Morahan

“Carcassonne, 1562: 19-year-old Minou Joubert receives an anonymous letter at her father’s bookshop. Sealed with a distinctive family crest, it contains just five words: “She Knows That You Live”. But before Minou can decipher the mysterious message, a chance encounter with a young Huguenot convert, Piet Reydon, changes her destiny forever. For Piet has a dangerous mission of his own, and he will need Minou’s help if he is to get out of La Cité alive.

“Toulouse: As the religious divide deepens in the Midi, and old friends become enemies, Minou and Piet both find themselves trapped in Toulouse, facing new dangers as sectarian tensions ignite across the city, the battle lines are drawn in blood and the conspiracy darkens further. Meanwhile, as a long-hidden document threatens to resurface, the mistress of Puivert is obsessed with uncovering its secret and strengthening her power…”

The President is Missing, by Bill Clinton & James Patterson, read by various

“The President is Missing. The world is in shock.

“But the reason he’s missing is much worse than anyone can imagine.

“With details only a President could know, and the kind of suspense only James Patterson can deliver.”

The Woman in the Wood, by Lesley Pearse, read by Rosie Jones

“15 year old Maisy Mitcham and her twin brother Duncan lose their mother to an asylum one night in 1960. The twins are sent to their grandmother’s country house, Nightingales. Cold and distant, she leaves them to their own devices, to explore and to grow. That is until the day Duncan doesn’t come home from the woods.

“With their grandmother seeming to have little interest in her grandson’s disappearance, and the police soon giving up hope, it is left to Maisy to discover the truth. And she will start with Grace Deville. A woman who lives alone in the wood, about whom rumours abound.”

“Detective Chief Inspector Alan Banks has recently moved to the Yorkshire Dales from London to escape the stress of the metropolis. But he soon finds that life in the country is not quite as idyllic as he had imagined.

“A peeping Tom is frightening the women of Eastvale. Two glue-sniffing thugs are breaking into homes. An old woman may or may not have been murdered. In addition, Banks has to deal with his attraction to a young psychologist, Jenny Fuller.

“As the tension mounts, both Jenny and Banks’ wife are drawn deeper into events. And Banks realises that his cases are weaving closer and closer together…”

An Unsuitable Match, by Joanna Trollope, read by Samantha Bond

“Rose Woodrowe is getting married to Tyler Masson - a wonderful, sensitive man who is head over heels in love with her. The only problem? This isn’t the first time for either of them, and their five grown-up children have strong opinions on the matter….

“Who to listen to? Who to please? Rose and Tyler are determined to get it right this time, but in trying to make everyone happy, can they ever be happy themselves?”

“Willa Drake can count on one hand the defining moments of her life: when she was 11 and her mother disappeared, being proposed to at 21, the accident that would make her a widow at 41. At each of these moments, Willa ended up on a path laid out for her by others. So when she receives a phone call telling her that her son’s ex-girlfriend has been shot and needs her help, she drops everything and flies across the country.

“The spur-of-the moment decision to look after this woman - and her 9-year-old daughter, and her dog - will lead Willa into uncharted territory. Surrounded by new and surprising neighbours, she is plunged into the rituals that make a community, and takes pleasure in the most unexpected things.”

Bono: the rescue cat who helped me find my way home, by Helen Brown, read by Heather Bolton

“Having survived a brush with cancer, Helen Brown, happily married and with three grown children, took stock of her comfortable suburban life and found it wanting. So when she was invited to visit New York, the city that never sleeps, she seized the day and accepted. Perhaps, she mused, she might never return. There was catch, however: would she foster a homeless cat during her stay?

“Visualising a dozy, sweet-natured snuggler called Mavis, Helen agreed. But the cat she met in the Manhattan shelter was anything but dozy. Instead, Bono, as he’d been named, was wide-eyed and unpredictable, a bundle of nervous energy with a feisty attitude and punk haircut to boot. After a shaky start, Helen and Bono began to get to know each other. And, as winter turned to spring, cat and woman explored new beginnings and past heartache, only to discover that, in the end, home is where the heart is.”