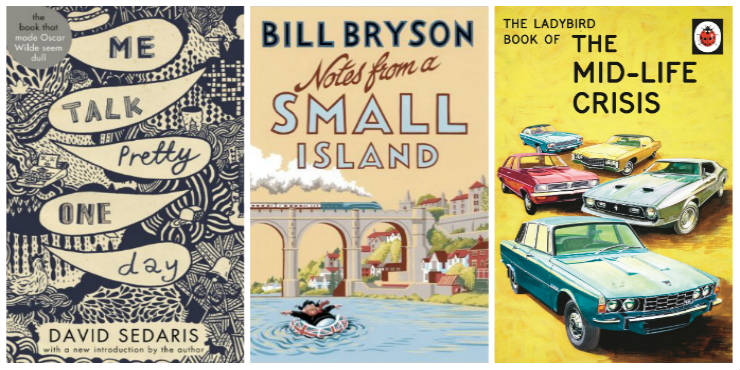 When it seems that Jeeves is losing his touch, Bertie decides to try and fix things for Aunt Dahlia himself. By a bit of matchmaking, Bertie tries to re-unite the family and solve Aunt Dahlia’s problems. But as usual everyone becomes confused.

David Sedaris moved from New York to Paris where he attempted to learn French. His teacher, a sadist, declared that every day spent with him was like giving birth the Caesarean way! These hilarious essays were inspired by that move.

In Notes from a Small Island, Bryson, who moved to England from the USA seventeen years ago and settled in North Yorkshire with his family, turns an affectionate but ironic eye on his adopted country. Some sections of this book are so funny they should not be read in public.

George and Weedon Grossmith - The Diary of a Nobody

Anxious, accident-prone and occasionally waspish, Charles Pooter has come to be seen as an epitome of English suburban life. The world he inhabits is hilariously and painfully familiar in its small-mindedness and essential decency. This book was published in the 1800s but it still retains the ability to amuse. Mr Pooter is a classic character and much of the humour derives from his complete obliviousness to the effect he has on everyone else.

Stephen Fry’s first novel involves the fabrication of a lost pornographic novel by Charles Dickens and a number of other indecent inventions. The tale begins when a public schoolboy inadvertently observes the murder of a Hungarian violinist.

In these five novels by one of Ireland’s greatest comic writers, we explore the full range of his invention, from the multi-layered madness of At Swim-Two-Birds to the piercing realism of The Hard Life and the surreal logic of The Third Policeman.

Ten years as an Assistant Lecturer at Fenland College, trying to drum English Lit into the skulls of rude mechanicals has left Henry Wilt frustrated and even murderous. So Chief Inspector Flint suspects the worst when Wilt’s wife goes missing.

This work is described as the latest in the series of Ladybird books which have been specially planned to help grown-ups with the world about them. The large clear script, the careful choice of words, the frequent repetition and the thoughtful matching of text with pictures all enable grown-ups to think they have taught themselves to cope. This is one of a series dealing with subjects like The Hangover and The Shed. The authors are comedy scriptwriters with a long string of smash hits behind them writing text in the Ladybird house style alongside original illustrations.

It is the night of the referendum and the Five have retired to Kirrin Island to enjoy the fresh air and sunshine, fed up with the rancour of public debate. George is firmly a ‘remainer,’ while Julian, who is in the ‘Brexit’ camp, is tolerated on the grounds that Anne cannot bear to go camping without him. The night is tempestuous in more ways than one. George has managed to rig up a satellite link to the mainland so they can keep abreast of the news, and they sit huddled around the fire, amidst some tension, as George’s initial hope that the ‘remainers’ will triumph proves premature. Meanwhile, a violent storm whips up. The damage is apparent as the new day dawns and George declares a new meaning for Brexit: Kirrin Island is exiting Britain, that is until the red tape becomes too much of a challenge and their happy life together is under threat.