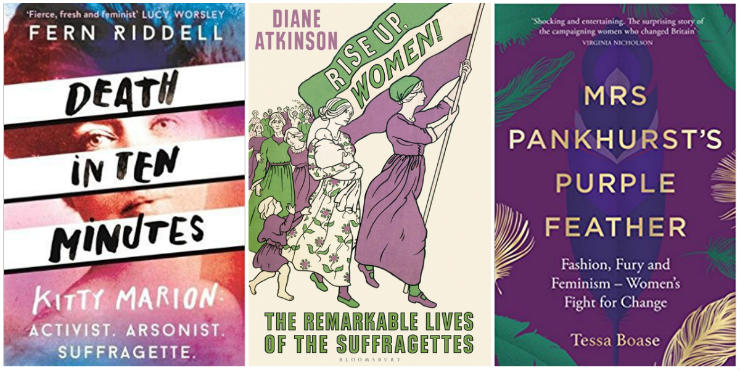 2018 marks 100 years since some women got the vote. Why not learn about some of the remarkable campaigners who won over hearts and minds in the early twentieth century?

Rise Up, Women! The remarkable lifes of the suffragettes, by Diane Atkinson

“On February 6th 1918, after campaigning for over 50 years, British women were finally granted the vote. In November 1919, the first woman MP, Lady Nancy Astor, was elected to the House of Commons. History was made.

“100 years on, it is time to reflect on the daring and painful struggle women undertook to break into a political system that excluded them. In the voices of key suffragettes, Rise Up, Women! chronicles the founding of the National Union of Women’s Suffrage Societies in the 1860s, led by Millicent Garrett Fawcett, and the formation of the more militant Women’s Social and Political Union in 1903. ‘Deeds not words!’ was their slogan - and they took increasingly violent action, enduring police brutality, imprisonment and force-feeding. Diane Atkinson depicts a truly national and international struggle.”

Hearts and Minds: the untold story of the Great Pilgrimage and how women won the vote, by Jane Robinson

“Set against the colourful background of the entire campaign for women to win the vote, Hearts and Minds tells the remarkable and inspiring story of the suffragists’ march on London.

“1913: the last long summer before the war. The country is gripped by suffragette fever. These impassioned crusaders have their admirers; some agree with their aims if not their forceful methods, while others are aghast at the thought of giving any female a vote.

“Meanwhile, hundreds of women are stepping out on to the streets of Britain. They are the suffragists: non-militant campaigners for the vote, on an astonishing six-week protest march they call the Great Pilgrimage. Rich and poor, young and old, they defy convention, risking jobs, family relationships and even their lives to persuade the country to listen to them. This is a story of ordinary people effecting extraordinary change.”

My Own Story, by Emmeline Pankhurst

“Emmeline Pankhurst grew up all too aware of the prevailing attitude of her day: that men were considered superior to women. When she was just 14 she attended her first suffrage meeting, and returned home a confirmed suffragist. Throughout the course of her career she endured humiliation, prison, hunger strikes and the repeated frustration of her aims by men in power, but she rose to become a guiding light of the suffragette movement. This is the story, in Pankhurst’s own words, of her struggle for equality.”

“This title uncovers the story of radical suffragette Kitty Marion, told through never before seen personal diaries in Kitty’s own hand.

“Kitty Marion was sent across the country by the Pankhurst family to carry out a nationwide campaign of bombings and arson attacks, as women fought for the vote using any means necessary. But in the aftermath of World War One, the dangerous and revolutionary actions of Kitty and other militant suffragettes were quickly hushed up and disowned by the previously proud movement, and the women who carried out these attacks were erased from our history. Here their untold story is brought back to life.”

Suffragettes: how Britain’s women fought & died for the right to vote, by Frank Meeres

“Together with her mother, Emmeline, Christabel Pankhurst co-led the single sex Women’s Social and Political Union (WSPU), founded in 1903 and soon regarded as the most notorious of the groupings campaigning for the parliamentary vote for women. A First Class Honours Graduate in Law, the determined and charismatic Christabel revitalised the women’s suffrage campaign by rousing thousands of women to become suffragettes and to demand rather than ask politely for their democratic citizenship rights.”

Deeds not Words: the story of women’s rights, then and now, by Helen Pankhurst

“Despite huge progress since the original suffragette campaigns and wave after wave of new feminism, women are still not equal. On the centenary of one of the greatest steps forward for women - the Vote - suffragette descendent and campaigner Helen Pankhurst takes the reader on a journey exploring how women’s lives have changed over the last 100 years, and how we can take things even further.”

The Century Girls: the final word from the women who’ve lived the last hundred years of British history, by Tessa Dunlop

“This title offers a celebration of the 100 years since British women got the vote, told, in their own voices, by seven centenarians - The Century Girls.”

Suffragettes: the fight for votes for women, by Joyce Marlow (ed.)

“Drawing on extracts from diaries, newspapers, letters, and journals, Joyce Marlow tells the story of the women’s suffrage movement. The movement lasted for several decades, and this text covers both familiar and less well-known events.”

“In the Museum of London lies a purple feather, once worn by the suffragette leader Emmeline Pankhurst. The plumed hat was an essential part of her ultra-feminine image. For over half a century, from the High Victorian era to the Jazz Age, it was de rigueur to deck your head with plumage, wings - even entire birds. An insatiable global trade in feathers brought birdlife to the brink of extinction: snowy egrets, crested grebes, jewel-like hummingbirds. At its Edwardian peak, the plumage trade was worth a staggering £2m a year to Britain - £204m in today’s money.

“The struggle to save the birds was a woman’s campaign. Its aim was simple: to stamp out the fashion for feathers in hats. Leading the fight was Etta Lemon, and she was known as ‘Mother of the Birds’. This book explores two very different heroines: Mrs Pankhurst and Mrs Lemon - one lionised, the other forgotten - and their rival, overlapping campaigns.”