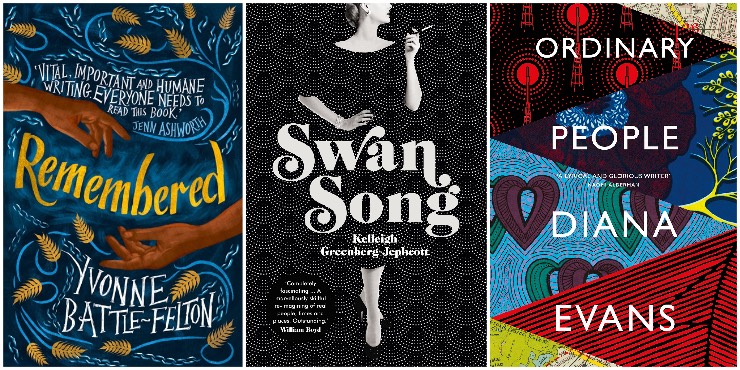 The prestigious Women’s Prize for Fiction celebrates the best books by women each year. Why not reserve a title from the 2019 longlist today?

“Narrated from the perspectives of the various selves within Ada, and based in the author’s realities, Freshwater explores the metaphysics of identity and being.”

“In this unnamed city, to be interesting is dangerous. Middle sister, our protagonist, is busy attempting to keep her mother from discovering her maybe-boyfriend and to keep everyone in the dark about her encounter with Milkman.

“But when first brother-in-law sniffs out her struggle, and rumours start to swell, middle sister becomes ‘interesting’. The last thing she ever wanted to be. To be interesting is to be noticed and to be noticed is dangerous.”

My Sister, the Serial Killer, by Oyinkan Braithwaite

“When Korede’s dinner is interrupted one night by a distress call from her sister, Ayoola, she knows what’s expected of her: bleach, rubber gloves, nerves of steel and a strong stomach. This’ll be the third boyfriend Ayoola’s dispatched in, quote, self-defence and the third mess that her lethal little sibling has left Korede to clear away. She should probably go to the police for the good of the menfolk of Nigeria, but she loves her sister and, as they say, family always comes first.

“Until, that is, Ayoola starts dating the fit doctor where Korede works as a nurse. Korede’s long been in love with him, and isn’t prepared to see him wind up with a knife in his back: but to save one would mean sacrificing the other.”

“They told him everything. He told everyone else.

“Over countless martini-soaked Manhattan lunches, they shared their deepest secrets and greatest fears. On exclusive yachts sailing the Mediterranean, on private jets streaming towards Jamaica, on Yucatán beaches in secluded bays, they gossiped about sex, power, money, love and fame. They never imagined he would betray them so absolutely.”

“It is 1910 and Philadelphia is burning. The last place Spring wants to be is in the rundown, coloured section of a hospital surrounded by the groans of sick people and the bickering ghost of her dead sister. But as her son Edward lays dying, she has no other choice.

“There are whispers that Edward drove a streetcar into a shop window. Some people think it was an accident, others claim that it was his fault, the police are certain that he was part of a darker agenda. Is he guilty? Can they find the truth?

“All Spring knows is that time is running out. She has to tell him the story of how he came to be. With the help of her dead sister, newspaper clippings and reconstructed memories, she must find a way to get through to him. To shatter the silences that her governed her life, she will do everything she can to lead him home.”

“In the house of Helios, god of the sun and mightiest of the Titans, a daughter is born. But Circe has neither the look nor the voice of divinity, and is scorned and rejected by her kin.

“Increasingly isolated, she turns to mortals for companionship, leading her to discover a power forbidden to the gods: witchcraft. When love drives Circe to cast a dark spell, wrathful Zeus banishes her to the remote island of Aiaia. There she learns to harness her occult craft, drawing strength from nature.

“But she will not always be alone; many are destined to pass through Circe’s place of exile, entwining their fates with hers. The messenger god, Hermes. The craftsman, Daedalus. A ship bearing a golden fleece. And wily Odysseus, on his epic voyage home.”

An American Marriage, by Tayari Jones

“Newlyweds Celestial and Roy are the embodiment of both the American Dream and the New South. He is a young executive, and she is an artist on the brink of an exciting career. But as they settle into the routine of their life together, they are ripped apart by circumstances neither could have imagined. Roy is arrested and sentenced to 12 years for a crime Celestial knows he didn’t commit.

“Though fiercely independent, Celestial finds herself bereft and unmoored, taking comfort in Andre, her childhood friend and best man at their wedding. As Roy’s time in prison passes, she is unable to hold on to the love that has been her centre.”

“South London, 2008. Two couples find themselves at a moment of reckoning, on the brink of acceptance or revolution.

“Melissa has a new baby and doesn’t want to let it change her but, in the crooked walls of a narrow Victorian terrace, she begins to disappear. Michael, growing daily more accustomed to his commute, still loves Melissa but can’t get close enough to her to stay faithful.

“Meanwhile out in the suburbs, Stephanie is happy with Damian and their three children, but the death of Damian’s father has thrown him into crisis - or is it something or someone else? Are they all just in the wrong place? Are any of them prepared to take the leap?”

Praise Song for the Butterflies, by Bernice L. McFadden

“Abebe Tsikata lives a comfortable, happy life in West Africa as the privileged nine-year-old daughter of a government employee and stay-at-home mother. But when the Tsikatas’ idyllic lifestyle takes a turn for the worse, Abebe’s father, following his mother’s advice, places her in a religious shrine, hoping that the sacrifice of his daughter will serve as religious atonement for the crimes of his ancestors.

“Unspeakable acts befall Abebe for the 15 years she is enslaved within the shrine. When she is finally rescued, broken and battered, she must struggle to overcome her past, endure the revelation of family secrets, and learn to trust and love again.”

“When her city falls to the Greeks, Briseis’s old life is shattered. She is transformed from queen to captive, from free woman to slave, awarded to the god-like warrior Achilles as a prize of war. And she’s not alone. On the same day, and on many others in the course of a long and bitter war, innumerable women have been wrested from their homes and flung to the fighters.

“The Trojan War is known as a man’s story: a quarrel between men over a woman, stolen from her home and spirited across the sea. But what of the other women in this story, silenced by history? What words did they speak when alone with each other, in the laundry, at the loom, when laying out the dead?”

“Suppose you and Pa were gone, and we were lost. What would happen then?

“A family in New York packs the car and sets out on a road trip. A mother, a father, a boy and a girl, they head south west, to the Apacheria, the regions of the US which used to be Mexico. They drive for hours through desert and mountains. They stop at diners when they’re hungry and sleep in motels when it gets dark. The little girl tells surreal knock knock jokes and makes them all laugh. The little boy educates them all and corrects them when they’re wrong. The mother and the father are barely speaking to each other.”

“The popular Beijing Duck House in Rockville, Maryland has been serving devoted regulars for decades, but behind the staff’s professional masks simmer tensions, heartaches and grudges from decades of gruelling service work.

“When Duck House manager Jimmy Han tries to sell his father’s old restaurant to move to a more upscale location, these conflicts are set loose, testing the bonds of this working family.”

The Pisces, by Melissa Broder

“Lucy, staying in a beautiful home overlooking Venice Beach, can find no peace from her misery - not in therapy, not in Tinder hook-ups, not in her sister’s dog’s unquestioning devotion, not in ruminating on the ancient Greeks. Yet everything changes when she becomes entranced by an eerily attractive swimmer one night while sitting alone on the beach rocks.”

“Teenage Silvie is living in a remote Northumberland camp as an exercise in experimental archaeology. Her father is an abusive man, obsessed with recreating the discomfort, brutality and harshness of Iron Age life.

“Behind and ahead of Silvie’s narrative is the story of a bog girl, a sacrifice, a woman killed by those closest to her, and as the hot summer builds to a terrifying climax, Silvie and the Bog girl are in ever more terrifying proximity.”

“When Alina’s brother-in-law defects to the West, she and her husband become persons of interest to the secret services, causing both of their careers to come grinding to a halt. As the strain takes its toll on their marriage, Alina turns to her aunt for help - the wife of a communist leader and a secret practitioner of the old folk ways.

“Set in 1970s Communist Romania, this novella-in-flash draws upon magic realism to weave a tale of everyday troubles.”