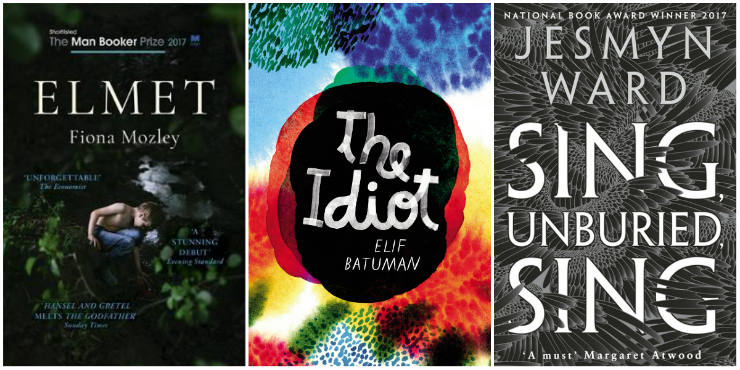 The prestigious Women’s Prize for Fiction celebrates the writing of women throughout the world. Why not reserve a title from the 2018 longlist today?

“This novel is a post-post apocalyptic Alice in Wonderland, a story which tells itself and then consumes itself. It’s a place where language glows, where words buzz and sparkle and finally implode. It’s a novel which twists and writhes with all the terrifying precision of a tiny fish in an Escher lithograph - a book where the mere telling of a story is the end of certainty.”

The Idiot, by Elif Batuman

“Selin, a tall, highly strung Turkish-American from New Jersey turns up at Harvard and finds herself dangerously overwhelmed by the challenges and possibilities of adulthood. She studies linguistics and literature, teaches ESL and spends a lot of time thinking about what language - and languages - can and cannot do.

“Along the way she befriends Svetlana, a cosmopolitan Serb, and obsesses over Ivan, a mathematician from Hungary. The two conduct a hilarious relationship that culminates with Selin spending the summer teaching English in a Hungarian village and enduring a series of surprising excursions.

“Throughout her journeys, Selin ponders profound questions about how culture and language shape who we are, how difficult it is to be a failed writer, and how baffling love is.”

“There are three things you should know about Elsie. The first thing is that she’s my best friend.The second is that she always knows what to say to make me feel better. And the third thing - might take a little bit more explaining.

“84-year-old Florence has fallen in her flat at Cherry Tree Home for the Elderly. As she waits to be rescued, Florence wonders if a terrible secret from her past is about to come to light; and, if the charming new resident is who he claims to be, why does he look exactly a man who died 60 years ago?”

Read our Meet the Author interview with Joanna Cannon →

“After attending school in Calcutta, Benny settles in Rangoon, then part of the British Empire, and falls in love with Khin, a woman who is part of a long-persecuted ethnic minority group, the Karen.

“World War II comes to Southeast Asia, and Benny and Khin must go into hiding in the eastern part of the country during the Japanese Occupation, beginning a journey that will lead them to change the country’s history.”

“Anna Kerrigan, nearly 12 years old, accompanies her father to the house of a man who, she gleans, is crucial to the survival of her father and her family. Anna observes the uniformed servants, the lavishing of toys on the children, and a secret pact between her father and Dexter Styles.

“Years later, her father has disappeared and the country is at war. Anna works at the Brooklyn Navy Yard where she becomes the first female diver, the most dangerous and exclusive of occupations, repairing the ships that will help America win the war. She is the sole provider for her mother, a farm girl who had a brief and glamorous career as a Ziegfield folly, and her lovely, severely disabled sister.

“At a night club, she chances to meet Styles, the man she visited with her father before he vanished, and she begins to understand the complexity of her father’s life, the reasons he might have been murdered.”

Manhattan Beach has also been longlisted for the 2018 Walter Scott Prize.

The Mermaid and Mrs Hancock, by Imogen Hermes Gowar

“One September evening in 1785, the merchant Jonah Hancock hears urgent knocking on his front door. One of his captains is waiting eagerly on the step. He has sold Jonah’s ship for what appears to be a mermaid. As gossip spreads through the docks, coffee shops, parlours and brothels, everyone wants to see Mr Hancock’s marvel. Its arrival spins him out of his ordinary existence and through the doors of high society.

“At an opulent party, he makes the acquaintance of Angelica Neal, the most desirable woman he has ever laid eyes on - and a courtesan of great accomplishment. This meeting will steer both their lives onto a dangerous new course, on which they will learn that priceless things come at the greatest cost. What will be the cost of their ambitions? And will they be able to escape the destructive power mermaids are said to possess?”

Read our Meet the Author interview with Imogen Hermes Gowar →

“In Sight a woman recounts her progress to motherhood, while remembering the death of her own mother, and the childhood summers she spent with her psychoanalyst grandmother.

“Woven among these personal recollections are significant events in medical history: Wilhelm Rontgen’s discovery of the X-ray and his production of an image of his wife’s hand; Sigmund Freud’s development of psychoanalysis and the work that he did with his daughter, Anna; John Hunter’s attempts to set surgery on a scientific footing and his work, as a collaborator with his brother William and the artist Jan van Rymsdyk, on the anatomy of pregnant bodies.

“What emerges is the realisation that while the search for understanding might not lead us to an absolute truth, it is an end in itself.”

“Eleanor Oliphant leads a simple life. She wears the same clothes to work every day, eats the same meal deal for lunch every day and buys the same two bottles of vodka to drink every weekend. Eleanor Oliphant is happy. Nothing is missing from her carefully timetabled life. Except, sometimes, everything.

“One simple act of kindness is about to shatter the walls Eleanor has built around herself. Now she must learn how to navigate the world that everyone else seems to take for granted - while searching for the courage to face the dark corners she’s avoided all her life.”

When I Hit You: or, a portrait of the writer as a young wife, by Meena Kandasamy

“Seduced by politics and poetry, the unnamed narrator falls in love with a university professor and agrees to be his wife, but what for her is a contract of love is for him a contract of ownership.

“As he sets about reducing her to his idealised version of a kept woman, bullying her out of her life as an academic and writer in the process, she attempts to push back - a resistance he resolves to break with violence and rape.”

When I Hit You has also been nominated for the 2018 Jhalak Prize.

“Daniel is heading north. He is looking for someone. The simplicity of his early life with Daddy and Cathy has turned sour and fearful. They lived apart in the house that Daddy built for them with his bare hands. They foraged and hunted. When they were younger, Daniel and Cathy had gone to school.

“But they were not like the other children then, and they were even less like them now. Sometimes Daddy disappeared, and would return with a rage in his eyes. But when he was at home he was at peace. He told them that the little copse in Elmet was theirs alone. But that wasn’t true. Local men, greedy and watchful, began to circle like vultures. All the while, the terrible violence in Daddy grew.”

Elmet was also shortlisted for the 2017 Man Booker Prize.

The Ministry of Utmost Happiness, by Arundhati Roy

“The Ministry of Utmost Happiness takes us on a journey of many years, the story spooling outwards from the cramped neighbourhoods of Old Delhi into the burgeoning new metropolis and beyond, to the Valley of Kashmir and the forests of Central India, where war is peace and peace is war, and where, from time to time, ‘normalcy’ is declared.

“Anjum, who used to be Aftab, unrolls a threadbare carpet in a city graveyard that she calls home. A baby appears quite suddenly on a pavement, a little after midnight, in a crib of litter. The enigmatic S. Tilottama is as much of a presence as she is an absence in the lives of the three men who loved her.

“The Ministry of Utmost Happiness is at once an aching love story and a decisive remonstration. It is told in a whisper, in a shout, through tears and sometimes with a laugh. Its heroes are people who have been broken by the world they live in and then rescued, mended by love and by hope. For this reason, they are as steely as they are fragile, and they never surrender.”

The Ministry of Utmost Happiness was also longlisted for the 2017 Man Booker Prize.

See What I Have Done, by Sarah Schmidt

“When her father and step-mother are found brutally murdered on a summer morning in 1892, Lizzie Borden - 32-years-old and still living at home - immediately becomes a suspect. But after a notorious trial, she is found innocent, and no one is ever convicted of the crime.

“Meanwhile, others in the claustrophobic Borden household have their own motives and their own stories to tell: Lizzie’s unmarried older sister, a put-upon Irish housemaid, and a boy hired by Lizzie’s uncle to take care of a problem.”

A Boy in Winter, by Rachel Seiffert

“An early November morning in 1941, only weeks after the German invasion, a small Ukrainian town is overrun by the SS.

“Deft, spare and devastating, Rachel Seiffert’s new novel tells of the three days that follow and the lives that are overturned in the process.”

Home Fire was also longlisted for the 2017 Man Booker Prize.

The Trick to Time, by Kit de Waal

“Birmingham, 1972. Mona is a young Irish girl in a big city, with the thrill of a new job and a room of her own in a busy boarding house. On her first night out in town, she meets William, a charming Irish boy with an easy smile and an open face. They embark upon a dizzying love affair, a whirlwind marriage, an unexpected pregnancy - before a sudden tragedy tears them apart.

“Decades later, Mona pieces together the memories of the years that separate them. But can she ever learn to love again?”

“An intimate portrait of a family and an epic tale of hope and struggle, Sing, Unburied, Sing examines the ugly truths at the heart of the American story and the power – and limitations – of family bonds.

“Jojo is thirteen years old and trying to understand what it means to be a man. His mother, Leonie, is in constant conflict with herself and those around her. She is black and her children’s father is white. Embattled in ways that reflect the brutal reality of her circumstances, she wants to be a better mother, but can’t put her children above her own needs, especially her drug use.

“When the children’s father is released from prison, Leonie packs her kids and a friend into her car and drives north to the heart of Mississippi and Parchman Farm, the State Penitentiary. At Parchman, there is another boy, the ghost of a dead inmate who carries all of the ugly history of the South with him in his wandering. He too has something to teach Jojo about fathers and sons, about legacies, about violence, about love.”