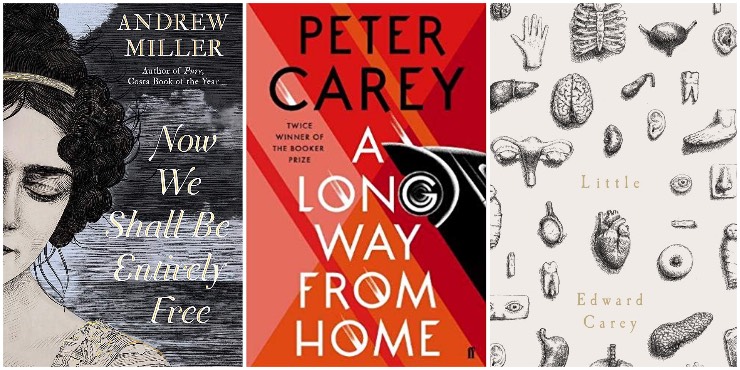 “Born in Alsace in 1761, the unsightly, diminutive Marie Grosholtz is quickly nicknamed ‘Little’. Orphaned at the age of six, she finds employment in Bern, Switzerland, under the charge of reclusive anatomist, Dr Curtius. In time the unlikely pair form an unlikely bond, and together they pursue an unusual passion: the fine art of wax-modelling.

“Forced to flee their city, the doctor and his protégée head for the seamy streets of Paris where they open an exhibition hall for their uncanny creations. Though revolution approaches, the curious-minded flock to see the wax heads, eager to scrutinise the faces of royalty and reprobates alike. At ‘The Cabinet of Doctor Curtius’, heads are made, heads are displayed, and a future is built from wax.

“From the gutters of pre-revolutionary France to the luxury of the Palace of Versailles, from casting the still-warm heads of The Terror to finding something very like love, Little is the unforgettable story of how a ‘bloodstained crumb of a girl’ went on to shape the world…”

A Long Way from Home, by Peter Carey

“Irene Bobs loves fast driving. Her husband is the best car salesman in rural south eastern Australia. Together with Willie, their lanky navigator, they embark upon the Redex Trial, a brutal race around the continent, over roads no car will ever quite survive.”

After the Party, by Cressida Connolly

“It is the summer of 1938 and Phyllis Forrester has returned to England after years abroad. Moving into her sister’s grand country house, she soon finds herself entangled in a new world of idealistic beliefs and seemingly innocent friendships. Fevered talk of another war infiltrates their small, privileged circle, giving way to a thrilling solution: a great and charismatic leader, who will restore England to its former glory.

“At a party hosted by her new friends, Phyllis lets down her guard for a single moment, with devastating consequences.”

“When two English brothers take the helm of a Barbados sugar plantation, nervousness and fear run high. Washington Black - an eleven year-old field slave who has known no other life - is aghast to find himself selected as personal servant to one of these men. His new master is the eccentric Christopher Wilde - naturalist, explorer, scientist, inventor and abolitionist - whose single-minded pursuit of the perfect aerial machine mystifies all around him.

“Through Wilde, Washington is initiated into a world of wonder: a world where even a boy born in chains may embrace a life of dignity and meaning.”

The Western Wind, by Samantha Harvey

“Oakham, near Bruton, is a tiny village by a big river without a bridge. When a man is swept away by the river in the early hours of Shrove Saturday, an explanation has to be found. Was it murder, or suicide, or an accident?

“The whole story is relayed by the village priest, John Reve, who in his role as confessor is privy to a lot of information that others have not. But will he be able to explain what happened to the victim, Tom Newman, the wealthiest, most capable and industrious man in the village? And what will happen if he can’t?”

“Aboard the USS Orbis as it embarks from Boston and surges south to round Cape Horn, Hiram Carver takes up his first position as ship’s doctor. Callow and anxious among the seasoned sailors, he struggles in this brutal floating world until he meets William Borden.

“Borden. The Hero of the Providence. A legend among sailors, his presence hypnotises Carver, even before he hears the man’s story. Years before, Borden saved several men from mutiny and led them in a dinghy across the Pacific to safety.

“Every ship faces terror from the deep. What happens on the Orbis binds Carver and Borden together forever. When Carver recovers, and takes up a role at Boston’s Asylum for the Insane, he will meet Borden again - broken, starving, overwhelmed by the madness that has shadowed him ever since he sailed on the Providence.”

Now We Shall Be Entirely Free, by Andrew Miller

“One rain-swept February night in 1809, an unconscious man is carried into a house in Somerset. He is Captain John Lacroix, home from Britain’s disastrous campaign against Napoleon’s forces in Spain.

“Gradually Lacroix recovers his health, but not his peace of mind - he cannot talk about the war or face the memory of what happened in a village on the gruelling retreat to Corunna. After the command comes to return to his regiment, he sets out instead for the Hebrides, with the vague intent of reviving his musical interests and collecting local folksongs.

“Lacroix sails north incognito, unaware that he has far worse to fear than being dragged back to the army: a vicious English corporal and a Spanish officer are on his trail, with orders to kill. The haven he finds on a remote island with a family of free-thinkers and the sister he falls for are not safe, at all.”

“It is 1945, and London is still reeling from the Blitz and years of war. 14-year-old Nathaniel and his sister, Rachel, are apparently abandoned by their parents, left in the care of an enigmatic figure named The Moth. They suspect he might be a criminal, and grow both more convinced and less concerned as they get to know his eccentric crew of friends: men and women with a shared history, all of whom seem determined now to protect, and educate (in rather unusual ways) Rachel and Nathaniel. But are they really what and who they claim to be?

“A dozen years later, Nathaniel begins to uncover all he didn’t know or understand in that time, and it is this journey that is told in this novel.”

The Wanderers, by Tim Pears

“1912. Leo is on a journey. Aged thirteen and banished from the secluded farm of his childhood, he travels through Devon, grazing on berries and sleeping in copses. Behind him lies the past, and before him the West Country, spread out like a tapestry.

“But a wanderer is never alone for long, try as he might - and soon Leo is taken in by gypsies, with their waggons, horses, and vivid attire. Yet he knows he cannot linger, and must forge on to Penzance, towards the western horizon.

“Lottie is at home. Life on the estate continues as usual, yet nothing is as it was. Her father is distracted by the promise of new love and Lottie is increasingly absorbed in the natural world: the profusion of wild flowers in the meadow, the habits of predators, and the mysteries of anatomy. And of course, Leo is absent. How will the two young people ever find each other again?”

The Long Take, by Robin Robertson

“Walker is a D-Day veteran with post-traumatic stress disorder; he can’t return home to rural Nova Scotia, and looks instead to the city for freedom, anonymity and repair. As he moves from New York to Los Angeles and San Francisco we witness a crucial period of fracture in American history, one that also allowed film noir to flourish. The Dream had gone sour but - as those dark, classic movies made clear - the country needed outsiders to study and dramatise its new anxieties.”

All the Lives We Never Lived, by Anuradha Roy

“‘In my childhood, I was known as the boy whose mother had run off with an Englishman’ - so begins the story of Myshkin and his mother, Gayatri, who is driven to rebel against tradition and follow her artist’s instinct for freedom.

“Freedom of a different kind is in the air across India. The fight against British rule is reaching a critical turn. The Nazis have come to power in Germany. At this point of crisis, two strangers arrive in Gayatri’s town, opening up for her the vision of other possible lives.

“What took Myshkin’s mother from India to Dutch-held Bali in the 1930s, ripping a knife through his comfortingly familiar environment? Excavating the roots of the world in which he was abandoned, Myshkin comes to understand the connections between anguish at home and a war-torn universe overtaken by patriotism.”

“Two years after the death of Henry VIII, England is sliding into chaos. The nominal king, Edward VI, is eleven years old. His uncle Edward Seymour, Lord Hertford, rules as Protector. The extirpation of the old religion by radical Protestants is stirring discontent among the populace while the Protector’s prolonged war with Scotland is proving a disastrous failure and threatens to involve France. Worst of all, the economy is in collapse, inflation rages and rebellion is stirring among the peasantry.

“Since the old King’s death, Matthew Shardlake has been working as a lawyer in the service of Henry’s younger daughter, the Lady Elizabeth. The gruesome murder of Edith Boleyn, the wife of John Boleyn - a distant Norfolk relation of Elizabeth’s mother - which could have political implications for Elizabeth, brings Shardlake and his assistant Nicholas Overton to the summer assizes at Norwich.”