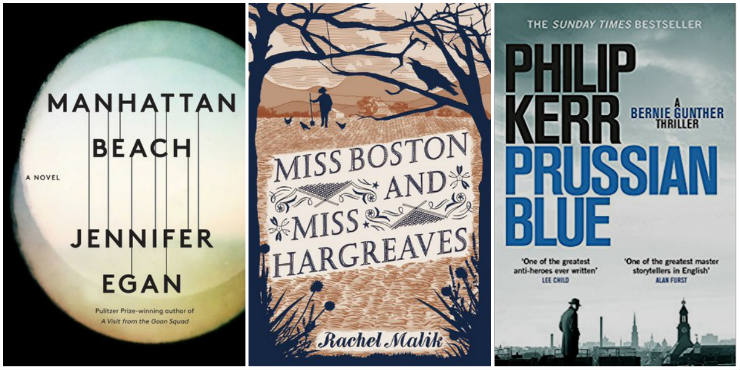 The books on this year’s Walter Scott longlist cover 1765-1956 and range in setting from the UK to Brooklyn, Grenada, Germany, Ireland and Peru.

The award, founded in 2010, celebrates ‘quality, innovation and longevity of writing in the English language’ among historical novel writers. It is named for Sir Walter Scott, who is commonly regarded as ‘the founding father of the historical novel’. His title Waverley, published in 1814, established the genre.

The Clocks In This House All Tell Different Times, by Xan Brooks

“Summer 1923: the modern world. Orphaned Lucy Marsh climbs into the back of an old army truck and is whisked off to the woods north of London - a land haunted by the past, where lost souls and monsters conceal themselves in the trees. In a sunlit clearing she meets the ‘funny men’, a quartet of disfigured ex-soldiers named after Dorothy’s companions in The Wonderful Wizard of Oz. Here are the loved and the damaged, dark forests and darker histories and the ever-present risk of discovery and violent retribution.”

“It is 1792 and Europe is seized by political turmoil and violence. Lizzy Fawkes has grown up in Radical circles where each step of the French Revolution is followed with eager idealism.

“But she has recently married John Diner Tredevant, a property developer who is heavily invested in Bristol’s housing boom, and he has everything to lose from social upheaval and the prospect of war. Soon his plans for a magnificent terrace built above the 200ft drop of the Gorge come under threat.”

“Anna Kerrigan, nearly 12 years old, accompanies her father to the house of a man who, she gleans, is crucial to the survival of her father and her family. Anna observes the uniformed servants, the lavishing of toys on the children, and a secret pact between her father and Dexter Styles.

“Years later, her father has disappeared and the country is at war. Anna works at the Brooklyn Navy Yard where she becomes the first female diver, the most dangerous and exclusive of occupations, repairing the ships that will help America win the war. She is the sole provider for her mother, a farm girl who had a brief and glamorous career as a Ziegfield folly, and her lovely, severely disabled sister.

“At a night club, she chances to meet Styles, the man she visited with her father before he vanished, and she begins to understand the complexity of her father’s life, the reasons he might have been murdered.”

The Last Man in Europe: a novel, by Dennis Glover

“April, 1947. In a run-down farmhouse on a remote Scottish island, George Orwell begins his last and greatest work: Nineteen Eighty-Four.

“Forty-four years old and suffering from the tuberculosis that within three winters will take his life, Orwell comes to see the book as his legacy – the culmination of a career spent fighting to preserve the freedoms which the wars and upheavals of the twentieth century have threatened. Completing the book is an urgent challenge, a race against death.”

“Martinique, 1765, and brothers Emile and Lucien are charged by their French master, Father Cleophas, with a mission. They must return to Grenada, the island they once called home, and smuggle back the 42 slaves claimed by English invaders at the hospital plantation in Fort Royal.

“While Lucien, barely in his teens, sees the trip as a great adventure, the older and worldlier Emile has no illusions about the dangers they will face. But with no choice other than to obey Cleophas - and sensing the possibility, however remote, of finding his first love Celeste - he sets out with his brother on this ‘reckless venture’.”

In the 12th Bernie Gunther thriller:

“It’s 1956 and Bernie is on the run. Ordered by Erich Mielke, deputy head of the East German Stasi, to murder Bernie’s former lover by thallium poisoning, he finds his conscience is stronger than his desire not to be murdered in turn. Now he must stay one step ahead of Mielke’s retribution.

“The man Mielke has sent to hunt him is an ex-Kripo colleague, and as Bernie pushes towards Germany he recalls their last case together. In 1939, Bernie was summoned by Reinhard Heydrich to the Berghof: Hitler’s mountain home in Obersalzberg. A low-level German bureaucrat had been murdered, and the Reichstag deputy Martin Bormann, in charge of overseeing renovations to the Berghof, wants the case solved quickly. If the Fuhrer were ever to find out that his own house had been the scene of a recent murder - the consequences wouldn’t bear thinking about.”

The Draughtsman, by Robert Lautner

“1944, Germany. Ernst Beck’s new job marks an end to months of unemployment. Working for Erfurt’s most prestigious engineering firm, Topf & Sons, means he can finally make a contribution to the war effort, provide for his beautiful wife, Etta, and make his parents proud.

“But there is a price. Ernst is assigned to the firm’s smallest team - the Special Ovens Department. Reporting directly to Berlin his role is to annotate plans for new crematoria that are deliberately designed to burn day and night. Their destination: the concentration camps. Topf’s new client: the SS.

“As the true nature of his work dawns on him, Ernst has a terrible choice to make: turning a blind eye will keep him and Etta safe, but that’s little comfort if staying silent amounts to collusion in the death of thousands.”

“Early one October morning, Grace’s mother snatches her from sleep and brutally cuts off her hair, declaring, ‘You are the strong one now’.

“With winter close at hand and Ireland already suffering, Grace is no longer safe at home. And so her mother outfits Grace in men’s clothing and casts her out. When her younger brother Colly follows after her, the two set off on a life-changing odyssey in the looming shadow of the Great Famine. To survive, Grace will become a boy, a bandit, a penitent and finally, a woman.”

The Wardrobe Mistress, by Patrick McGrath

“January, 1947. The war has been over for two years. London’s in ruins. To make matters worse, one of the great stage actors of the day, Charlie Grice, has suddenly died.

“His wife Joan, the wardrobe mistress, is grief-stricken. She’s persuaded to attend a benefit performance of his last play, and watch an understudy in Charlie’s role. She dreads it. But when the actor appears onstage, Joan is startled to see that behind the new man’s eyes burns the living spirit of her husband.

“Later, backstage, she meets him, and yes, Charlie’s coming through. There’s no doubt in her mind. She’s giddy with elation. She befriends the young actor. She starts to give him Charlie’s clothes. The friendship soon becomes a love affair, Joan all the while seeing within the understudy the living ghost of her husband. Then one night, by chance, as she goes through Charlie’s wardrobe, she uncovers his horrifying secret. She’s devastated.”

“When Rene Hargreaves is billeted to Starlight Farm as a Land Girl, far from the city where she grew up, she finds farmer Elsie Boston and her country ways strange at first. Yet over the days and months Rene and Elsie come to understand and depend on each other. Soon they can no longer imagine a life apart.

“But a visitor from Rene’s past threatens the life they have built together, a life that has always kept others at a careful distance. Soon they are involved in a war of their own that endangers everything and will finally expose them to the nation’s press and the full force of the law.”

The Gallows Pole, by Benjamin Myers

“From his remote moorland home David Hartley assembles a gang of weavers and land workers to embark upon a criminal enterprise that will capsize the economy and become the biggest fraud in British history. They are the Cragg Vale Coiners and their business is clipping - the forging of coins, a treasonous offence punishable by death.”

The Horseman, by Tim Pears

“In a forgotten valley, on the Devon-Somerset border, the seasons unfold, marked only by the rituals of the farming calendar. Twelve-year-old Leopold Sercombe skips school to help his father, a carter. Skinny and pale, with eyes as dark as sloes, Leo dreams of a job on the Master’s stud farm.

“As ploughs furrow the hard January fields, the Master’s daughter, young Miss Charlotte, shocks the estate’s tenants by wielding a gun at the annual shoot. Spring comes, Leo watches swallows build their nests, hedgerows thrum with life and days lengthen into summer. Leo is breaking a colt for his father when a boy dressed in a Homburg, breeches and riding boots appears. Peering under the stranger’s hat, he discovers Charlotte. And so a friendship begins, bound by a deep love of horses, but divided by rigid social boundaries - boundaries that become increasingly difficult to navigate as they approach adolescence.”

The Bedlam Stacks, by Natasha Pulley

“Deep in uncharted Peru, the holy town of Bedlam stands at the edge of a forest. The shrine statues move, and anyone who crosses the border dies. But somewhere inside are cinchona trees, whose bark yields quinine: the only known treatment for malaria. On the other side of the Pacific, it is 1859 and India is ravaged by the disease. The hunt for a reliable source of quinine is critical and in its desperation, the India Office searches out its last qualified expeditionary.

“Struggling with a terrible injury from his last mission and the strange occurrences at his family’s ruined estate, Merrick Tremayne finds himself under orders to bring back cinchona cuttings at any cost and dispatched, against his own better judgement, to Bedlam. There he meets Raphael, a priest around whom the villagers spin unsettlingly familiar stories of impossible disappearances and living stone.”