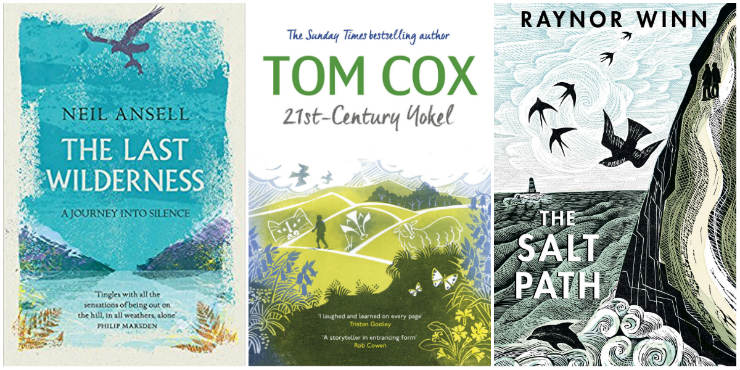 The Wainwright Golden Beer Book Prize for nature writing celebrates the best books about nature, the outdoors and UK travel. Why not take a book from the longlist outside?

“21st-Century Yokel explores the way we can be tied inescapably to landscape, whether we like it or not, often through our family and our past. It contains owls, badgers, ponies, beavers, otters, bats, bees, scarecrows, dogs, ghosts, Tom’s loud and excitable dad and, yes, even a few cats. It’s full of Devon’s local folklore - the ancient kind, and the everyday kind - and provincial places and small things. But what emerges from this focus on the small are themes that are broader and bigger and more definitive.”

Hidden Nature: a voyage of discovery. by Alys Fowler

“Leaving her garden to the mercy of the slugs, award-winning writer Alys Fowler set out in an inflatable kayak to explore Birmingham’s canal network, full of little-used waterways where huge pike skulk and kingfishers dart. Her book is about noticing the wild everywhere and what it means to see beauty where you least expect it. What happens when someone who has learned to observe her external world in such detail decides to examine her internal world with the same care?

“Beautifully written, honest and very moving, Hidden Nature is also the story of Alys Fowler’s emotional journey: above all, this book is about losing and finding, exploring familiar places and discovering unknown horizons.”

Outskirts: living life on the edge of the green belt, by John Grindrod

“Outskirts explores the origins of Britain’s green belt . It will chart the genesis of the idea, which grew from romantic 19th-century notions of the countryside and our past; the pioneers behind organisations such as the National Trust; and the green belt’s place in the landscape and psyche of post-war Britain.”

Islander: a journey around our archipelago, by Patrick Barkham

“Britain is an archipelago made up of two large islands and 6,289 smaller ones. Some, like the Isle of Man, resemble miniature nations, with their own language and tax laws; others, like Ray Island in Essex, are abandoned and mysterious places haunted by myths, ghosts and foxes.

“In this evocative and vividly observed book, Patrick Barkham explores some of the most beautiful landscapes in Britain as he travels to ever-smaller islands in search of their special magic.”

The Secret Life of Cows, by Rosamund Young

“Cows can love, play games, bond, and form strong life friendships. They can sulk, they can hold grudges, they can have preferences and can be vain. In this insight into this secret life of cows, the author argues that compassion in farming makes sound economical as well as ethical sense.”

“Owls have captivated the human imagination for millennia. We have fixated on this night hunter as predator, messenger, emblem of wisdom, something pretty to print on a tote bag or portent of doom.

“Miriam Darlington sets out to tell a new story. Her fieldwork begins with wild encounters in the British Isles and takes her to the frosted borders of the Arctic. In her watching and deep listening to the natural world, she cleaves myth from reality and will change the way you think of this magnificent creature.”

“John Lister-Kaye has spent a lifetime exploring, protecting and celebrating the British landscape and its creatures. His memoir is the story of a boy’s awakening to the wonders of the natural world.

“Lister-Kaye’s joyous childhood holidays - spent scrambling through hedges and ditches after birds and small beasts, keeping pigeons in the loft and tracking foxes around the edge of the garden - were the perfect apprenticeship for his two lifelong passions: exploring the wonders of nature, and writing about them.”

The Last Wilderness: a journey into silence, by Neil Ansell

“Neil Ansell first visited the Rough Bounds, in the Northwest Highlands of Scotland, decades ago when he was just twenty; it was the wildest landscape he’s ever seen, and was the beginning of years of travel, seeking out the world’s dramatic places.

“In this book, he journeys to the area again, five times over the course of a year, exploring the nature of solitary travel and what effects the seasons can have on a specific place and on a person.”

The Salt Path, by Raynor Winn

“In one devastating week, Raynor and her husband Moth lost their home of 20 years, just as a terminal diagnosis took away their future together. With nowhere else to go, they decided to walk the South West Coast Path: a 630-mile sea-swept trail from Somerset to Dorset, via Devon and Cornwall.

“This ancient, wind-battered landscape strips them of every comfort they had previously known. With very little money for food or shelter, Raynor and Moth carry everything on their backs and wild camp on beaches and clifftops. But slowly, with every step, every encounter, and every test along the way, the walk sets them on a remarkable journey. They don’t know how far they will travel, but - to their surprise - they find themselves on a path to freedom.”

The Seabird’s Cry: the lives and the loves of puffins, gannets and other ocean voyagers, by Adam Nicolson, illustrated by Kate Boxer

“A love-letter to the Shiants and their natural world, this is the story of seabirds - the pattern of their lives, their habitats, the threats they face, and the passions they inspire.”

The Wood: the life and times of Cockshutt Wood, by John Lewis-Stempel

“This is the story of one wood, representative of all the small woods of our landscape and of the sanctuary they provide.

“From January through to December, John Lewis-Stempel records the passage of the seasons in exquisite, lyric prose, as the cuckoo flits through the green shade and in the silence and the wind of winter. He explores from the roots of the oak to its tips, under the black, spicy leaf mould of the woodland floor and up into the mysterious canopy. He offers a unique account of the animals that inhabit this refuge: the fox, the pheasants, the wood mice and the tawny owl, among others. Their births, lives, and deaths are stories that thread through the book from the first page to the last.”

A Wood of One’s Own, by Ruth Pavey

“After years of living in London’s urban jungle, Ruth Pavey dreamt of reconnecting with the British countryside. In pursuit of a haven from the unrest of city life, she embarked on a journey to find the perfect plot of land on which to plant a wood. But creating this would-be sanctuary proved more daunting than she expected.

“In this inspiring memoir, Pavey shares her story of finding peace by sowing her legacy in the form of a wood, one tree at a time.”

“All over the country, there are words disappearing from children’s lives. These are the words of the natural world - Dandelion, Otter, Bramble and Acorn, all gone. The rich landscape of wild imagination and wild play is rapidly fading from our children’s minds.

”“The Lost Words stands against the disappearance of wild childhood. It is a joyful celebration of nature words and the natural world they invoke. With acrostic spell-poems by award-winning writer Robert Macfarlane and hand-painted illustration by Jackie Morris, this enchanting book captures the irreplaceable magic of language and nature for all ages.”