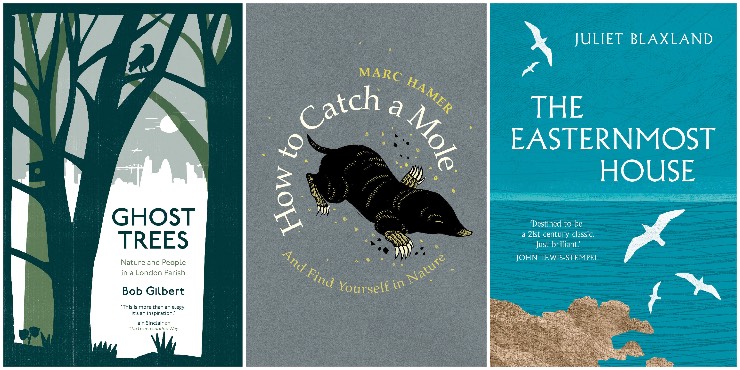 The Wainwright Golden Beer Book Prize for nature writing celebrates the best books about nature, the outdoors and UK travel. Why not enjoy the warmer weather with some titles from the longlist?

“In Underland, Robert Macfarlane takes us on a journey into the worlds beneath our feet. From the ice-blue depths of Greenland’s glaciers, to the underground networks by which trees communicate, from Bronze Age burial chambers to the rock art of remote Arctic sea-caves, this is a deep-time voyage into the planet’s past and future.”

“Global in its geography, gripping in its voice and haunting in its implications, it is a work of huge range and power, and a remarkable new chapter in Macfarlane’s long-term exploration of landscape and the human heart.”

Wilding: the return of nature to a British farm, by Isabella Tree

“Wilding tells the story of a remarkable experiment: the rewilding of the Knepp Estate in West Sussex, the restoration of natural ecological processes, and the stunning recovery of flora and fauna.”

“This volume confronts our waste-making species through the extraordinary and fascinating life of gulls, and the people who watch them. Original, compelling, and unflinching, it is the nature book for our times.”

“Julia Blackburn has always collected things that hold stories about the past, especially the very distant past: mammoth bones, little shells that happen to be two million years old, a flint shaped as a weapon long ago.

“Time Song brings many such stories together as it tells of the creation, the existence and the loss of a country now called Doggerland, a huge and fertile area that once connected the entire east coast of England with mainland Europe, until it was finally submerged by rising sea levels around 5000 BC.”

Our Place: can we save British nature before it is too late?, by Mark Cocker

“Environmental thought and politics have become parts of mainstream cultural life in Britain. The wish to protect wildlife is now a central goal for our society, but where did these ‘green’ ideas come from? And who created the cherished institutions, such as the National Trust or the Royal Society for the Protection of Birds, that are now so embedded in public life with millions of members?

“From the flatlands of Norfolk to the tundra-like expanse of the Flow Country in northern Scotland, acclaimed writer on nature Mark Cocker sets out on a personal quest through the British countryside to find the answers to these questions. He explores in intimate detail six special places that embody the history of conservation or whose fortunes allow us to understand why our landscape looks as it does today.”

How to Catch a Mole and find yourself in nature, by Marc Hamer & Joe McLaren

“Although common, moles are mysterious: their habits are inscrutable, they are anatomically bizarre, and they live completely alone. Marc Hamer has come closer to them than most, both through his long working life out in the Welsh countryside, and his experiences of rural homelessness as a boy, sleeping in hedgerows. Over the years, Marc has learned a great deal about these small, velvet creatures who live in the dark beneath us, and the myths that surround them, and his work has also led him to a wise and uplifting acceptance of the inevitable changes that we all face.

“In this beautiful and meditative book, Marc tells his story and explores what moles, and a life in nature, can tell us about our own humanity and our search for contentment.”

Thinking on My Feet: the small joy of putting one foot in front of another, by Kate Humble

“Thinking on My Feet tells the story of Kate’s walking year - shining a light on the benefits of this simple activity. Kate’s inspiring narrative not only records her walks (and runs) throughout a single year, but also charts her feelings and impressions throughout - capturing the perspectives that only a journey on foot allows - and shares the outcomes: a problem solved, a mood lifted, an idea or opportunity borne.

“As she explores the reasons why we walk - whether for creative energy, challenge and pleasure, or therapeutic benefits, Kate’s reflections and insights will encourage, motivate and spur readers into action. Also featured are Kate’s walks with others who have discovered the magical, soothing effect of putting one foot in front of the other.”

“West Country paramedic Lynne Roper began swimming outdoors after recovering from breast cancer. For the next five years, until a brain tumour made swimming and writing impossibly hard, Lynne kept a journal of swims in over 60 wild places. This is a book for nature lovers, walkers and wild swimmers alike.”

Out of the Woods, by Luke Turner

“After the disintegration of the most significant relationship of his life, the demons Luke Turner has been battling since childhood are quick to return - depression and guilt surrounding his identity as a bisexual man, experiences of sexual abuse, and the religious upbringing that was the cause of so much confusion. It is among the trees of London’s Epping Forest where he seeks refuge.

“But once a place of comfort, it now seems full of unexpected, elusive threats that trigger twisted reactions. No stranger to compulsion, Luke finds himself drawn again and again to the woods, eager to uncover the strange secrets that may be buried there as he investigates an old family rumour of illicit behaviour.”

The Easternmost House, by Juliet Blaxland

”“The Easternmost House is a memoir which describes a year of life on a crumbling cliff at the easternmost edge of England, all year round and in all weathers. Written at the kitchen table of the eponymous house in Suffolk, it is a meditation on nature, on coastal erosion, and on the changing seasons. It describes a life lived in close proximity to the natural world, and evokes the lived-in outdoors of the everyday: of the firewood forager, the improviser, the beachcomber.”

Ghost Trees: nature and people in a London parish, by Bob Gilbert

“Even in the brick and concrete heart of our cities, nature finds a way. Birds and mammals, insects, plants and trees they all manage to thrive in the urban jungle, and Bob Gilbert is their champion and their chronicler. He explores the hidden wildlife of the inner city and its edgelands, finding unexpected beauty in the cracks and crannies, and uncovering the deep and essential relationship that exists between people and nature when they are bound together in such close proximity.

“Beginning from Poplar, the East End area in which he lives, Bob explores, in particular, our relationship with the trees that have helped shape London; from the original wildwood through to the street trees of today. He draws from history and natural history, poetry and painting, myth and magic, and a great deal of walking, observing and listening.”