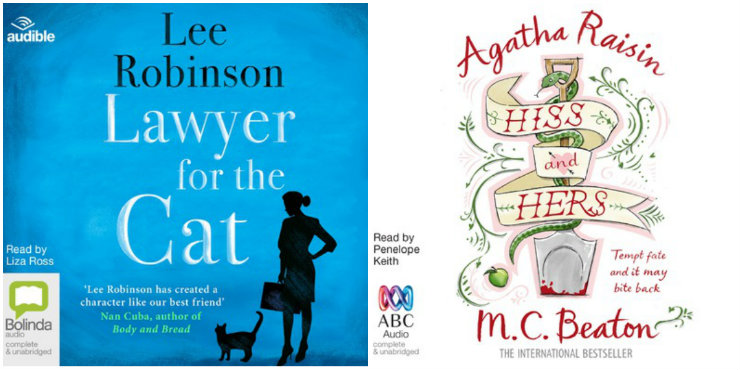 Stock librarian Sophie Green picks out some eAudiobooks that are bound to boost your mood. Get started with BorrowBox →

The Lubetkin Legacy, by Marina Lewycka, read by Toby Longworth

“North London in the 21st century: a place where a son will swiftly adopt an old lady and take her home from hospital to impersonate his dear departed mother, rather than lose the council flat.

“A time of golden job opportunities, though you might have to dress up as a coffee bean or work as an intern at an undertaker or put up with champagne and posh French dinners while your boss hits on you.

“A place where husbands go absent without leave and councillors sacrifice cherry orchards at the altar of new builds.”

Lawyer for the Cat, by Lee Robinson, read by Liza Ross

“Whilst juggling the demands of the court room, an aging mother and a confusing romantic life, will Sally make the right decision for Beatrice? And, as she delves deeper into the case, will she uncover the truth behind the family’s secrets?”

“Val was working as a land girl when the Americans arrived at the nearby airfield in 1944. Mike, a young American airman, came into her life soon after, and so too did Peter Woodhouse, a dog badly treated on a neighbouring farm and taken in by her aunt. Little persuasion was needed for Mike to take Peter Woodhouse to the airbase and over time he became the mascot of the American squad, flying with them whenever their Mosquitoes took to the skies.

“We then follow Val, Mike and Peter Woodhouse as they rebuild a life in England. And Ubi as he returns to Germany at the end of the war and tries to build a new life for himself. His dream is to run a Wall of Death, a circus ring that pits motorcyclists against gravity as they attempt to stay upright at ever increasing speed…”

“She took 1930s New York by storm, working her way up writing copy for R.H. Macy’s to become the highest paid advertising woman in the country. It was a job that, she says, ‘in some ways saved my life, and in other ways ruined it.’

“Now it’s the last night of 1984 and Lillian, 85 years old but just as sharp and savvy as ever, is on her way to a party. It’s chilly enough out for her mink coat and Manhattan is grittier now – her son keeps warning her about a subway vigilante on the prowl – but the quick-tongued poetess has never been one to scare easily.

“On a walk that takes her over 10 miles around the city, she meets bartenders, bodega clerks, security guards, criminals, children, parents and parents-to-be, while reviewing a life of excitement and adversity, passion and heartbreak, illuminating all the ways New York has changed – and has not.”

“Tessa, Sandra and Harriet have been best friends through first crushes, careers, marriage and the trials of motherhood. After 20 years of taking care of everyone else’s every need, they’ve found themselves hitting the big 5-0 and suddenly asking themselves: ‘what about me?!’

“Sandra has a sordid secret, and Harriet is landed with her ailing mother-in-law. Tessa is looking for something to fill the gaping hole left by her youngest daughter’s departure for uni, where it seems she’s now engaged in all sorts of unsavoury activities, if Tessa’s obsessive late-night Facebook stalking is anything to go by.

“When Tessa impulsively responds to an online message from an old flame, she soon finds herself waiting at Heathrow Airport for The One That Got Away. But what will the plane from New York bring her? The man of her dreams, or a whole heap of trouble? And could this be the long-awaited moment for Tessa to seize her life, for herself, with both hands?”

Cartes Postales from Greece, by Victoria Hislop, read by various

“Week after week, the postcards arrive, addressed to a name Ellie does not know, with no return address, each signed with an initial: A.

“With their bright skies, blue seas and alluring images of Greece, these cartes postales brighten her life. After six months, to her disappointment, they cease. But the montage she has created on the wall of her flat has cast a spell. She must see this country for herself.

“On the morning Ellie leaves for Athens, a notebook arrives. Its pages tell the story of a man’s odyssey through Greece. Moving, surprising and sometimes dark, A’s tale unfolds with the discovery not only of a culture but also of a desire to live life to the full once more.”

“Timothy Gandy has kept his lifetime’s ambition secret for 40 years.

“Now, suddenly (if tragically) released from the hen-pecked tedium of his ordinary existence, he is unexpectedly free to realise his dreams. He will embark on a Grand Tour of Europe, following in the footsteps of the aristocrats of the 18th century.

“He anticipates high art, culture and pleasant weather. He never expected to encounter new friendships – and possibly even love – along the way. It seems that Mr Gandy has embarked on the journey of a lifetime …”

Agatha Raisin: Hiss and Hers, by M. C. Beaton, read by Penelope Keith

“Agatha has fallen in love – again. This time it’s the local gardener, George Marston, she has her eye on. But competition for his attention abounds. With her shameless determination Agatha will do anything to get her man – including footing the bill for a charity ball in town just for the chance to dance with him. But when George is a no-show Agatha goes looking for him – and finds he has been murdered, having been bitten by a poisonous snake and buried in a compost heap.

“Agatha and the rest of her crew plunge into an investigation and discover that George had quite a complicated love life. And if Agatha now can’t have George, at least she can have the satisfaction of confronting those women who have and finding a murderer in the process.”

“Marco and Doro’s children have grown up rather different from them: primary schoolteacher Clara craves order and clean bathrooms, son Serge is pretending to his parents that is still doing a Maths Ph.D. at Cambridge, while in fact making loadsamoney in the City; third child Oolie Anna, who has Down’s Syndrome, is desperate to escape home and live on her own.

“Once the truth starts breaking through, who knows what further secrets will be revealed about any of them?”