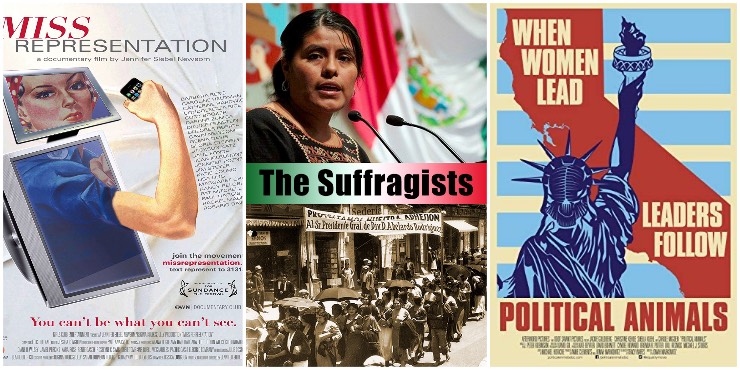 Unfinished Business: The Fight for Women’s Rights is a new exhibition from the British Library that showcases women’s rights activists’ work and battles still to be won. We’re hosting displays and events at Bury St Edmunds, Ipswich County and Lowestoft libraries and creating recommendation lists to mark the occasion.

“The winner of over ten awards including the American Library Associations Notable Video for Adults, Political Animals tells the story of the civil rights struggle of this century - the gay rights movement - through the eyes of first four members of the LGBT Legislative Caucus: Jackie Goldberg, Christine Kehoe, Sheila Kuehl, and Carole Migden.

“Emotionally charged like its subjects, the film follows these four ground-breaking lesbians who took the fight for the causes most personal to them and their communities off the streets and into the halls of government.”

“In this award-winning documentary, Cecilia Fire Thunder, the first female President of the Oglala Sioux tribe, defies a proposed South Dakota law criminalising all abortion by threatening to build a women’s clinic on the sovereign territory of the reservation. Her threats ignite a political firestorm that sets off a chain reaction in the lives of three young Lakota on the Pine Ridge Reservation, forcing each of them to make choices that define who they are and the kind of adults they are becoming.”

“When feminist filmmaker Cassie Jaye sets out to document the mysterious and polarising world of the Men’s Rights Movement, she begins to question her own beliefs. Jaye had only heard about the Men’s Rights Movement as being a misogynist hate-group aiming to turn back the clock on women’s rights, but when she spends a year filming the leaders and followers within the movement, she learns the various ways men are disadvantaged and discriminated against.

“The Red Pill challenges the audience to pull back the veil, question societal norms, and expose themselves to an alternate perspective on gender equality, power and privilege.”

“Cynthia Nixon gives a tour-de-force performance as the legendary 19th Century poet Emily Dickinson in Terence Davies’ A Quiet Passion. Born into privilege in 1830, Dickinson spent most of her life on her parents’ estate in Armherst, Massachusetts.

“In her youth, the introverted Emily is depicted as a fiercely intelligent young woman who exchanges forthright opinions on life, art and patriarchal society. She becomes more reclusive as the years pass, consumed by poetry, but the lack of recognition and respect for her work stokes ever more vociferous dissention.”

Best and Most Beautiful Things

“He had been working on a number of darker-themed documentaries and was determined to find an uplifting story for a future project. The search returned a poignant Helen Keller quote that led Garrett to Perkins School for the Blind outside Boston, a renowned institution where a feature documentary had never before been made. He began volunteering at Perkins. On the last day of his scheduled term, a bubbly student introduced herself - Michelle had found him.

“Best and Most Beautiful Things is a celebration of outcasts everywhere, following a precocious young blind woman who disappears into quirky obsessions and isolation. With humour and bold curiosity, she chases love and freedom in a surprising, sex-positive community.”

Who Does She Think She Is?

“From the producing team that won an Academy Award for Born Into Brothels comes Who Does She Think She Is?, a film that examines some of the most pressing issues of our time: parenting and work, partnering and independence, economics and art. This gorgeously photographed film follows five women artists as they navigate the economic, psychological, and spiritual challenges of making work outside the elite art world.

“From Hawaii’s Big Island to the suburbs of Ohio, from New York City to the deserts of New Mexico, we watch as these women, ranging in age from 27 to 65, fight to honour their vision and their families every day. Interviews with experts like Riane Eisler, Maura Reilly, Courtney E. Martin, Leonard Shlain and the Guerrilla Girls add a cultural context for these women’s uplifting journeys. It is not accolades they seek; it’s simply the radical opportunity to live whole.”

“This educational documentary offers a panoramic view of female leadership, creativity, wisdom, and courage around the world and over thousands of years.

“Women’s Power looks at female spheres of power in politics, economics, religion, medicine, arts, and letters, featuring a rich tapestry of women both famous and anonymous, ancient and modern. These are the bold and creative women you always knew existed, who were kept out of the history books and off the TV screens.”

An award-winning ten-part series that premiered at the Kennedy Center in Washington, DC.

“Joan Mitchell was born in Chicago in 1926 and died in Paris in 1992. After graduating from the School of the Art Institute of Chicago, Joan settled in New York City in 1950. She was an active participant of New York’s dynamic Abstract Expressionist scene and hung out with fellow painters Franz Kline, Willem de Kooning and Philip Guston and, soon, poets Frank O’Hara, James Schuyler and John Ashbery.

“In the mid-fifties, she moved to Paris, France. There she was part of a circle of friends that included Pierre Matisse, Samuel Beckett and Alberto Giacometti. Mitchell is one of the great abstract painters of the 20th century. This elegantly edited documentary weaves interviews with the acerbic Mitchell and other leading painters and critics while letting her stunning pictures dominate the film.”

A History of Women Photographers

“Fifteen minute historical short, with dramatisations, which was installed in four venues with a traveling museum exhibition: >A History of Women Photographers 1839-1974, curated by Naomi Rosenblum.”

Women’s Representation in the Media

“A fast moving programme with visuals of past and present media and interviews with Dr. Maurine Beasley, Sheila Gibbons and Junior Bridge, all foundational scholars in the field of women and media. The programme focuses on four areas: the reclaimed history of women who created media, the media portrayal of women, women’s inclusion in the media workforce and how men perceive media differently than women which affects what we read, see and hear from the media.”

“Among experts, the practice of female genital mutilation (FMG) is widely considered African or Islamic. Cut conclusively proves that FGM can be found as a native practice on all inhabitable continents.

“From war zones in the Middle East to suburban white America, the film visits fifteen countries and features key interviews with FGM survivors, activists, cutters, doctors and researchers to uncover an often secret practice shrouded in centuries of traditions, mysticisms and irrationalities.”

“Like drawing back a curtain to let bright light stream in, Miss Representation uncovers a glaring reality we live with every day but fail to see. Written and directed by Jennifer Siebel Newsom, the film exposes how mainstream media contributes to the under-representation of women in positions of power and influence in America. The film challenges the media’s limited and often disparaging portrayals of women and girls, which make it difficult for women to achieve leadership positions and for the average woman to feel powerful herself.

“In a society where media is the most persuasive force shaping cultural norms, the collective message that our young women and men overwhelmingly receive is that a woman’s value and power lie in her youth, beauty, and sexuality, and not in her capacity as a leader. While women have made great strides in leadership over the past few decades, the United States is still 90th in the world for women in national legislatures, women hold only 3% of clout positions in mainstream media, and 65% of women and girls have disordered eating behaviours.”

“Meet the ‘Chinese Joan of Arc,’ Qiu Jin (1875-1907), a radical women’s rights activist who defied tradition to become the leader of a revolutionary army. Qiu Jin boldly challenged traditional gender roles and demanded equal rights and opportunities for women. She was the first woman to lead an armed uprising against the corrupt Qing Dynasty, for which she was arrested and executed. She became the first female martyr for China’s 1911 Revolution and is celebrated as a national heroine today.

“While Qiu Jin is a familiar figure in China, she is largely unknown outside of the country. Using scholar interviews, archival materials, and dramatic recreation scenes based on her original writings, Autumn Gem brings the story of Qiu Jin to life.”

Episode 18 of How Great Science Fiction Works from The Great Courses.

“One stereotype science fiction still hasn’t fully shaken off is that it is a predominantly male genre. Originally, the audience was assumed to be male because science fiction often featured similar themes of exploration, war, and domination that characterised the Western genre. This idea was so prevalent that female science fiction writers were often only successful when writing under a male pseudonym or gender-ambiguous nom de plume. Look at how far the genre has progressed, with famous authors such as Doris Lessing and Margaret Atwood, and consider how much work remains to be done.”

Religion and Violence Against Women

Episode 9 of Thinking About Religion and Violence from The Great Courses.

“In this lecture, investigate the gendering of religious language and the treatment of women’s bodies in religious practices like menstrual seclusion and self-sacrifice. Also, study the anxiety around women that occurred during the Salem witch trials, as well as competing interpretations of women’s freedom and constraint in Islam.”

Women’s Rights in the Early Revolution

Episode 14 of Living the French Revolution and the Age of Napoleon from The Great Courses.

“Women had no official political role in the Old Regime, but the Revolution raised the question of women’s rights and their place in the public sphere. Find out how two of the era’s key feminists - Condorcet, a male mathematician, and Olympe de Gouges, a female writer - framed the demand for women’s rights, and observe the many ways women engaged in politics.”

The Suffragists: Political Struggles for Women in Mexico

“The story of Eufrosina Cruz, an indigenous woman from the Zapotec community of Santa Maria Quiegolani in the state of Oaxaca, Mexico. The Suffragists details her political struggle, as well as Mexican women’s long fight for political power, beginning with the Revolutionary period. The film also considers challenges that women in power face.”