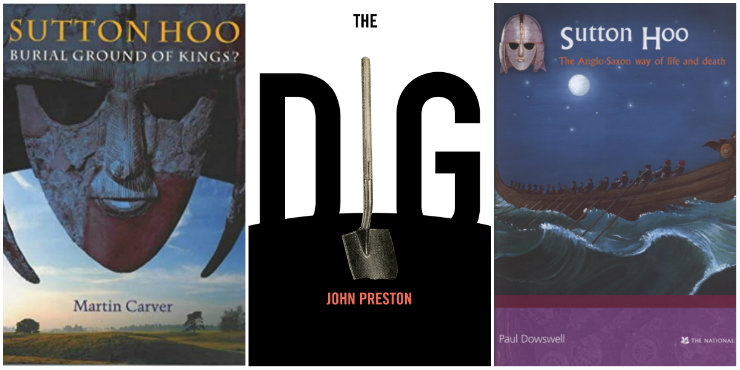 Sutton Hoo, near Woodbridge, is the site of two sixth- and early-seventh-century cemeteries which were discovered in 1939. One cemetery contained an undisturbed ship burial, including a wealth of Anglo-Saxon artefacts of outstanding archaeological significance, most of which can now be seen in the British Museum.

It is generally thought that Raedwald, the ruler of the East Angles, was buried in the ship. Raedwald is still remembered locally in some of our street names.

The archaeological site is in the care of the National Trust. Staff from Sutton Hoo are visiting several Suffolk libraries with their fascinating information and artefacts over the next few months. If you want to know more, why not have a look at some of the many books about this outstanding archaeological site?

You can also find out more from the Seckford Collection at Woodbridge Library.

Aspects of Anglo-Saxon Archaeology: Sutton Hoo and other discoveries, by Rupert Bruce-Mitford

The Age of Sutton Hoo: the seventh century in North-Western Europe, by Martin Carver

Sutton Hoo: the Anglo-Saxon way of life and death, by Paul Dowswell

Sutton Hoo: the excavation of a royal ship-burial by Charles Green

The Reckoning of King Raedwald: the story of the king linked to the Sutton Hoo ship-burial, by Sam Newton

Suffolk in the Middle Ages, by Norman Scarfe

Edith Pretty: from socialite to Sutton Hoo, by Mary Skelcher

The World of Sutton Hoo, by Jenny Webb

Sutton Hoo and its Landscape: the context of monuments, by Tom Williamson

The Dig, by John Preston

“In the long hot summer of 1939 Britain is preparing for war. But on a farm in Suffolk there is excitement of another kind. Mrs Pretty, the widowed farmer, has had her hunch proved correct that the strange mounds on her land hold buried treasure.”

“Brightfire covers important events during and after the reign of King Raedwald of Sutton Hoo, Suffolk, East Anglia, UK, and is set mainly in and around his homestead nearby, with some scenes set in Northumbria and elsewhere. The story is set in the period 608-633 AD, when Christianity is struggling to take hold on the eastern side of Britain.”

Farewell the King: a tale of Sutton Hoo, by Jenny Webb

We also recommend The Last Kingdom, by Bernard Cornwell and The Serpent Sword, by Matthew Harffy to anyone looking for historical fiction based on the Anglo-Saxons.