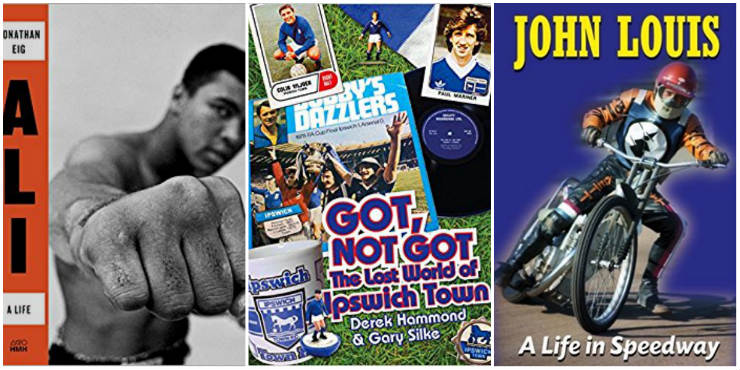 We’ve put together a list of our favourite sport books to coincide with the launch of our new Sporting Memories groups. These new groups encourage over-50s to reminisce about sporting events they’ve enjoyed and enjoy quizzes, games and gentle activities.

Jim Clark to Jackie Stewart: motor racing in the 1960s, by Bryan Apps

A Sporting Life in Pictures, by Helen J. Bate (ed.)

This is a large format book designed for people with Alzheimer’s or other conditions that cause dementia. High quality images and short texts make it ideal for sharing with family and carers.

It will appeal to those with an interest in sport and includes images of football, fishing, rugby and other familiar, and less familiar sporting pastimes.

Lost Voices of Cricket: golden moments with some of the game’s greats, by Ralph Dellor & Stephen Lamb

“Cricket is a game rich in international history, sporting characters and, on occasions, controversy.

“Over his long career as a cricket commentator and journalist, Ralph Dellor has met some of the greatest exponents of the ‘summer’ game. In the 1990s he conducted a series of face-to-face taped interviews with famous cricketers past and present. Nine of these extraordinary interviews have now been captured in the written word.”

Ali: a life, by Jonathan Eig

“The most comprehensive and definitive biography of Muhammad Ali that has ever been published, based on more than 500 interviews with those who knew him best, with many dramatic new discoveries about his life and career.”

The Wrestling, by Simon Garfield

A nostalgia trip through the 1970s when Saturday afternoons were dominated by Kendo Nagasaki, Mick McManus, Big Daddy and Giant Haystacks.

Relive your memories of the 1966 World Cup with this general round-up of the decade.

“What does it mean to be forever defined by one moment, unable to escape the hold it commands over you in other people’s eyes and in your own imagination?

“Fifty years on from England’s World Cup victory, football great Sir Bobby Charlton takes us back to the greatest moment of his life: what he saw, what he heard, how he felt as the lynchpin attacking midfielder in England’s winning team.”

“Football is a national passion that inspires nostalgia and friendships. Fields of dreams, theatres of football, whatever you wish to call them, football grounds are saturated with memories and hopes - and this new revamped, re-illustrated and completely revised edition brings some of these flooding back across the years.”

Immortal: the biography of George Best, by Duncan Hamilton

“But most importantly, Hamilton presents Best at his glorious peak - the precocious goals, the labyrinthine runs, the poise and balletic balance and the body swerves. This is George Best - footballing immortal.”

“This book presents the history of Ipswich Town Football Club, tracing some of the many ways it has changed and developed over time.”

“Thirteen very different Ipswich Town supporters write about their favourite game. From the sublime, when Ipswich beat Bolton in the 2000 play-off semi-finals to a near riot at Millwall in 1978, and including classic games against Norwich and Sheffield United, this book shows how it’s not our greatest victories as a football club that stay in our hearts, but other values, less tangible than silverware: love, family, friendship & sport.”

“Ipswich Town’s league championship success in 1961/62 was one of the greatest shocks in the history of professional football in England. This is the story of that season in a match-by-match account set against the background of the news stories of the day.”

Got, Not Got: the lost world of Ipswich Town, by Derek Hammond & Gary Silke

“This volume is an Aladdin’s cave of memories and memorabilia, guaranteed to whisk you back to Portman Road’s fondly remembered ‘Golden Age’ of mud and magic - as well as a Blues-mad childhood of miniature tabletop games and imaginary, comic-fuelled worlds.

“The book recalls a more innocent era of football, lingering longingly over relics from the good old days - Tractor Boys stickers and petrol freebies, league ladders, big-match programmes and much more - revisiting lost football culture, treasures and pleasures that are 100% Ipswich Town. If you are a lifelong Ipswich fan, one of the army of obsessive soccer kids at any time from the arrival of Bobby Robson to the early days of the Premier League, then this is the book to recall the mavericks - Mariner, Muhren and Mills, Holland, Beattie and Butcher - the the marvels of the lost world of football.”

“This book looks back on the 1978 FA Cup campaign that culminated in Bobby Robson’s team defeating Arsenal 1-0 to become FA Cup winners. All the details of Ipswich’s road to Wembley are featured in this book, including a round-by-round review and full, detailed biographies of every player to have taken part in the campaign.”

Ipswich Town FC: the 1960s from Ramsey to Robson, by Terry Hunt

“This title features hundreds of photographs of Ipswich Town in action during the 1960s. It spans the era from Alf Ramsey’s League Championship triumph in 1961/62 to the beginning of the Bobby Robson years in 1969.”

Got, Not Got: the lost world of Norwich City, by Derek Hammond & Gary Silke

For our customers in the north of the county. Like the Ipswich Town book in the series, this looks back to famous names of the past through bubblegum cards and old magazines and football programmes.

A Life in Speedway, by John Louis

“This is the autobiography of one of British speedway’s all-time greats - a motorcycling legend of Ipswich, where he has been one of the town’s most successful and finest sporting ambassadors for the best part of half a century.”