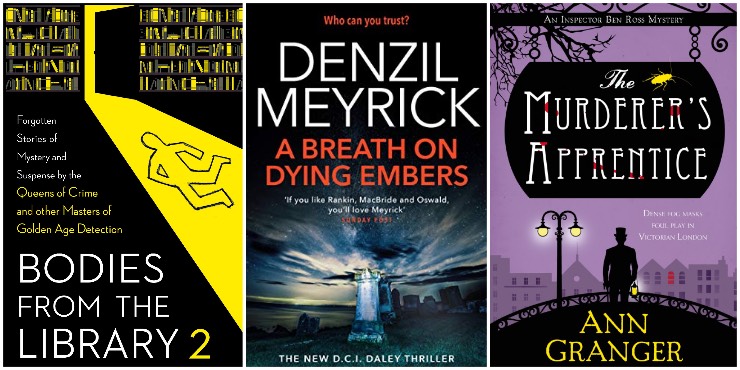 Did you know that Suffolk borrowers’ favourite genres are crime and thriller? Stock librarian Brandon King picks out some great recent titles you won’t want to miss.

“Sigmund Freud deals with an unwelcome visitor; Columbo confronts a murderous bookseller; a Mexican cartel kingpin with a fatal weakness for rare books; deadly secrets deep in the London Library: who knew literature could be so lethal? Here are 15 short stories to die for from the world’s best crime writers.”

“1930. Frances Black is worried - divorce proceedings are under way and her solicitor has learnt of a spiteful letter sent to the court claiming that there is more to her friendship with her sleuthing partner, Tom Dod, than meets the eye. Fran takes Tom’s advice to get away, travelling down to Devon to help the Edgertons with their family mystery.

“After meeting the charismatic Eddie Edgerton and arriving at their residence, Sunnyside House, Fran soon learns that Eddie’s grandfather, Frederick Edgerton, died in mysterious circumstances when his wheelchair went off a cliff. Was it really an accident? And what happened to Frederick’s precious diamond which went missing at the time of his death? As Fran investigates, she uncovers family scandal, skulduggery and revenge, but can she solve the mystery of the missing diamond?”

“April, 1555. A priest has been stabbed to death in the village of St Botolph, to the east of the City of London, his body left to rot by the roadside - and Jack Blackjack stands accused of his murder.

“As well as clearing his name, Jack has his own reasons for wanting to find out who really killed the priest - but this is an investigation where nothing is as it seems. Was it a random attack by a desperate outlaw, or do the answers lie in the murdered priest’s past?

“As he questions those who knew the dead man, Jack is faced with a number of conflicting accounts - and it’s clear that not everyone can be telling him the whole truth. But Jack is about to be side-tracked from the investigation - with disastrous consequences.”

“When 11 year old Evan vanishes without trace, his parents are plunged into their worst nightmare - especially as the police, under massive pressure, have no answers. But months later Evan is unexpectedly found, frightened and refusing to speak. His loving family realise life will never be the same again.

“DI Naylor knows that unless those who took Evan are caught, other children are in danger. And with Evan silent, she must race against time to find those responsible.”

“A lonely widow. An angry young woman. A man on the run from his demons. And someone wants them dead.”

Lady in the Lake, by Laura Lippman

“Cleo Sherwood disappeared eight months ago. Aside from her parents and the two sons she left behind, no one seems to have noticed. It isn’t hard to understand why: it’s 1964 and neither the police, the public nor the papers care much when Negro women go missing.

“Maddie Schwartz - recently separated from her husband, working her first job as an assistant at the Baltimore Sun - wants one thing: a byline. When she hears about an unidentified body that’s been pulled out of the fountain in Druid Hill Park, Maddie thinks she is about to uncover a story that will finally get her name in print.”

Nothing to Hide, by James Oswald

“Coming home to her London flat, Constance stumbles across a young man, bloodied, mutilated, and barely alive. She calls it in and is quickly thrown into the middle of a nationwide investigation. It seems that the victim is just the latest in a string of similar ritualistic attacks.

“No matter that she is off-duty, no matter that there are those in the Met who would gladly see the back of her, Con can’t shake her innate determination to bring the monsters responsible for this brutality to justice.”

The Dance of Death, by Oliver Bottini & Jamie Bulloch (trans.)

“One wet and misty weekend in October, the Niemann family find a stranger in their garden. He is armed and tries to force his way into the house, but disappears as soon as the police are alerted. That night he’s back with an impossible ultimatum.

“Freiburg detective Louise Boni and her colleagues are put under enormous pressure. Traces of evidence lead her to a no-man’s-land, and to a ruthless criminal who brings with him the trauma of conflict in the Balkans.”

“1311. It is four years since the death of King Edward I, but his reign of terror has cast long shadows over the kingdom. At Holyrood Abbey, sheltered in the depths of the Welsh march, the old king’s former bodyguards protect his secret relics and watch over a mysterious prisoner who is kept in the abbey’s dungeon. But their peaceful existence is shattered when Abbot Henry is poisoned.

“Summoned to Holyrood, Sir Hugh Corbett, Keeper of the Secret Seal, finds the fortress in chaos. Brothers Anselm and Richard have been brutally slain by nails driven deep into their skulls.”

The Murderer’s Apprentice, by Ann Granger

“It is March 1870. London is in the grip of fog and ice. But Scotland Yard’s Inspector Ben Ross has more than the weather to worry about when the body of a young woman is found in a dustbin at the back of a Piccadilly restaurant.

“Ben must establish who the victim is before he can find out how and why she came to be there. His enquiries lead him first to a bootmaker in Salisbury and then to a landowner in Yorkshire.

“Meanwhile, Ben’s wife, Lizzie, aided by their eagle-eyed maid, Bessie, is investigating the mystery of a girl who is apparently being kept a prisoner in her own home. As Ben pursues an increasingly complex case, Lizzie reveals a vital piece of evidence that brings him one step closer to solving the crime.”

The Bear Pit, by Shona MacLean

“London, 1656: Captain Seeker is back in the city, on the trail of an assassin preparing to strike at the heart of Oliver Cromwell’s Republic. The Commonwealth is balanced on a knife edge. Royalists and disillusioned former Parliamentarians have united against Oliver Cromwell, now a king in all but name. Three conspirators, representing these factions, plan to assassinate the Lord Protector, paving the way back to the throne for Charles Stuart once and for all.

“Captain Damian Seeker, meanwhile, is preoccupied by the horrifying discovery in an illegal gambling den of the body of a man ravaged by what is unmistakably a bear. Yet the bears used for baiting were all shot when the sport was banned by Cromwell. So where did this fearsome creature come from, and why would someone use it for murder?”

Bodies from the Library 2: forgotten stories of mystery and suspense by the queens of crime and other masters of golden age detection, by Tony Medawar (ed.)

“This anthology of rare stories of crime and suspense brings together 15 tales from the Golden Age of Detective Fiction for the first time in book form, including a newly discovered ‘Gervase Fen’ novella by Edmund Crispin that has never previously been published.”

A Breath on Dying Embers, by Denzil Meyrick

“When the luxury cruiser, hastily renamed Great Britain, berths in Kinloch harbour, the pressure is on DCI Jim Daley. The UK Government are taking a high-powered group of businessmen and women on a tour of the British isles, golfing and seeing the sights, as part of a push for global trade. But when one of the crew goes missing , and an elderly local ornithologist disappears, will the pressure become too great?

“The arrival of a face from the past, sends Daley’s world into a tailspin. And the lives of the passengers and crew of SS Great Britain, as well as the country’s economic future are in jeopardy. DS Brian Scott comes to the fore, and replete with a temporary promotion, is once more - most reluctantly, in his case - back at sea. Daley faces a life and death struggle, but is this his last throw of the dice?”

Death in a Desert Land, by Andrew Wilson

“In Baghdad, 1928 - Agatha Christie sets off on a mission, determined to investigate the unresolved mystery of the explorer and writer, Gertrude Bell. Believed to have taken her own life, an unearthed letter now reveals that Gertrude was afraid someone was out to kill her.

“As Agatha begins to look into the untimely death of Gertrude Bell, she soon is put to the test against a killer who is determined to stay hidden beneath the desert sands.”

“The Garths had farmed their fertile acres for generations and fine land it was with the towering hills of the Lake Country on the far horizon. Garthmere Hall itself was old before Flodden Field, and here hot-tempered Robert Garth, still hale and hearty at eighty-two, ruled his household with a rod of iron.

“The peaceful dales and fells of the north country provide the setting for this grim story of a murder, a setting in fact which is one of the attractive features of an unusual and distinctive tale of evil passions and murderous hate in a small rural community.”