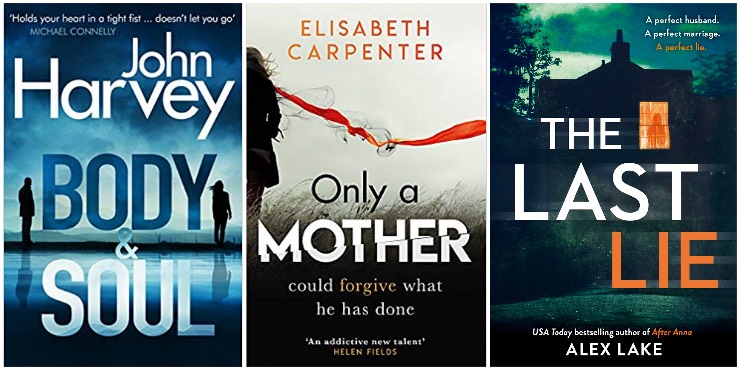 Did you know that Suffolk borrowers’ favourite genres are crime and thriller? Stock librarian Brandon King picks out some great recent titles you won’t want to miss.

The House on Half Moon Street, by Alex Reeve

“Leo Stanhope. Avid chess player; assistant to a London coroner; in love with Maria; and hiding a very big secret. For Leo was born Charlotte, the daughter of a respectable reverend. But knowing he was meant to be a man - despite the evidence of his body - and unable to cope with living a lie any longer, he fled his family home at just 15 and has been living as Leo: his secret known to only a few trusted people.

“But then Maria is found dead and Leo is accused of her murder. Desperate to find her killer and under suspicion from all those around him, he stands to lose not just the woman he loves, but his freedom and, ultimately, his life.”

Only a Mother, by Elisabeth Carpenter

“Erica Wright lives a quiet, lonely life in her two-bed end of terrace. Her front door hasn’t been graffitied in more than a year but that’s soon about to change - her son, Craig, is being released from prison.

“Local journalist Luke Harding is determined to warn the public. As the person who covered the arrest and trial all those years ago, he knows the kind of predator Craig really is.

“Luke’s worst fears are realised after a girl goes missing days after Craig’s release and he becomes obsessed with trying to prove that Craig was behind it. Erica is worried too - but how can a mother turn her back on her son? And how far will she go to protect him?”

The Missing Pieces of Sophie McCarthy, by B. M. Carroll

“The day Sophie McCarthy met Aidan Ryan changed everything for her. One tragic, violent act left her hospitalised, hanging by a thread.

“One year on, Aidan is determined to fix the mess he made of Sophie’s life. Even if it means rebuilding his own around her.

“Sophie is trying to start living again. But being a victim doesn’t make you a saint. And Aidan soon starts to realise that the woman he is trying to save might not be as helpless as she seems.”

This one comes with a recommendation from Ian Rankin.

“When his estranged daughter Katherine suddenly appears on his doorstep, Elder knows that something is badly wrong. The breakdown of her relationship with a controversial artist has sent her into a self-destructive tailspin which culminates in murder. And as Elder struggles to protect Katherine and prove her innocence, the terrors of the past threaten them both once more.”

“Wealthy Marcia Tredgold and her daughter, Charlotte, want Bea Abbot to find them replacements for staff who have left under a cloud. Bea discovers that all those dismissed were close to Marcia Tredgold, and senses that something is not right. Were they framed, and if so by whom - and why? Even more curiously, when Marcia Tredgold gets Bea alone, she asks her to find out who killed her two cats.

“Bea resists becoming involved in the strange goings-on at the Tredgold mansion, until a shocking event leads her to worry about Marcia’s safety. Could the cats’ deaths be linked to other disturbing events? And whose account can be trusted in the web of secrets and lies which has been spun around the family? In her quest to uncover the truth, Bea’s own safety is put at risk.”

You, by Caroline Kepnes

The novel behind the Netflix series.

“When Beck strides into the bookstore where Joe works, he’s instantly smitten. Beck is everything Joe has ever wanted: she’s gorgeous, tough, razor-smart. Joe needs to know everything about her, to have her only for himself. And he’ll stop at nothing to do so.”

The Last Lie, by Alex Lake

“For Claire Daniels, life is good. She has everything she’s ever wanted - a career she loves, friends she can rely on and a husband who dotes on her. All she needs is to start a family of her own and things will be even better than good. They’ll be perfect.

“For Alfie, it couldn’t be more different. His life with Claire is built on a lie. A lot of lies. And she can never find out. Because Alfie has plans for her. Plans which must never come to light.

“But lies have a way of taking on a life of their own, and when his do, the consequences threaten to destroy everything. For him and Claire.”

“When Joe Christie’s fishing boat is swept onto Tentsmuir beach during a fierce storm, a man’s mutilated body is found in the hold. DCI Andy Gilchrist of St Andrews CID is called in to investigate. But his murder investigation deepens when he learns that Joe Christie and his boat have been missing for three years.

“The police pathologist, Dr Rebecca Cooper, retrieves a five pound note from the dead man’s throat. Is this the killer’s calling card? And whatever happened to Joe Christie?”

Verses for the Dead, by Douglas J. Preston & Lincoln Child

“After an overhaul of leadership at the FBI’s New York field office, Special Agent A.X.L. Pendergast is forced to accept an unthinkable condition of continued employment: the unorthodox lone wolf must now work with a partner.

“Pendergast and his new cohort, Special Agent Coldmoon, are dispatched to Florida to investigate a rash of ritualistic murders. A killer is carving out the hearts of his victims, and depositing the stolen organs alongside the headstones of existing graves. Accompanying each heart is a cryptic letter, signed by a ‘Mr Brokenhearts’. There is one more intriguing aspect to Mr Brokenhearts’ macabre modus operandi: the chosen graves all belong to women who have committed suicide.

“As he searches for the connection between the old suicides and the new murders, Pendergast realises the brutal new crimes may be just the tip of the iceberg: that he faces a conspiracy of death reaching back decades.”