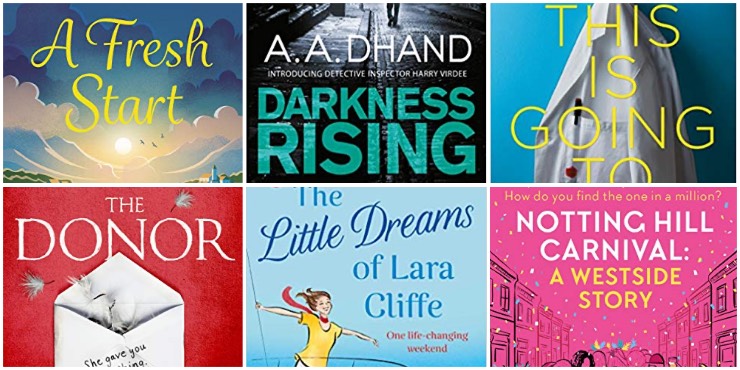 With one in six adults still struggling to read, Quick Reads continues its work to break down the barriers to reading. Since its launch in 2006, Quick Reads has distributed over 4.8m copies of more than 100 titles.

Each year, Quick Reads publishes six short, plot-filled books written by well-known authors. They are designed to help people who have lost the reading habit or struggle with aspects of reading. Whether you’re looking for an entertaining gateway to reading or already like these authors and want to read more from them, we encourage you to borrow them.

“From wronged wives to nosy neighbours, from distant dads to new-found family, from secrets to lies, fresh starts to false endings - and everything in between - this is a collection of brilliant short stories from the best writers around.”

Notting Hill Carnival: a West Side story, by Candice Carty-Williams

“Sapphire is the hot-headed leader of the Red Roses in an area where gang loyalty is all that matters. When she meets a boy called Apollo on her way to Notting Hill Carnival, she forms an instant bond with him. She thinks he could be the one. Until she discovers he’s a member of rival gang, the Gold Teeth.”

Darkness Rising, by A. A. Dhand

“Detective Inspector Harry Virdee has a lot on his plate. His team is facing government cuts, tensions are building between Bradford’s two rival drugs gangs and his wife Saima is due to give birth any day now. So when bodies start turning up in the old industrial district, the pressure is on to get the case wrapped up as quickly as possible, or risk a full-scale gang war.

“But the man behind the murders is ruthless and pushy. And things are getting personal. Harry must think fast and bend the rules if he wants to keep his city, and his family, safe.”

The Little Dreams of Lara Cliffe, by Milly Johnson

“Lara Cliffe and her three friends are off on a mini-break for her hen party. However, on the overnight ferry, Lara finds out that Danny, her ex - the one who jilted her three weeks before their wedding - is playing in the onboard band, and he spots her in the crowd. Will she meet him the next night to talk?”

The Donor, by Clare Mackintosh

“She gave you everything. But what does she want in return?

“When Lizzie’s daughter Meg is given a life-saving heart transplant, Lizzie feels hugely grateful to the nameless donor. Then she receives a letter from the donor’s mother, Karen, asking to meet, and it seems like the least she can do.

“But as soon as Karen is welcomed into their lives, Lizzie feels something isn’t right. And before long, she can’t help but worry that by inviting Karen in, she might have put Meg in danger.”

This is Going to Hurt, by Adam Kay

“This is a specially adapted version of Adam Kay’s bestseller This is Going to Hurt for Quick Reads.

“Welcome to the life of a junior doctor. You work 97 hours a week. You make life and death decisions. You are often covered in blood (or worse) from head to toe. And the hospital parking meter earns more money than you do.

“Adam Kay’s diary was written in secret after long days, sleepless nights and missed weekends. It is funny, moving and sometimes shocking. This is everything you wanted to know - and more than a few things you didn’t - about life on and off the hospital ward.”