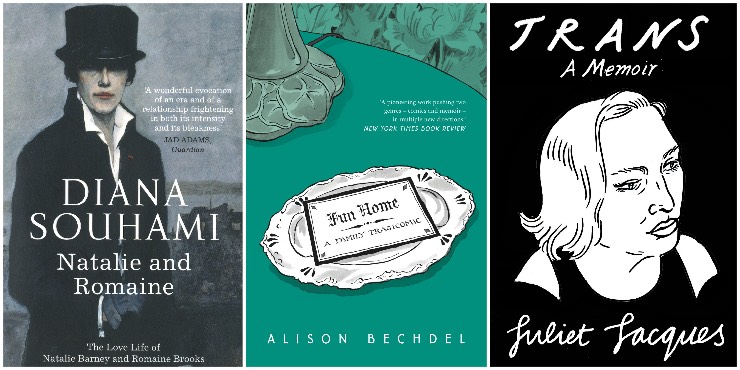 June is Pride Month. Why not mark the occasion with some of our finest LGBT life writing?

Natalie and Romaine, by Diana Souhami

“Natalie Barney and Romaine Brooks were both rich, American and grandly lesbian. They met in Paris in 1915 and their tempestuous affair lasted more than fifty years. By the end of their lives together, Natalie and Romaine had entertained, slept with, fallen in love with, tutored or tortured a range of figures including Gertrude Stein, Colette, and Edith Sitwell.”

I Left My Husband for the Au Pair, by Michele Macfarlane

“This is a tantalizing true story of a British wife and mother-of-three, whose life is turned upside down when she meets and falls in love with her pretty and much younger au pair.”

Why Be Happy When You Could Be Normal?, by Jeanette Winterson

“When Jeanette Winterson, author of Oranges Are Not the Only Fruit, left home at 16 because she was in love with a woman, Mrs. Winterson asked her: “Why be happy when you could be normal?

“This book is the story of a life’s work to find happiness. It is the story of how the painful past returned to haunt Jeanette’s later life, and send her on a journey into madness and out again, in search of her real mother. It is also a book about other people’s stories, showing how fiction and poetry can form a string of guiding lights, a life raft which supports us when we are sinking.”

“This novel begins with a painting won in a raffle: 15 sunflowers, hung on the wall by a woman who believes that men and boys are capable of beautiful things. And then there are two boys, Ellis and Michael, who are inseparable. And the boys become men, and then Annie walks into their lives, and it changes nothing and everything.”

“This is a candid biography charting the dramatic rise and tragic fall of Justin Fashanu, Britain’s first black £1 million footballer and the first professional footballer to come out as gay.”

The Glass Closet: why coming out is good business, by John Browne

“Whether you’re lesbian, gay, transgender or straight, John Browne’s message is simple and clear: it’s better for you and it’s better for business when you bring your authentic self to work.

“Drawing on his personal experiences and the experience of other gay and lesbian business leaders - including David Geffen, Ivan Massow, Ellen DeGeneres, and Peter Thiel - and by investigating the research and the social contexts, The Glass Closet strives to give courage and inspire the LGBT community that despite the risks involved, self-disclosure is best for employees and for the businesses that support them.”

Out in the Army: my life as a gay soldier, by James Wharton

“Out in the Army looks at the amazing career journey of James Wharton as he becomes a man, enlists in the Army, joins the elite Blues and Royals and learns to deal with his sexuality in a sometimes hostile environment, prior to coming to terms with it and, in turn, helping the army itself come to terms with homosexuality.”

The Oldest Gay in the Village, by George Montague

“Born in 1923, George Montague has seen many changes in his lifetime, few greater than the attitude towards being gay - attitudes that saw him criminalised for the sin of loving another man. This charming, funny book is a unique social history from a truly remarkable man.”

“The autobiography of former Welsh rugby player Gareth Thomas, who represented Wales in both rugby union and rugby league. Thomas announced publicly he was gay in 2009, making him the first openly gay professional rugby union player.”

Charlotte Mew and her Friends, by Penelope Fitzgerald

“Charlotte Mew was a poet with a formidable reputation. Outwardly, she also was a dutiful daughter living at home with an ogre of a mother. However, proprieties had to be observed and no one could know that they had no money, that two siblings were insane and that Charlotte was a lesbian.”

Moab is my Washpot, by Stephen Fry

“Most people are familiar with Stephen’s talents as a writer and actor. What few people know is the private Fry, the man behind the public face. His autobiography is incredibly frank - and frankly incredible.”

Trans: a memoir, by Juliet Jacques

“In July 2012, Juliet Jacques underwent sex reassignment surgery and felt for the first time that her body matched the person she felt she had been since childhood. Through university and then in a series of dead-end clerical jobs, Jacques felt out of place with her surroundings, and with who she really was. Living in Brighton, trying to launch a career as a writer, she navigates the hostilities and misunderstandings of growing up in a time where the mainstream media fail to acknowledge transgender identity. Yet through films, music, politics and football she begins to find herself, and starts the process of transition.

“Through her memoir, Jacques interweaves the narrative with powerful explorations of many of the major debates surrounding trans: the uses of life writing, the relationship with feminism, and the ‘before and after’ images that illustrated so many articles and documentaries.”

“Meet Alison’s father, obsessive restorer of the family’s Victorian home, funeral director, high school English teacher, icily distant parent, and a closeted homosexual, who, as it turns out is involved with his male students and the family babysitter.”