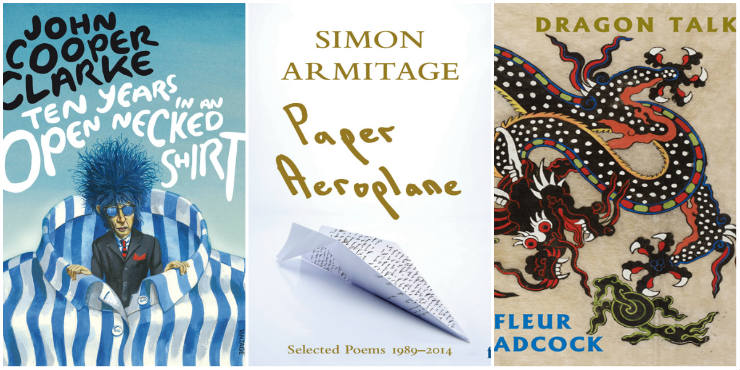 Are you in the mood for some verse? We’ve put together a list of some of our favourite poetry books on our OverDrive service.

Inside the Wave, by Helen Dunmore

“To be alive is to be inside the wave, always travelling until it breaks and is gone. These poems are concerned with the borderline between the living and the dead – the underworld and the human living world – and the exquisitely intense being of both. They possess a spare, eloquent lyricism as they explore the bliss and anguish of the voyage.”

Tenth and final book of poetry from the late writer and winner of the 2017 Costa Poetry Award.

The Poetry Pharmacy by William Sieghart

“Sometimes only a poem will do. These poetic prescriptions and wise words of advice offer comfort, delight and inspiration for all; a space for reflection, and a chance to realise - I’m not the only one who feels like this.

“In the years since he first had the idea of prescribing short, powerful poems for all manner of spiritual ailments, William Sieghart has taken his Poetry Pharmacy around the length and breadth of Britain, into the pages of The Guardian, onto BBC Radio 4 and onto the television, honing his prescriptions all the time. This book presents the most essential poems in his dispensary: those which, again and again, have really shown themselves to work. Whether you are suffering from loneliness, lack of courage, heartbreak, hopelessness, or even from an excess of ego, there is something here to ease your pain.”

Milk and Honey, by Rupi Kaur

“The book is divided into four chapters, and each chapter serves a different purpose. Deals with a different pain. Heals a different heartache. Milk and Honey takes readers through a journey of the most bitter moments in life and finds sweetness in them because there is sweetness everywhere if you are just willing to look.”

“Simon Armitage’s is one of the nation’s most original, most respected and best-loved poets. Paper Aeroplane: selected poems 1989-2014 is the author’s own selection from across a quarter-century of work, from his debut to the latest, uncollected work. Drawing upon all of his award-winning poetry collections, this generous selection provides an essential gathering of this most thrilling of poets”

The Princes Saves Herself in this One, by Amanda Lovelace

“From Amanda Lovelace, a poetry collection in four parts: the princess, the damsel, the queen, and you. The first three sections piece together the life of the author while the final section serves as a note to the reader. This moving book explores love, loss, grief, healing, empowerment, and inspiration.”

“Hollie McNish, winner of the Ted Hughes Award for Poetry, has thrilled and entranced audiences the length and breadth of the UK with her compelling and powerful performances. Plum, her debut, is a wise, sometimes rude and piercingly candid account of her memories from childhood to attempted adulthood. This is a book about growing up, about flesh, fruit, friendships, work and play – and the urgent need to find a voice for the poems that will somehow do the whole glorious riot of it justice.

“Emily Elizabeth Dickinson (December 10, 1830 – May 15, 1886) was an American poet. Born in Amherst, Massachusetts, to a successful family with strong community ties, she lived a mostly introverted and reclusive life. After she studied at the Amherst Academy for seven years in her youth, she spent a short time at Mount Holyoke Female Seminary before returning to her family’s house in Amherst.

“Thought of as an eccentric by the locals, she became known for her penchant for white clothing and her reluctance to greet guests or, later in life, even leave her room. Most of her friendships were therefore carried out by correspondence.”

“Punk. Poet. Pioneer. The Bard of Salford’s seminal collection is as scabrous, wry & vivid now as it was when first published over 25 years ago.”

The Gypsy and the Poet by David Morley

“Beginning with the real-life encounter between the poet John Clare and a Gypsy named Wisdom Smith, David Morley reinvigorates the sonnet sequence to stage the fellowship that develops between the two men. We see the Gypsy and the poet banter, argue and teach each other lessons; work, love, and lose what they have loved. The central section of the book enacts Clare’s own belief in the creative forms of nature itself: ‘I found the poems in the fields / And only wrote them down’.”

“After the appearance of Fleur Adcock’s Poems 1960-2000 she wrote no more poems for several years. This cessation coincided with - but was not entirely caused by - her giving up smoking. When poetry returned to her in 2003 it tended towards a sparer, more concentrated style.

”” This new collection continues to reflect her preoccupations with family matters and with her ambivalent feelings about her native New Zealand. Her initial inspiration was the letters her father wrote home from England to his parents during World War II, which evoked her own memories of that era. The central sequence moves from her first coming to consciousness in New Zealand up to and through the war years in Britain and on to sketches from her teens in puritanical postwar Wellington after her reluctant return -not without her usual sardonic eye for incongruities and absurdities. There are also affectionate poems for her grandchildren and her late mother.”