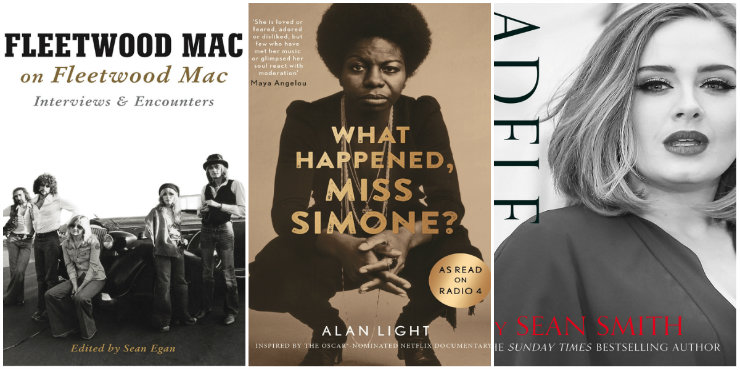 Want to find out more about your favourite singer or band? Our OverDrive eBook service has music-related books for every taste.

Broken Music: a memoir, by Sting

“Having been a songwriter most of my life, condensing my ideas and emotions into short rhyming couplets and setting them to music, I had never really considered writing a book. But upon arriving at the reflective age of fifty, I found myself drawn, for the first time, to write long passages that were as stimulating and intriguing to me as any songwriting I had ever done.

“And so Broken Music began to take shape. It is a book about the early part of my life, from childhood through adolescence, right up to the eve of my success with the Police. It is a story very few people know.

“I had no interest in writing a traditional autobiographical recitation of everything that’s ever happened to me. Instead I found myself drawn to exploring specific moments, certain people and relationships, and particular events which still resonate powerfully for me as I try to understand the child I was, and the man I became.”

“Leonard Cohen’s legacy is that of one of the most literate, daring, and affecting poet-songwriters in the world. Stranger Music presents a magnificent cross-section of Cohen’s work - including the legendary songs Suzanne, Joan of Arc and The Chelsea Hotel, and elections from such books as Flowers for Hitler, Beautiful Losers, and Death of a Lady’s Man, and eleven previously unpublished poems.

“Stranger Music brings together Cohen’s song lyrics and a generous selection of his poetry and is a celebration of the legendary musician’s extraordinary gift for language that speaks with rare clarity, passion and timelessness.”

“Fame, Fortune and Monsters is a quick-read biography of Lady Gaga, one of today’s most famous and outlandish celebrities. The book takes us through the history of Gaga, from her school years right up to today. In addition to a general history of this world-famous music star, the author also discusses her wilder - and stranger - side, including bizarre rumours and fascinating news reports.”

“Ethereal Californian Stevie Nicks, the tormented rocker Lindsey Buckingham, the English rose Christine McVie, the blunt John McVie and loquacious Mick Fleetwood worked through turmoil, heartbreak and betrayal to craft their masterpiece, 1977’s Rumours. All have been astoundingly candid about the process and this collection of interviews, spanning the entirety of Fleetwood Mac’s career, features articles from such celebrated publications as Crawdaddy, New Musical Express, Circus, Creem, Mojo and Classic Rock, as well as interviews that have never previously appeared in print.

“Learn the Fleetwood Mac story directly from the mouths of its members and experience the cauldron of animosity and misplaced love that crafted musical history.”

“Moonwalk is the only book about his life that Michael Jackson ever wrote. It chronicles his humble beginnings in the Midwest, his early days with the Jackson 5, and his unprecedented solo success.

“Giving absolutely unrivalled insight into the King of Pop’s life, it details his songwriting process for hits like Beat It, Rock With You, Billie Jean, and We Are the World; describes how he developed his signature dance style, including the Moonwalk; and opens the door to his very private personal relationships with his family, including sister Janet, and stars like Diana Ross, Berry Gordy, Marlon Brando, Quincy Jones, Paul McCartney, and Brooke Shields.

“At the time of its original publication in 1988, Moonwalk broke the fiercely guarded barrier of silence that surrounded Michael Jackson.”

“Drawing on glimpses into previously unseen diaries, rare interviews and childhood journals, and with the aid of her daughter, What Happened, Miss Simone? tells the story of the classically trained pianist who became a soul legend, a committed civil rights activist and one of the most influential, provocative and least understood artists of our time. This is the story of the real Miss Simone.”

“In Adele, bestselling biographer Sean Smith talks to those close to her as he follows her astonishing journey to fame that began on the gritty streets of Tottenham.

“Through compelling new research and interviews, he reveals that there is far more to Adele than the superstar we all think we know. He uncovers the story of her complex family relationships; the ill-starred love affair between her mother and father; her devastation at the untimely death of her grandfather; and her seemingly unpromising future in a gang-ravaged area of South London. She found salvation at the BRIT School before a series of unhappy love affairs provided the inspiration for her record-breaking albums. He describes how she conquered America and how it all could have been ended by a dramatic vocal injury. Instead, she has made an amazing comeback and found personal happiness in a new relationship and becoming a mum.

“Intimate and revealing, Adele is the uplifting story of the woman with the most glorious voice in the world.”

The Beatles: the stories behind the songs 1967-70, by Steve Turner

“Where is Penny Lane? What was the inspiration for Lucy In The Sky With Diamonds? Steve Turner shatters many well-worn myths and adds a new dimension to the Fab Four’s rich legacy by investigating the events immortalised in The Beatles’ music and now occupying a special niche in popular culture’s collective imagination.”

Good Vibration: my life as a Beach Boy, by Mike Love

“Mike Love is a founding member, lyricist and vocalist of The Beach Boys, considered to be the most popular American band in history, with 13 Gold Albums, 55 top-100 singles, and four #1 hits. Love has been the lead singer of the group one of its principal lyricists since its inception in 1961.

“In Good Vibrations, Mike Love tells the unique story of his legendary, chaotic, and ultimately triumphant five-decade tenure as the front man of The Beach Boys, from their Californian roots to international fame.”