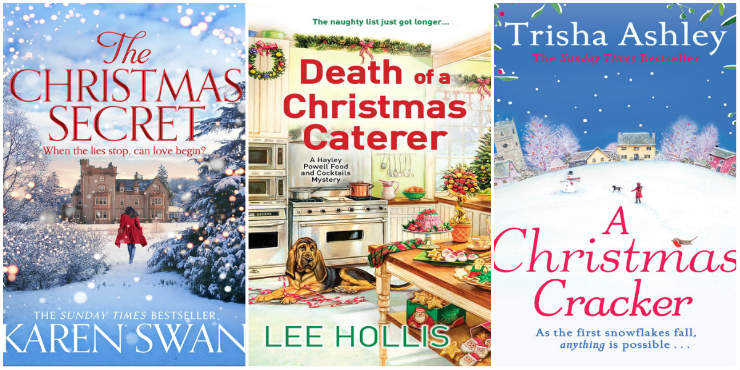 Kiss Me at Christmas, by Susan Mallery

Marry Me at Christmas: To bridal boutique owner Madeline Krug, organising a Christmas wedding is fun – until she finds out she’ll be working closely with the gorgeous brother of the bride, movie star Jonny Blaze. How will a small-town girl avoid falling for the world’s sexiest guy over candlelit dinners and strolls through the snow? Especially with mistletoe hanging everywhere!

“A Kiss in the Snow: Cupcake cook Nancee is stunned when search-and-rescue pilot Jesse strides into her kitchen. Once he’d loved her, but the last time she saw him was the night before he left her at the altar! Now he claims he’s back for good and Christmas tempts her to believe him…”

Christmas at the Cat Café, by Melissa Daley

“The Costwolds town of Stourton-on-the-Hill has its very own cat café. Resident cat Molly and her kittens live here in feline paradise, while owner Debbie serves the locals home-made goodies. But even in the most idyllic surroundings, things don’t always go to plan…

“When Debbie’s heartbroken sister Linda arrives at the cafe, Debbie insists she move in. But Linda is not alone, and the cats are devastated with the arrival of Linda’s dog, Beau. Sadly, Beau’s arrival is not the only bombshell - now Molly’s home is also under threat when a rival cat moves in on her turf.

“With Christmas approaching, Molly is unsettled, barely roused by the promise of tinsel to play with. Fearing for her feline family, she hopelessly stares out of the cafe window searching for an answer. Only a Christmas miracle could bring everyone together…”

“As winter comes to her sleepy Greek island, former hot shot city girl Pippa Pattinson loves her new life of rustic simplicity, running a quaint teashop with her hot fiancé, Niko. But it’s been a quick change to slow living – and you can’t blame a girl for wondering as Christmas approaches, ‘how did I get here?’

“As her Christmas wedding approaches, a trip back to snowy England for her ex’s engagement party makes her wonder if those are wedding bells she’s hearing in her mind, or warning bells. She longs for the excitement of her old London life – the glamour, the regular pedicures. Can she really give that all up to be… a fishwife?

“There’s nothing for it but to throw herself into bringing a little Christmas magic to the struggling village in the form of a Christmas fair. Somewhere in amidst the sparkly bauble cakes and stollen scones, she’s hoping she’ll come to the right decision about where she belongs… fingers crossed, in time for the wedding…”

A Christmas Cracker, by Trisha Ashley

“Things can’t possibly get worse for Tabby. Framed for a crime she didn’t commit, she suddenly finds herself without a job. Then to make matters worse, Tabby’s boyfriend dumps her and gives her cat away to a shelter.

“Rescue comes in the form of kindly Mercy. A master of saving waifs and strays, Mercy wants Tabby to breathe new flair into her ailing cracker business. Together, they’ll save Marwood’s Magical Christmas Crackers. But someone has other ideas. Mercy’s nephew Randal thinks Tabby’s a fraudster. Stubborn, difficult and very attractive, her future depends upon winning him round.

“But it’s that time of the year when miracles really can happen. Standing under the mistletoe, Tabby’s Christmas is set to be one that she will never forget…”

The Christmas Secret, by Karen Swan

“Alex Hyde is the leaders’ leader. An executive coach par excellence, she’s the person the Great and the Good turn to when the pressure gets too much; she can change the way they think, how they operate, she can turn around the very fortunes of their companies.

“Her waiting list is months long, but even she can’t turn down the unorthodox but highly lucrative crisis call that comes her way a few weeks before Christmas, regarding the troublesome – and troubled – head of an esteemed whisky company in Scotland: Lochlan Farquhar, CEO of Kentallen Distilleries, is a maverick, an enigma and a renegade, and Alex needs to get inside his head before he brings the company to its knees.

“It should be business as usual. She can do this in her sleep. Only, when she gets to the remote island of Islay, with the winter snows falling, Alex finds herself out of her comfort zone. For once, she’s not in control - Lochlan, though darkly charismatic, is unpredictable and destructive, her usual methods gaining no traction with him - and with Christmas and her deadline fast approaching, she must win his trust and find a way to close on this deal.

“But as she pulls ever closer to him, boundaries become blurred, loyalties loosen and Alex finds herself faced with an impossible choice as she realises nothing and no-one is as they first seemed.”

Christmas Gifts at the Beach Café, by Lucy Diamond

“With her Cornish Beach Café closed for the winter, Evie Flynn should be looking forward to lazy days and a happy Christmas, with nothing more pressing to think about than when to have her next mince pie.

“But her sister Ruth is coming to stay, in a cloud of heartbreak and bitterness following her marriage breakdown, along with her three unhappy children, and Evie knows she’ll have her work cut out trying to spread some festive cheer. Then her boyfriend Ed breaks the news that he’s going to spend Christmas in London for family reasons and her heart sinks even further.

“Add in to the mix a lost dog plus the hotly contested village Christmas bake-off and before long, Evie is feeling the strain. But there are still a few surprises in store for her that look set to make this Beach Café Christmas the most memorable one yet…”

What a Lady Needs for Christmas, by Grace Burrowes

“To escape a scandal, Lady Joan Flynn flees her family’s estate in the Scottish Highlands. She needs a husband by Christmas, or the holidays will ring in nothing but ruin.

“As Christmas —and trouble — draw nearer, Dante and Joan’s marriage of convenience blossoms into unexpected intimacy, for true love often hides beneath the most unassuming holiday wrapping…”

Death of a Christmas Caterer, by Lee Hollis

“Office Christmas parties can sometimes mean career suicide - but they rarely lead to murder. Hayley thought Garth Rawlings would be the perfect caterer for this year’s bash, but when the gourmet sees her budget, he goes galloping.

“Unfortunately, his run is short-lived. Garth is found dead on the floor of his kitchen, with his delectable creations burning in the oven. Faced with a spread of suspects, Hayley is determined to discover who would want to take out the Christmas caterer, because - no matter what the season - justice must be served…”