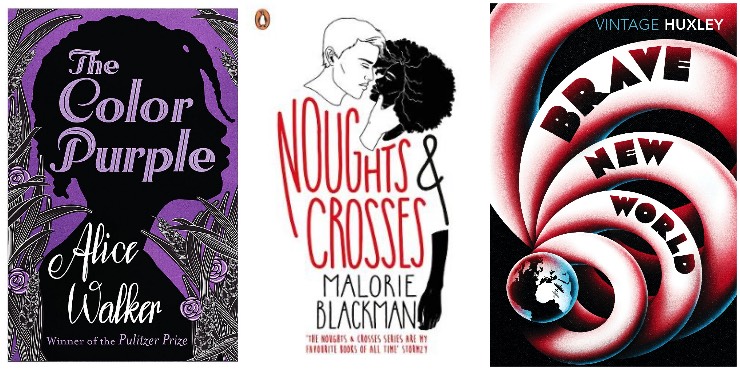 As part of Novels That Shaped Our World, the BBC’s year-long celebration of literature, a panel of writers, curators and critics have selected 100 books that have had an impact on their lives, split into ten monthly themes. May’s theme is Politics, Power & Protest.

“A Thousand Splendid Suns is a chronicle of Afghan history, and a deeply moving story of family, friendship, and the salvation to be found in love.”

“The World Controllers have created the ideal society. Genetic science has brought the human race to perfection. From the Alpha-Plus mandarin class to the Epsilon Semi-Morons, man is bred and educated to be content with his pre-destined role.”

Lord of the Flies, by William Golding

“A plane crashes on a desert island and the only survivors, a group of schoolboys, assemble on the beach and wait to be rescued. By day they inhabit a land of bright fantastic birds and dark blue seas, but at night their dreams are haunted by the image of a terrifying beast.”

“Sephy is a Cross - a member of the dark-skinned ruling class. Callum is a Nought - a ‘colourless’ member of the underclass who were once slaves to the Crosses. The two have been friends since early childhood. But that’s as far as it can go.

“Against a background of prejudice, distrust and mounting terrorist violence, a romance builds between Sephy and Callum - a romance that is to lead both of them into terrible danger.”

“Life and hard times in Dublin during the angry years leading up to World War I are the subject matter of this novel that bursts with memorable characters caught up in the bitter struggles of the age.”

The Color Purple, by Alice Walker

“This compelling and cherished classic tells the story of Celie. Raped by the man she calls father, her two children taken from her and forced into an ugly marriage, she has no one to talk to but God, until she meets a woman who offers love and support.”

To Kill a Mockingbird, by Harper Lee

“‘Shoot all the bluejays you want, if you can hit ‘em, but remember it’s a sin to kill a mockingbird’. This is a lawyer’s advice to his children as he defends the real mockingbird of the story - a black man charged with raping a white girl in the 30s.”

Unless, by Carol Shields

“At once the disturbing, ultimately consoling story of one family’s loss and a searing portrait of life at the dawn of the 21st century, Unless is a daring novel from the master of extraordinary fictions about so-called ‘ordinary’ lives.”

V for Vendetta, by Alan Moore

“This is a frightening and powerful story of the loss of freedom and individuality in a totalitarian England. Written against a backdrop of third term Thatcherism and tabloid rants against minorities, this is a work of startling clarity.”