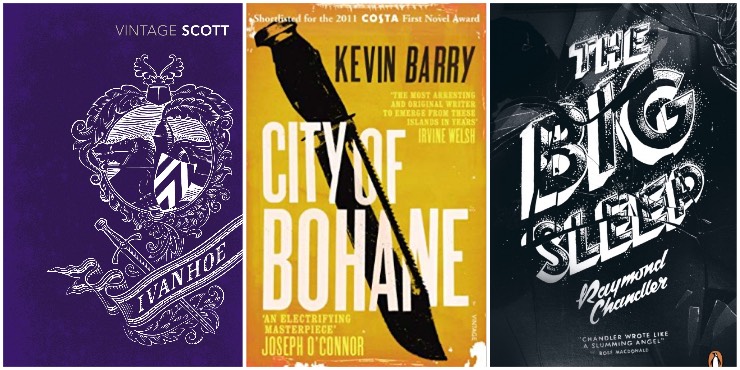 As part of Novels That Shaped Our World, the BBC’s year-long celebration of literature, a panel of writers, curators and critics have selected 100 books that have had an impact on their lives, split into ten monthly themes. March’s theme is Adventure.

City of Bohane, by Kevin Barry

“City of Bohane is a visionary novel that blends influences from film and the graphic novel, from Trojan beats and calypso rhythms, from Celtic myth and legend, from fado and the sagas, and from all the great inheritance of Irish literature.”

Eye of the Needle, by Ken Follett

“His weapon is the stiletto, his codename: The Needle. He is Henry Faber, coldly professional, a killer, Germany’s most feared deep-cover agent in Britain. His task: to discover the Allies’ plans for D-Day, and get them to Germany at all costs.”

For Whom the Bell Tolls, by Ernest Hemingway

“Hemingway’s classic portrayal of the Spanish Civil War, seen through the eyes of an American fighting on the Republican side, captures the excitement and danger of war in a way few other works of fiction have been unable to do.”

His Dark Materials, by Philip Pullman

Follow Lyra and her daemon Pan on the adventure of a lifetime from Oxford to the North to other worlds with the full trilogy.

“One of the most enduringly popular historical adventure novels of all time, Ivanhoe features action, intrigue and romance plus a cast of characters that includes Richard the Lionheart, Robin Hood, noble knights and fair maidens.”

“When Richard Hannay, the hero of The Thirty-Nine Steps, is recalled by the head of British Intelligence from the Western Front at a critical moment in the battle for France, he has little idea that his contribution to the war effort will be much more crucial than the command of his brigade in Flanders.”

The Big Sleep, by Raymond Chandler

“An early morning call to a dying millionaire throws private eye Philip Marlowe into West Hollywood’s hidden world of blackmail, menace and muscle. Knowing he must protect this man’s daughters Marlowe didn’t realise he would become so involved.”

The Hunger Games, by Suzanne Collins

“16-year-old Katniss Everdeen regards it as a death sentence when she is forced to represent her district in the annual Hunger Games, a fight to the death on live TV. But Katniss has been close to death before and survival, for her, is second nature.”

There are 21 books in this classic series set during the Napoleonic Wars - the first three are Master and Commander, Post Captain and HMS Surprise.

“Sauron, the Dark Lord, has gathered to him the Rings of Power - the means by which he will be able to rule the world. All he lacks in his plan for dominion is the Ruling Ring, which has fallen into the hands of the hobbit Bilbo Baggins.”