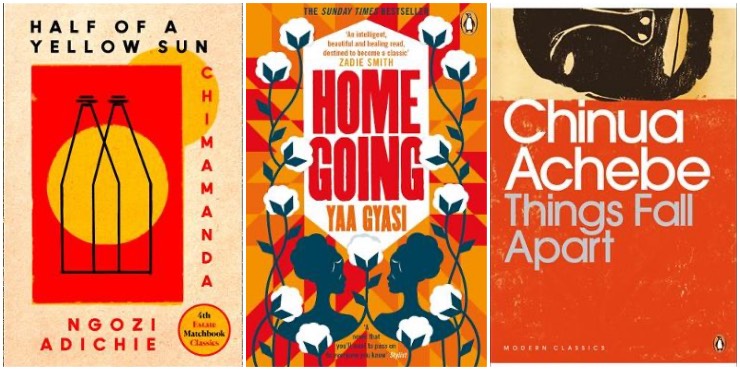 As part of Novels That Shaped Our World, the BBC’s year-long celebration of literature, a panel of writers, curators and critics have selected 100 books that have had an impact on their lives, split into ten monthly themes. January’s theme is Identity.

“Terrible, unspeakable things happened to Sethe at Sweet Home, the farm where she lived as a slave for so many years until she escaped to Ohio. Her new life is full of hope but 18 years later she is still not free. Sethe’s new home is not only haunted by the memories of her past but also by the ghost of her baby, who died nameless.”

“Jakob Beer is seven years old when he is rescued from the muddy ruins of a buried village in Nazi-occupied Poland. Of his family, he is the only one who has survived. Under the guidance of the Greek geologist Athos, Jakob must steel himself to excavate the horrors of his own history.”

Half of a Yellow Sun, by Chimamanda Ngozi Adichie

“Set in Nigeria during the 1960s, this novel contains three main characters who get swept up in the violence during these turbulent years. It is about Africa, about the end of colonialism, about class and race, and the ways in which love can complicate these things.”

“Effia and Esi: two sisters with two very different destinies. One sold into slavery; one a slave trader’s wife. The consequences of their fate reverberate through the generations that follow.

“Taking us from the Gold Coast of Africa to the cotton-picking plantations of Mississippi; from the missionary schools of Ghana to the dive bars of Harlem, spanning three continents and seven generations, Yaa Gyasi has written a miraculous novel - the intimate, gripping story of a brilliantly vivid cast of characters and through their lives the very story of America itself.”

“Returning to England after the war Gilbert Joseph is treated very differently now that he is no longer in an RAF uniform. Joined by his wife Hortense, he rekindles a friendship with Queenie, who takes in Jamaican lodgers. Can their dreams of a better life in England overcome the prejudice they face?”

The Bell Jar, by Sylvia Plath

“The Bell Jar is Sylvia Plath’s account of a young woman’s breakdown. Renowned for its intensity and its vivid prose, the novel follows her attempted suicide, hospitalisation and recovery.”

The God of Small Things, by Arundhati Roy

“Set against a background of political turbulence in Kerala, this is the story of twins Esthappen and Rahel who try to craft a childhood for themselves amongst the vats of banana jam and heaps of peppercorns in their grandmother’s factory.”

“Things Fall Apart tells the story of Okonkwo, an important man in the Igbo tribe in the days when white men were first on the scene. Okonkwo becomes exiled from his tribe, as a result of his pride and his fears, with tragic consequences.”

“One of the most talked about debut novels of all time, White Teeth is a funny, generous, big-hearted novel, adored by critics and readers alike. Dealing - among many other things - with friendship, love, war, three cultures and three families over three generations, one brown mouse, and the tricky way the past has of coming back and biting you on the ankle, it is a life-affirming, riotous must-read of a book.”