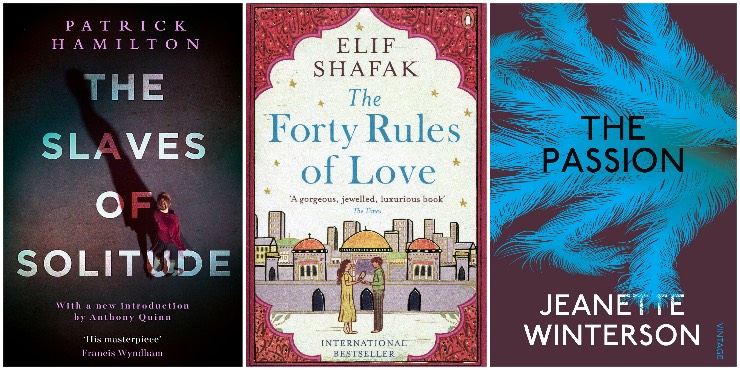 As part of Novels That Shaped Our World, the BBC’s year-long celebration of literature, a panel of writers, curators and critics have selected 100 books that have had an impact on their lives, split into ten monthly themes. February’s theme is Love, Sex & Romance.

“This tale concerns the trials and tribulations of a single, girl-about-town on an optimistic but doomed quest for self-improvement. If she could just get down to 8st 7lb, stop smoking and develop inner poise, all would be resolved.”

“Katherine and Michael meet at a party. The attraction between them is instantaneous. Attraction grows to love and to an intense relationship. The future is not as simple as they want it to be as their parents insist they spend the summer apart.”

“David, a young American in 1950s Paris, is waiting for his fiancée to return from vacation in Spain. But when he meets Giovanni, a handsome Italian barman, the two men are drawn into an intense affair. After three months David’s fiancée returns and, denying his true nature, he rejects Giovanni for a ‘safe’ future as a married man. His decision eventually brings tragedy.

“Filled with passion, regret and longing, this story of a fated love triangle has become a landmark of gay writing. James Baldwin caused outrage as a black author writing about white homosexuals, yet for him the issues of race, sexuality and personal freedom were eternally intertwined.”

Pride and Prejudice, by Jane Austen

“Elizabeth Bennet is young, clever and attractive, but her mother is a nightmare and she and her four sisters are in dire need of financial security and escape in the shape of husbands. Soon the arrival of nice Mr Bingley and arrogant Mr Darcy in the neighbourhood turns all their lives upside down.”

Their Eyes Were Watching God, by Zora Neale Hudson

“At the age of 16, Janie is caught kissing the shiftless Johnny Taylor, so her grandmother quickly marries her off to an old man with 60 acres. Refusing to compromise in spite of society’s expectations, Janie endures two stifling marriages before meeting the man of her dreams.”

The Forty Rules of Love, by Elif Shafak

“Ella Rubinstein is 40 years old and unhappily married when she takes a job as a reader for a literary agent. She comes across an ancient Sufi manuscript and suddenly her life is transformed.”

The Passion, by Jeanette Winterson

“Henri had a passion for Napoleon and Napoleon had a passion for chicken. From Boulogne to Moscow Henri butchered for his Emperor and never killed a single man. Meanwhile, in Venice, the city of chance and disguises, Villanelle was born with the webbed feet of her boatman father - but in the casinos she gambled her heart and lost. As the soldier-chef’s love for Napoleon turns to hate he finds the Venetian beauty, and together they flee to the canals of darkness.”

The Slaves of Solitude, by Patrick Hamilton

“The Rosamund Tea Rooms boarding house is an oppressive place, as grey and lonely as its residents. For Miss Roach, ‘slave of her task-master, solitude’, a window of opportunity is suddenly presented by the appearance of a charismatic American lieutenant. His arrival brings change to the precarious society of the house.”