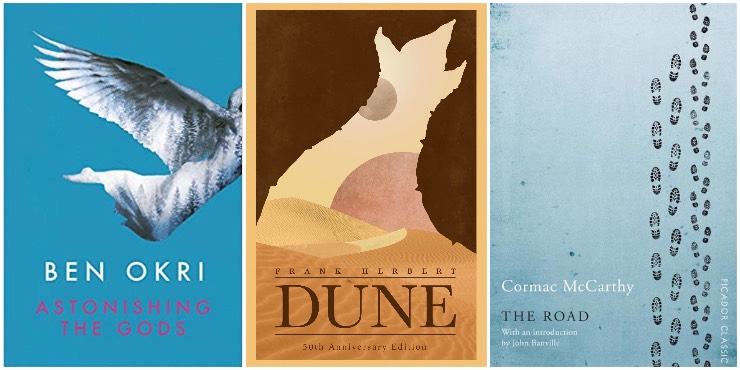 As part of Novels That Shaped Our World, the BBC’s year-long celebration of literature, a panel of writers, curators and critics have selected 100 books that have had an impact on their lives, split into ten monthly themes. April’s theme is Life, Death & Other Worlds.

A Game of Thrones, by George R. R. Martin

“In a land where summers can last decades and winters a lifetime, trouble is brewing. The cold is returning, and in the frozen wastes to the North of Winterfell, sinister and supernatural forces are massing beyond the kingdom’s protective Wall.

“At the centre of the conflict lie the Starks of Winterfell, a family as harsh and unyielding as the land they were born to. Sweeping from a region of brutal cold to a distant summertime kingdom of epicurean plenty, here is a tale of lords and ladies, soldiers and sorcerers, assassins and bastards, who come together in a time of grim omens.

“Amid plots and counterplots, tragedy and betrayal, victory and terror, the fate of the Starks, their allies, and their enemies hangs perilously in the balance, as each endeavours to win that deadliest of conflicts: the game of thrones.”

Astonishing the Gods, by Ben Okri

“A young man is transported to an enchanted isle in a quest to discover the secrets of visibility. He finds himself amidst a society of invisible beings who have built a utopia based on a single law - ‘every experience is repeated or suffered till you experience it properly and fully for the first time’.”

“This epic tale is set on the desert planet Arrakis, the focus for a complex political and military struggle with galaxy-wide repercussions. When Duke Atreides and his family take up court there they fall into a trap set by his rival.”

“One freezing morning, a lone man wandering across the Arctic ice caps is rescued from starvation by a ship’s captain. Victor Frankenstein’s story is one of ambition, murder and revenge. As a young scientist he pushed moral boundaries in order to cross the final frontier and create life. But his creation is a monster stitched together from grave-robbed body parts who has no place in the world, and his life can only lead to tragedy.”

“In 1956, toward the end of Reverend John Ames’s life, he begins a letter to his young son, a kind of last testament to his remarkable forebears. Ames is troubled too by his prodigal namesake, Jack Boughton, his best friend’s ne’er-do-well son, who seems to be a living contradiction of everything that Ames stands for.”

The Chronicles of Narnia by C. S. Lewis

This seven-title series needs no introduction:

The Discworld series by Terry Pratchett

There are 41 titles in the bestselling comic fantasy series and for the most part, they can be read in any order. Search for ‘Discworld novel’ in our catalogue and fill your boots.

“Ged is but a goatherd on the island of Gont when he comes by his strange powers over nature. Sent to the School of Wizards on Roke, he learns the true way of magic and proves himself a powerful magician.”

The Sandman series by Neil Gaiman

“The Sandman’ is a series of award-winning graphic novels. It blends modern myth and dark fantasy, in which historical drama, contemporary fiction and legend are interwoven.”

Start with Preludes & Nocturnes, The Doll’s House and Dream Country.

The Road, by Cormac McCarthy

“A father and his young son walk alone through burned America. Nothing moves in the ravaged landscape save the ash on the wind. They have nothing but a pistol to defend themselves against the men that stalk the road.”