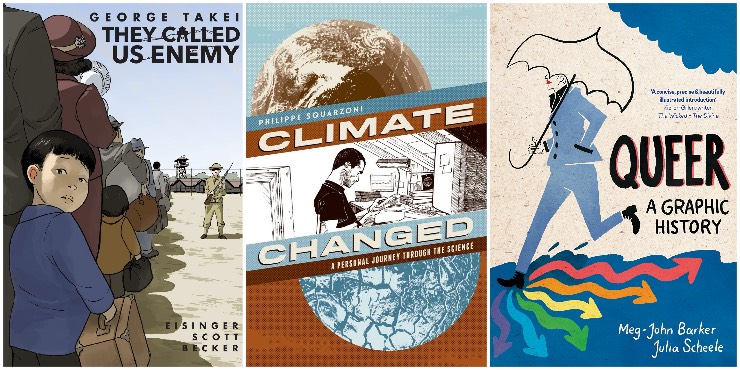 Have you read any non-fiction graphic novels? Elmswell Library Manager Miles Row picks out some of the best examples of the genre to get you started.

“In 1975 Nina Bunjevac’s mother fled her marriage and her adopted country of Canada and took Nina back to Yugoslavia to live with her parents. Peter, her husband, was a fanatical Serbian nationalist who had been forced to leave his country at the end of World War II and migrate to Canada.

“But even there he continued his activities, joining a terrorist group that planned to set off bombs at the homes of Tito sympathisers and at Yugoslav missions in Canada and the USA. Then in 1977, while his family were still in Yugoslavia, a telegram arrived to say that a bomb had gone off prematurely and Peter and two of his comrades had been killed.

“This text tells the story of Marjane Satrapi’s life in Tehran from six to 14, years that saw the overthrow of the Shah’s regime, the triumph of the Islamic Revolution & the devastating effects of war with Iraq. Satrapi paints a portrait of daily life in Iran & of the bewildering contradictions between home life & public life.”

Persepolis is also one of our Discovereads

“Much is known about scientists such as Darwin, Newton, and Einstein, but what about those with lesser-known names who have nevertheless contributed greatly to human knowledge? Celebrated author Darryl Cunningham draws compelling portraits of eight scientists who for reasons of gender, race, mental health, poverty - excessive wealth, even - have not won the recognition they deserve.”

“In December 1926, renowned crime novelist Agatha Christie vanished, sending shockwaves through British society. As the authorities scoured the country for her, theories and suspicions abounded: it was murder, a hoax, suicide, a publicity stunt, revenge.

“When she was finally located - ten days later, living under an assumed name in a hotel in Harrogate - she returned to normal life, refusing to explain what had happened. Despite Christie’s reputation for final act revelations, this episode of her life would be forever shrouded in mystery.

“In their intriguing graphic novel Agatha, Anne Martinetti, Guillaume Lebeau and Alexandre Franc use Christie’s enigmatic disappearance as a gateway to explore the life and character of the Queen of the Whodunit.”

“The story follows Rosa from her family life in Jewish Poland - where she became the leader of a general strike at age fifteen and was exiled from her homeland at eighteen - to her immersion into the then largest radical party in the world, the German Social Democratic Party, to her founding of the German Communist Party and leadership of the German revolution of 1919.”

“Twenty years in the making, this sweeping masterpiece charts Berlin through the rise of Nazism.

“Berlin is an intricate look at the fall of the Weimar Republic through the eyes of its citizens: Marthe Müller, a young woman escaping the memory of a brother killed in World War I; Kurt Severing, an idealistic journalist losing faith in the printed word as fascism and extremism take hold; the Brauns, a family torn apart by poverty and politics. Lutes weaves these characters’ lives into the larger fabric of a city slowly ripping apart.

“The city itself is the central protagonist in this historical fiction. Lavish salons, crumbling sidewalks, dusty attics, and train stations: all these places come alive in Lutes’ masterful hand. Weimar Berlin was the world’s metropolis, where intellectualism, creativity, and sensuous liberal values thrived, and Lutes maps its tragic, inevitable decline. Devastatingly relevant and beautifully told, Berlin is one of the great epics of the comics medium.”

“Kat had no responsibilities and nothing to tie her down. But she had graduated university with no plans. She was an artist who hadn’t drawn in five years. She was lost. What’s more, she’d been avoiding admitting to herself something that all those around her knew; that her boyfriend, Richard, has a serious problem with alcohol.

“Looking for a fresh start, the two of them quit Mexico for what they expected to be an adventure of a lifetime. It led to experiences that changed both their lives and to Kat rediscovering a love of art, a lifelong attachment to Mexico and the strength to move on.”

Brazen: rebel ladies who rocked the world, by Pénélope Bagieu

“With her characteristic wit, dazzling drawings and engaging storytelling, award-winning artist Pénélope Bagieu illustrates surprising and lesser-known portraits of courageous women rejecting cultural norms through the ages and from all over the world; from a little girl who grew up to discover that being a witch was better than being a princess, to the Queen of Ndongo, a bearded lady, rebel revolutionary sisters and an animal whisperer.”

“Safe Area Goražde focuses on the Muslim enclave which was besieged by Bosnian Serbs during the war. Sacco’s drawings are stark, realistic visions of the grey, depressing world of a land mangled by artillery shells and deformed by poverty.”

“Based on the analysis of the intergovernmental Panel on Climate Change (IPCC), but seen through the perspective of everyman journalist Philippe Squarzoni, this graphic novel explains how our environment functions; outlines the consequences of climate change and asks: is our society able to pursue a proactive policy in regard to ecological issues?”

“An original graphic novel celebrating the life of the glorious athlete who metamorphosed from Cassius Clay to become a three-time heavyweight boxing legend, activist, and provocateur: Muhammad Ali.

“Not only a titan in the world of sports but in the world itself, he dared to be different and to challenge and defy through his refusal to be drafted to fight in Vietnam, his rejection of his “slave” name, and ultimately his final fight with his body itself through a thirty-year battle with Parkinson’s disease. Witness what made Ali different, what made him cool, what made him the Greatest.”

“March is a vivid, first-hand account of John Lewis’ lifelong struggle for civil and human rights (including his key roles in the historic 1963 March on Washington and the 1965 Selma-Montgomery March), meditating in the modern age on the distance travelled since the days of Jim Crow and segregation.”

“Nora Krug grew up as a second-generation German after the end of the Second World War, struggling with a profound ambivalence towards her country’s recent past. Travelling as a teenager, her accent alone evoked raw emotions in the people she met, an anger she understood, and shared.

“Seventeen years after leaving Germany for the US, Nora Krug decided she couldn’t know who she was without confronting where she’d come from. In Heimat, she documents her journey investigating the lives of her family members under the Nazi regime, visually charting her way back to a country still tainted by war. Beautifully illustrated and lyrically told, Heimat is a powerful meditation on the search for cultural identity, and the meaning of history and home.”

“From identity politics and gender roles to privilege and exclusion, Queer explores how we came to view sex, gender and sexuality in the ways that we do; how these ideas get tangled up with our culture and our understanding of biology, psychology and sexology; and how these views have been disputed and challenged.

“Along the way we look at key landmarks which shift our perspective of what’s ‘normal’ – Alfred Kinsey’s view of sexuality as a spectrum, Judith Butler’s view of gendered behaviour as a performance, the play Wicked, or moments in Casino Royale when we’re invited to view James Bond with the kind of desiring gaze usually directed at female bodies in mainstream media.

“Presented in a brilliantly engaging and witty style, this is a unique portrait of the universe of queer thinking.”

“George Takei has captured hearts and minds worldwide with his captivating stage presence and outspoken commitment to equal rights. But long before he braved new frontiers in Star Trek, he woke up as a four-year-old boy to find his own birth country at war with his father’s and their entire family forced from their home into an uncertain future. In 1942, at the order of President Franklin D. Roosevelt, every person of Japanese descent on the west coast was rounded up and shipped to one of ten ‘relocation centres,’ hundreds or thousands of miles from home, where they would be held for years under armed guard.

“They Called Us Enemy is Takei’s firsthand account of those years behind barbed wire, the joys and terrors of growing up under legalised racism, his mother’s hard choices, his father’s faith in democracy, and the way those experiences planted the seeds for his astonishing future.”

“Ethel & Ernest is the story of Raymond Briggs’ parents’ marriage, from their first, chance encounter to their deaths, with nothing invented and nothing embroidered, told in Briggs’ unique strip-cartoon format.”