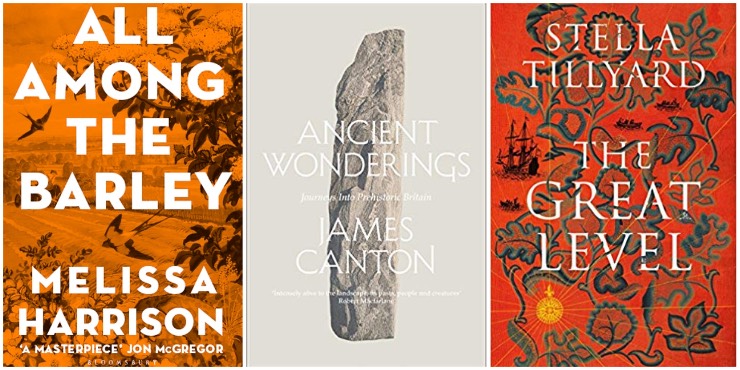 This year’s New Angle Prize longlist - which recognises literature associated with or influenced by East Anglia - is an eclectic mix of fiction, memoir, poetry, nature, history, politics and more.

The competition celebrates literature associated with or influenced by East Anglia. It is organised by the Ipswich Institute and sponsored by Gotelee Solicitors and Scrutton Bland accountants. The winner, who receives £2,500, will be announced at an awards dinner on Wednesday 3 July.

Low Country: Brexit on the Essex Coast, by Tom Bolton

“Spanning both landscape and political writing, Low Country interrogates the natural and social environments of Essex, asking why its particular politics is so pronounced, and what we can learn from the county’s role in shaping the nation.”

“Ancient Wonderings tells a tale of stepping into the past, of journeying across Britain’s wildest lands on a trail of prehistoric worlds. James Canton immerses himself into the landscape, chasing physical obsessions of prehistory: stone circles, flint arrowheads, sacred stones, gold, tin, and a lost Roman road. He explores those wonders of the natural world which occupied ancient minds: the night sky, shooting stars, the rising and setting sun.”

Self & I, by Matthew De Abaitua

“The scene is a remote cottage in Suffolk in the 1990s. Will Self, newly divorced, is the in-demand enfant terrible of the British literary scene. Matthew De Abaitua, an eager young writer fresh out of Malcolm Bradbury’s Creative Writing course at the University of East Anglia, is excited to be hired as his ‘amanuensis’. It’s not obvious what that intriguing job title will entail.

“In this unique, frank and often very funny portrait of one of our most talked-about and controversial literary figures, this book charts the highs and lows of the experience.”

Tracks in the Sand: a railwayman’s war, by James & Catherine Dodds

“Tim Foster first saw action in Gallipoli and was lucky to survive. Taking a camera with him to his next campaign in Egypt and Palestine he recorded everything around him, sending photographs home with his letters. At the Suez Canal he was in charge of a light railway as part of the Canal Defence Force. As the war advanced he was transferred to the Royal Engineers to operate the military railway under construction through the Sinai desert. In Palestine he became the first English station master at Jerusalem before finally returning home to his sweetheart seven months after the war had ended.”

The judges say: “From a trunk filled with family memories, letters and photographs, James Dodd and his wife created this poignant retelling of his grandparents’ courtship and enduring love during their separation in the First World War.”

All Among the Barley, by Melissa Harrison

“The autumn of 1933 is the most beautiful Edie Mather can remember. In the fields and villages around her beloved Wych Farm, however, the Great War still casts a shadow over a community impoverished by economic depression and threatened by change. Change, too, is coming to Edie, who at fourteen must soon face the unsettling pressures of adulthood.

“Glamorous outsider Constance FitzAllen arrives from London to document fading rural traditions and beliefs, urging all who will listen to resist progress and return to the old ways - but some wonder whether there might be more to the older woman than meets the eye.

“As harvest approaches and the future of Wych Farm itself grows uncertain, Edie must somehow find a way to trust her instincts and save herself from disaster.”

The judges say: “A striking and powerfully imaginative collection of poems which really gives us the chance to consider the natural world around us in all its details.”

“1973. Swallow’s Farmhouse in deep, rural Norfolk is home to Your People, a commune of free-thinkers and poets seeking a better way. But beneath the veneer of a nurturing, alternative lifestyle, an atmosphere of jealousy and threat is pushing utopia towards the brink of its inevitable collapse.

“Raising herself amidst the chaos is a twelve-year-old survivor, desperately preoccupied with her transition into womanhood. With her mute sister, beloved dog and the re-defining force of her emerging appetites, she marches resolutely towards her future, venturing - with hilarious and horrifying results - through the minefield of an adult world built on hypocrisy and misplaced ideals.”

The Ballad of Syd & Morgan, by Haydn Middleton

“A beautiful young man dressed in Cuban heels and a crushed-velvet jacket cuts a dash as he strides up Silver Street in his native Cambridge, heading for the ornate splendour of King’s College. It is 1968. He is the 22-year-old Syd Barrett of Pink Floyd, and his destination is home to the great Edwardian novelist, 89-year-old E M Forster.

“What follows is a tender exchange of truths between two men belonging to opposite ends of the 20th century, but who find within each other’s company shadows of the same demons, loves and losses as well as the familiar weight of the creative impulse. They become unlikely comrades passing fleetingly through each other’s lives.”

The Wound Register, by Esther Morgan

“Esther Morgan’s fourth collection explores family history through the generations after death and loss in wartime, as well as motherhood, love and responsibility.”

The judges say: “This book of poems is based around the Wound Register, or Casualty Book of the Norfolk Regiment during the First World War – Morgan’s East Anglian family history is woven into the poems including her own present life as a mother.”

The East Country: almanac tales of valley and shore, by Jules Pretty

“The East Country is a work of creative nonfiction in which the acclaimed nature writer Jules Pretty integrates memoir, natural history, cultural critique, and spiritual reflection into a single compelling narrative.

“Pretty frames his book around Aldo Leopold and his classic A Sand County Almanac, bringing Leopold’s ethic — that some could live without nature but most should not — into the twenty-first century.

“In The East Country, Pretty follows the seasons through seventy-four tales set in a variety of landscapes from valley to salty shore. He convinces us that we should all develop long attachments to the local, observing that the land can change us for the better.”

The Great Level, by Stella Tillyard

“In 1649 Dutch engineer Jan Brunt arrives in Ely to begin the great endeavour of levelling and draining the Fens. His life and work are bound by order, measurement and science. England is in the throes of Civil War and Cromwell’s troops are amassing, yet the real danger for him is water and the many labyrinthine channels that encompass the Great Level. Then one day lost on the level he spies a Fenswoman and everything he thought he knew starts to unravel.

“Many years later, now a distinguished gentleman in Nieuw Amsterdam in the bustling hubbub of the New World, Jan receives a note, unsigned.”

“Josephine Tey is in Cambridge, a town gripped by fear and suspicion as a serial rapist stalks the streets, and in the shadow of King’s College Chapel, Detective Chief Inspector Archie Penrose faces some of the most horrific and audacious murders of his career.”

The judges say: “Set in Cambridge and along the Suffolk coast, this is a detective story which combines the ghost stories of MR James with a gripping tale of murder and revenge.”