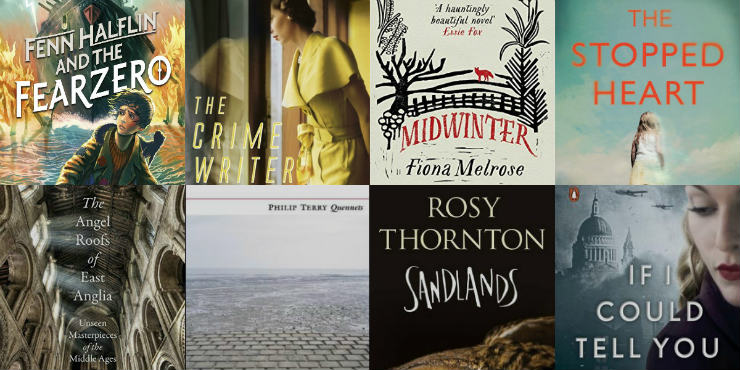 The competition celebrates literature associated with or influenced by East Anglia. It is organised by the Ipswich Institute and sponsored by Gotelee Solicitors and Scrutton Bland accountants. The winner, who receives £2,500, will be announced at an awards dinner on Wednesday 6 September.

“In a world that has been ravaged by flooding, Fenn Halflin learns the truth about his past - a secret that forces him to flee the safety of his home as he is chased across the vast sea by the ruthless Terra Firma and their cold-blooded leader, Chilstone.

“Finding shelter on a decaying island, Fenn is taken in by child survivors in hiding, and he begins a deadly game of cat-and-mouse with the Terra Firma, who will stop at nothing to find him. But as Chilstone’s dreaded Fearzero ship appears on the horizon, and the water levels continue to rise, it seems that Fenn’s hopes of escape will be washed away for ever.”

Author Francesca Armour-Chelu is one of our very own librarians, and ran a story-writing class for children at last years Suffolk Libraries Bookfest. The judges described Fenn Halflin and the Fearzero as “a thought-provoking debut in which the threat from the east coast sea is not all there is to worry about.”

Murmurations of Love, Grief and Starlings, by Julia Blackburn

“A meditation by Julia Blackburn on the sudden death of her husband, accompanied by photographs of starlings in ‘sympathetic flight’.”

The judges said of Murmurations of Love, Grief and Starlings, “the swirl of starlings in the evening skies become a metaphor and celebration of the human spirit and a life lived to the full.”

Threads: the delicate life of John Craske, by Julia Blackburn

“John Craske, a Norfolk fisherman, was born in 1881, and in 1917, when he had just turned 36, he fell seriously ill. For the rest of his life he kept moving in and out of what was described as ‘a stuporous state’.

“In 1923 he started making paintings of the sea and boats and the coastline seen from the sea, and later, when he was too ill to stand and paint, he turned to embroidery, which he could do lying in bed. His embroideries were also the sea, including his masterpiece, a huge embroidery of The Evacuation of Dunkirk.

“Very few facts about Craske are known, and only a few scattered photographs have survived, together with accounts by the writer Sylvia Townsend Warner and her lover Valentine Ackland, who discovered Craske in 1937. So Julia Blackburn’s account of his life is far from a conventional biography.”

Julia Blackburn’s second title to make the longlist was described by the judges as “beautifully written, beautifully illustrated and beautifully produced – a life of rediscovered genius.”

The Crime Writer, by Jill Dawson

“In 1964, the eccentric American novelist Patricia Highsmith is hiding out in a cottage in Suffolk, to concentrate on her writing and escape her fans. She has another motive too - a secret romance with a married lover based in London.

“Unfortunately it soon becomes clear that all her demons have come with her. Prowlers, sexual obsessives, frauds, imposters, suicides and murderers: the tropes of her fictions clamour for her attention, rudely intruding on her peaceful Suffolk retreat. After the arrival of Ginny, an enigmatic young journalist bent on interviewing her, events take a catastrophic turn.”

The judges called The Crime Writer “a destabilising book in which you’re never quite sure what’s real, imagined, or simply the result of madness.”

“Daisy Johnson’s Fen is a liminal land. Real people live their lives here. They wrestle with familiar instincts, with sex and desire, with everyday routine. But the wild is always close at hand, ready to erupt.

“This is a place where animals and people commingle and fuse, where curious metamorphoses take place, where myth and dark magic still linger. So here a teenager may starve herself into the shape of an eel. A house might fall in love with a girl. A woman might give birth to a - well what? English folklore and a contemporary eye, sexual honesty and combustible invention - in ‘Fen’, these elements have come together to create a singular, startling piece of modern fiction.”

The judges commented, “the flatlands of East Anglia are a setting for this gripping and refreshing debut collection of short stories.”

“Father and son, Landyn and Vale Midwinter, are men of the land. Suffolk farmers. Times are hard and they struggle to sustain their property, their livelihood and their heritage in the face of competition from big business.

“But an even bigger, more brutal fight is brewing: a fight between each other, about the horrible death of Cecelia, beloved wife and mother, in Zambia ten years earlier. A past they have both refused to confront until now. Over the course of a particularly mauling Suffolk winter, Landyn and Vale grapple with their memories and their pain, raking over what remains of their fragile family unit, constantly at odds and under threat of falling apart forever. While Vale makes increasingly desperate decisions, Landyn retreats, finding solace in the land, his animals - and a fox who haunts the farm and seems to bring with her both comfort and protection.”

The judges described Midwinter as “an incredibly-assured debut that explores the emotions of men of the land, which we don’t often see.”

“Some memories are too powerful to live only in the past. During a ferocious storm, a red-haired stranger appears in the garden of a small farming cottage. Eliza and her parents take him in. But very soon, it’s clear he has no intention of leaving.

“A century later, Mary and Graham have experienced every parent’s worst nightmare. Now, escaping their old London life, the memories and the headlines, they have found an idyllic new home in rural Suffolk. A cottage, a beautiful garden. The perfect place to forget. To move on. But in ‘The Stopped Heart’, the past never dies.”

The judges commended The Stopped Heart, as “an examination of deep loss that is a fine example of the author’s power to produce dark and scary material.”

“Set in Victorian London and an Essex village in the 1890s, and enlivened by the debates on scientific and medical discovery which defined the era, The Essex Serpent has at its heart the story of two extraordinary people who fall for each other, but not in the usual way. They are Cora Seaborne and Will Ransome.

“Cora is a well-to-do London widow who moves to the Essex parish of Aldwinter, and Will is the local vicar. They meet as their village is engulfed by rumours that the mythical Essex Serpent, once said to roam the marshes claiming human lives, has returned.”

Described by the judges as “a novel that has the power to surprise, genuinely – set amid the beauty and oppressive nature of the muddy Essex shores.”

The Angel Roofs of East Anglia: unseen masterpieces of the middle ages, by Michael Rimmer

“By the late middle ages English constructional and decorative woodworking had attained a level of skill and sophistication unrivalled in Europe. East Anglia’s churches are home to one of the most spectacular and distinctive products of this medieval expertise: the angel roof.

“Built mainly between 1400 and 1530, and overwhelmingly an East Anglian phenomenon, angel roofs were an expression of religious belief, wealth, status and regional skill. Using specialist lenses and techniques to capture distant and inaccessible detail, Michael Rimmer’s photographs reveal the unseen beauty of East Anglia’s angel roofs and the vision of the medieval craftsmen who made them, while his engaging and knowledgeable text brings to life the personalities, economics and power structures of 15th century East Anglia.”

According to the judges, The Angel Roofs of East Anglia is “a fine work which does a wonderful job explaining what’s on our doorsteps, how it got there, and why.”

“In Quennets Philip Terry develops a sonnet-like form invented by the Oulipian poet Raymond Queneau. Across three sequences, the quennet is reworked and refigured in response to three perimeter landscapes.

“The first sequence, Elementary Estuaries, is inspired by a series of walks along the Essex estuary, the poems’ appearance on the page suggesting the landscape’s expansive estuarine vistas, its pink sail lofts and windswept gorse, beach huts and distant steeples.

“In the second sequence, written after a series of walks around the Berlin Wall Trail, or Mauerweg, the form changes to reflect the physical, almost bodily tension of the wall as an architectural and social obstruction.

The judges said, “sparse by design, this poetry is a strong reminder of the power of words when allied to our imagination, experience and emotions.”

“This short story collection is inspired by the ‘sandlings’ of coastal Suffolk, by the landscape and its flora and fauna, as well as by its folklore and historical and cultural heritage.”

The judges described Sandlands as a collection of “short stories that capture perfectly that the past and present are separated only by a thin screen.”

If I Could Tell You, by Elizabeth Wilhide

“Suffolk, 1939: Julia is a young wife and mother, whose husband Richard’s good looks mask his crashing conventionality. When she falls for the dashing but unreliable documentary filmmaker Dougie she gives up her staid, provincial life and moves to London to live a bohemian life with him, unwittingly and agonisingly losing the right to see her young son along the way.

“In London she quickly realises how useless and unskilled she is at anything, and the great romance is not all it seemed. But then the war intervenes, a new sense of purpose arrives, and Julia discovers she has a rare gift.”

According to the judges, If I Could Tell You is “a story that forces us to confront the uncomfortable questions we try to hide in the darkest corners of our minds.”