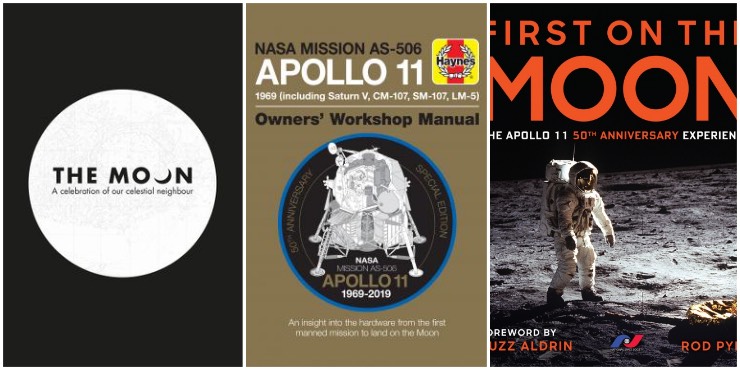 20 July marks 50 years since Neil Armstrong and Buzz Aldrin became the first people to walk on the Moon. Find out all about the Moon and its visitors with these top titles.

The Moon: a celebration of our celestial neighbour

“Written by the Royal Observatory’s leading astronomers and moon experts, this landmark work explores man’s fascination with our only natural satellite. Learn how the moon influences life on earth, how nature and even human behaviour patterns are all subject to this heavenly body. Illustrated with 250 colour and black and white photographs, this book is a treasure trove for all amateur and professional Moon watchers.”

Coffee table book with the unique selling point that many of the pictures are in 3-D, to give the reader a unique experience.

The Moon: a history for the future, by Oliver Morton

This is an amazing book filled with interesting facts. For example:

Candid personal reflections from the men who have been to the moon accompanied by some stunning photographs.

“This thrilling photo book features previously-unpublished photographs from the NASA archives, meticulously digitised, captured by Apollo astronauts during their missions. Accompanying these extraordinary photographs are fascinating insights into the Apollo missions, including a detailed Foreword from NASA astronaut, Walter Cunningham.”

Apollo 11…: an insight into the hardware from the first manned mission to land on the Moon, by Christopher Riley & Phil Dolling

Haynes, who are most famous for car repair manuals, have branched into other areas recently. In this book they bring their usual technical expertise to show how NASA technology put a man on the Moon.

First on the Moon: the Apollo 11 50th anniversary experience, by Rod Pyle

“First to the Moon tells the incredible story of Neil Armstrong, Buzz Aldrin and Michael Collins with compelling first-hand accounts and a strong sense of narrative that wrings tension from history. Pyle has spent years combing NASA archives and private collections for documents and memorabilia from the mission, including previously unpublished materials.

“Using elements ranging from accessible explanations of technical problems to reproductions of the original 1969 documents, this gorgeously designed book will fully immerse the reader in the Space Age.”

The Right Stuff, by Tom Wolfe

“Originally published in 1979, Tom Wolfe’s The Right Stuff tells the story of supersonic flight testing from the breaking of the sound barrier in 1949 to NASA’s Mercury 7 rocket programme. Wolfe’s story, however, was not about technology but about the bravery and sacrifices of the pilots.”

“The flight of Apollo 11 made Buzz Aldrin one of the most famous men on the planet, yet few people know the rest of the story. In Magnificent Desolation, Aldrin not only gives us his account of the lunar landing that came within seconds of failure, he also opens up about his more personal trials and triumphs back on Earth.”

“Damien Chazelle directs this US biographical drama about astronaut Neil Armstrong (Ryan Gosling) as he prepares to lead NASA’s Apollo 11 mission to land a man on the Moon in the late 1960s.

“As pressure begins to mount around the impending mission and recurrent failings of the spacecraft leave the project hanging in the balance, Neil must question whether the need to fulfil mankind’s biggest adventure outweighs the risk of possibly leaving his family behind forever and never returning home.