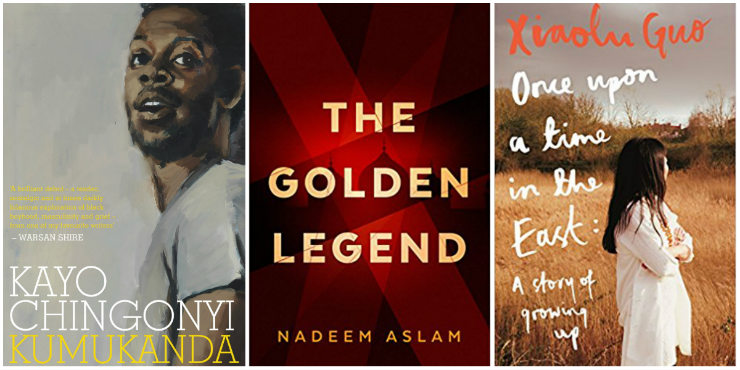 Expand your reading horizons with a book from the shortlist for the 2018 Jhalak prize. Now in its second year, the prize celebrates the work by writers of colour in contemporary Britain across media and genres. The winner will be announced on 15 March.

The Golden Legend, by Nadeem Aslam

“When shots ring out on the Grand Trunk Road, Nargis’s life begins to crumble around her. Her husband, Massud - a fellow architect - is caught in the crossfire and dies before she can confess to him her greatest secret. Under threat from a powerful military intelligence officer, who demands that she pardon her husband’s American killer, Nargis fears that the truth about her past will soon be exposed. For weeks someone has been broadcasting people’s secrets from the minarets of the city’s mosques and, in a country where the accusation of blasphemy is a currency to be bartered, the mysterious broadcasts have struck fear in Christians and Muslims alike.

“Against this background of violence and fear, two outsiders - the young Christian woman Helen and the mysterious Imran from Kashmir - try to find an island of calm in which their love can grow.”

“A writer of power and precision, as striking on the page as he is on the stage, this is Kayo Chingonyi’s much-anticipated first collection.

“In poems that are at once assured and incisive, he eloquently confronts issues of race, self-portraiture and self-perception to shine a light on all that is dark, hidden, ‘smuggled from polite conversation’.”

Why I’m No Longer Talking to White People About Race, by Reni Eddo-Lodge

“In February 2014, Reni Eddo-Lodge wrote about her frustration with the way discussions of race and racism in Britain were constantly being led by those who weren’t affected by it. She posted the piece on her blog, and gave it the title: ‘Why I’m No Longer Talking to White People about Race’.

“Her powerful, passionate words hit a nerve. The post went viral, and comments flooded in from others desperate to speak up about their own, similar experiences. Galvanised by this response, she decided to dig into the source of these feelings; this clear hunger for an open discussion. The result is a searing, illuminating, absolutely necessary exploration of what it is to be a person of colour in Britain today.”

Once Upon a Time in the East: a story of growing up, by Xiaolu Guo

“Novelist Xiaolu Guo writes the extraordinary story of her childhood in rural China, her young adulthood in the Beijing underground and her move to the West in search of freedom of expression.”

When I Hit You: or, a portrait of the writer as a young wife, by Meena Kandasamy

“Seduced by politics and poetry, the unnamed narrator falls in love with a university professor and agrees to be his wife, but what for her is a contract of love is for him a contract of ownership.

“As he sets about reducing her to his idealised version of a kept woman, bullying her out of her life as an academic and writer in the process, she attempts to push back - a resistance he resolves to break with violence and rape.”