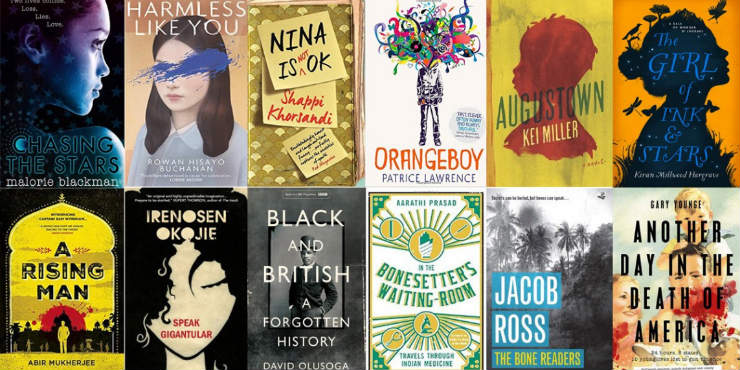 Many readers have made a new year’s resolution to read more diversely by making a concerted effort to pick up more books by non-white authors, thereby being more inclusive, discovering different voices, viewpoints and ideas, and learning about unfamiliar experiences and cultures. We think that the longlist for the inaugural Jhalak Prize will prove an excellent place to start.

The new prize, co-founded by authors Sunny Singh and Nikesh Shukla and run in conjunction with Media Diversified and with support from the Authors’ Club and an anonymous benefactor, aims to champion British BAME writers who have been “often ignored, overlooked and erased.” It encompasses all genres, as well as traditionally- and self-published authors.

The Jhalak Prize shortlist will be announced on 6 February 2017. The winner, who wins a prize of £1,000, will be announced during the Bare Lit Festival in March 2017. The Prize will be judged by Sunny Singh, YA author Catherine Johnson, author and poet Alex Wheatle MBE, poet and broadcaster Musa Okwonga and author Yvette Edwards.

Chasing The Stars, by Malorie Blackman

“Olivia and her twin brother Aidan are heading alone back to Earth following the virus that wiped out the rest of their crew, and their family, in its entirety. Nathan is part of a community heading in the opposite direction. But on their journey, Nathan’s ship is attacked and most of the community killed. Only a few survive. Their lives unexpectedly collided, Nathan and Olivia are instantly attracted to each other, deeply, head-over-heels - like nothing they have ever experienced. But not everyone is pleased. Surrounded by rumours, deception, even murder, is it possible to live out a happy ever after?”

Malorie Blackman used to be the Children’s Laureate and her books are very popular, so this YA sci-fi title is bound to be a strong contender.

“‘Harmless Like You’ is set across New York, Berlin and Connecticut, following the stories of Yuki Oyama, a Japanese girl fighting to make it as an artist, and Yuki’s son Jay who, as an adult in the present day, is forced to confront his mother who abandoned him when he was only two years old.”

The Guardian says this is an “at times harrowing” novel, “which examines inherited identity.”

Nina Is Not OK, by Shappi Khorsandi

“Nina does not have a drinking problem. She likes a drink, sure. But what 17-year-old doesn’t? Nina’s mum isn’t so sure. But she’s busy with her new husband and five-year-old Katie. And Nina’s almost an adult after all. And if Nina sometimes wakes up with little memory of what happened the night before, then her friends are all too happy to fill in the blanks. Nina’s drunken exploits are the stuff of college legend. But then one dark Sunday morning, even her friends can’t help piece together Saturday night. All Nina feels is a deep sense of shame, that something very bad has happened to her.”

Comedian Shappi Khorsandi has withdrawn from the longlist, but we still think her book looks well worth a read.

“Not cool enough, not clever enough, not street enough for anyone to notice me. I was the kid people looked straight through. Not any more. Not since Mr Orange.

“Sixteen-year-old Marlon has made his mum a promise - he’ll never follow his big brother, Andre, down the wrong path. So far, it’s been easy, but when a date ends in tragedy, Marlon finds himself hunted. They’re after the mysterious Mr Orange, and they’re going to use Marlon to get to him. Marlon’s out of choices - can he become the person he never wanted to be, to protect everyone he loves?”

Orangeboy was shortlisted for the Costa Book Awards, Children’s Book category. The Costa judges described it as “a gripping topical thriller by a fresh new voice in children’s fiction.”

“Ma Taffy may be blind but she sees everything. So when her great-nephew Kaia comes home from school in tears, what she senses sends a deep fear through her. While they wait for his mama to come home from work, Ma Taffy recalls the story of the flying preacherman and a great thing that did not happen.

“A poor suburban sprawl in the Jamaican heartland, Augustown is a place where many things that should happen don’t, and plenty of things that shouldn’t happen do. For the story of Kaia leads back to another momentous day in Jamaican history, the birth of the Rastafari and the desire for a better life. ‘Augustown’ is a novel about inequality and aspiration, memory and myth, and the connections between people which can transcend these things but not always change them.”

According to The Guardian, “The social divisions of Jamaican society are explored through vivid vignettes in this atmospheric first novel … The idea of flight, spiritual, intellectual and physical, runs through the novel like a river.”

The Girl of Ink & Stars, by Kiran Millwood Hargrave

“When Isabella’s friend disappears, she volunteers to guide the search party. As a mapmaker’s daughter, she’s equipped with elaborate ink maps and knowledge of the stars, eager to navigate the island’s forgotten heart. But beneath the mountains a legendary fire demon awakens, and her journey is fraught with danger.”

This novel for young teens incorporates myths, magic and monsters.

A Rising Man, by Abir Mukherjee

“Captain Sam Wyndham, former Scotland Yard detective, is a new arrival to Calcutta. Desperately seeking a fresh start after his experiences during the Great War, Wyndham has been recruited to head up a new post in the police force. But with barely a moment to acclimatise to his new life or to deal with the ghosts which still haunt him, Wyndham is caught up in a murder investigation that will take him into the dark underbelly of the British Raj.

“A senior official has been murdered, and a note left in his mouth warns the British to quit India: or else. With rising political dissent and the stability of the Raj under threat, Wyndham and his two new colleagues – arrogant Inspector Digby and British-educated, but Indian-born Sergeant Banerjee, one of the few Indians to be recruited into the new CID – embark on an investigation that will take them from the luxurious parlours of wealthy British traders to the seedy opium dens of the city.”

The Daily Telegraph selected A Rising Man as one of its Books of 2016, describing it as “a lip-smacking and highly entertaining mystery, set in a Calcutta so convincingly evoked that readers will find sweat bursting from their foreheads.”

“In these stories Okojie creates worlds where lovelorn aliens abduct innocent coffee shop waitresses, where the London Underground is inhabited by the ghosts of errant Londoners caught between here and the hereafter, where insensitive men cheat on their mistresses and can only muster enough interest to fall for one-dimensional poster girls and where brave young women attempt to be erotically empowered at their own peril. Sexy, serious and at times downright disturbing, this brilliant collection sizzles with originality.”

According to The Guardian, “inner demons surface with surprising results in these explorations of alienation and mental deterioration.”

Black and British: a forgotten history, by David Olusoga

“David Olusoga’s ‘Black and British’ is a rich and revealing exploration of the extraordinarily long relationship between the British Isles and the people of Africa. Drawing on new genetic and genealogical research, original records, expert testimony and contemporary interviews, Black and British reaches back to Roman Britain, the medieval imagination and Shakespeare’s Othello. Unflinching, confronting taboos and revealing hitherto unknown scandals, Olusoga describes how black and white Britons have been intimately entwined for centuries.”

David Olusoga is a Bafta-award winning broadcaster and historian, and this book was tied in with a major BBC TV series. The Guardian described Black and British: a forgotten history as a “radical reappraisal of the parameters of history and the relationship between Britain and Africa.”

In the Bonesetter’s Waiting-room: travels through Indian medicine, by Aarathi Prasad

“India defies definition, and the story of medicine in India is similarly rich and complex: shaped by unique challenges and opportunities, uniting cutting-edge technological developments with ancient cultural traditions, fuelled by political changes which transformed the lives of millions and moulded by the energy of forceful individuals. Here, Aarathi Prasad investigates how Indian medicine came to be the way it is. Her travels will take her to bonesetter clinics in Jaipur and Hyderabad and the waiting-rooms of Bollywood’s best plastic surgeons, and introduce her to traditional healers as well as the world-beating heart surgeon who is revolutionising treatment of the poor around the globe.”

This Radio 4 Book of the Week looks both back at the past of Indian medicine, and forward to the challenges it will face in the future.

The Bone Readers, by Jacob Ross

“When Michael (Digger) Digson is recruited into DS Chilman’s new plainclothes squad in the small Caribbean island of Camaho he brings his own mission to discover who amongst a renegade police squad killed his mother in a political demonstration.

“Sent to London to train in forensics, Digger becomes enmeshed in Chilman’s obsession with a cold case, the disappearance of a young man whose mother is sure has been murdered. But along with his new skill in forensics, Digger makes rich use of the cultural knowledge he has gained from the Fire Baptist grandmother who brought him up, another kind of reader of bones.

“And when the enigmatic Miss K. Stanislaus joins him on the case, Digger finds that his science is more than outmatched by her observational skills. Together, they find themselves dragged into a world of secrets, disappearances and danger that demands every ounce of their brains, persistence and courage to survive.”

The first in a new crime series, according to The Guardian, “The Bone Readers is a page-turner, but its insights and language are equally testament to a literary novel of impressive depth and acuity.”

Another Day in the Death of America, by Gary Younge

“On Saturday 23 November 2013 ten children were shot dead. The youngest was nine; the oldest was nineteen. They fell in suburbs, hamlets and ghettos. None made the national news. It was just another day in the death of America, where on average seven children and teens are killed by guns daily. Younge picked this day at random, searched for their families and tells their stories. What emerges is a sobering, searing, portrait of youth and guns in contemporary America.”

Another Radio 4 Book of the Week, A Day in the Death of America is described by the Financial Times as “a book that feels both timely and utterly, hopelessly timeless.”