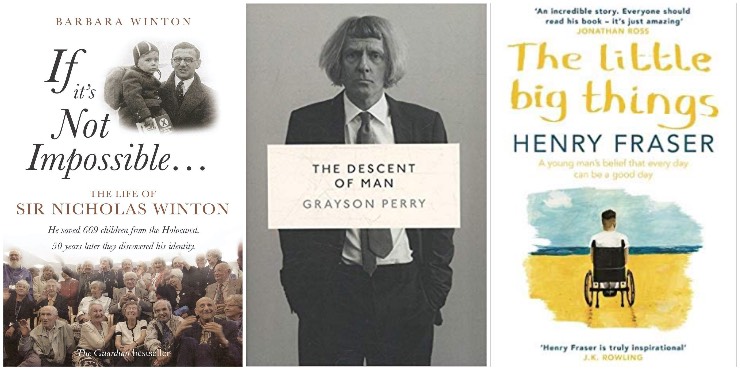 19 November is International Men’s Day. Stock Librarian Brandon King has chosen a selection of books by and about extraordinary men to mark the occasion.

“Henry Fraser was 17 years old when a tragic accident severed his spinal cord. Paralysed from the shoulders down, he has conquered unimaginable difficulty to embrace life and a new way of living. Through challenging adversity, he has found the opportunity to grow and inspire others.

Wall and Piece, by Banksy

Artistic genius, political activist, painter and decorator, mythic legend or notorious graffiti artist? The identity of Banksy remains unknown, but his work is prolific. He created an artwork overnight in Port Talbot to help to regenerate the local economy. He set up a stall in Central Park so he could sell his art to ordinary people at knock down prices without people knowing who he was and selling it on. He shredded one of his paintings after it had sold for $1.4m. His work turns up anonymously on walls where organisations and people need help.

First Man: the life of Neil A. Armstrong, by James R. Hansen

“In this authorised biography of Neil Armstrong, the first man on the moon, the author reveals it was the act of flying that had driven Armstrong rather than the pull of the destination, and describes Armstrong’s career as a fighter pilot in the Korean War right through to his most famous mission.”

The Fear Bubble: harness fear and live without limits, by Ant Middleton

“Ant Middleton is no stranger to fear: as a point man in the Special Forces, he confronted fear on a daily basis, never knowing what lay behind the next corner, or the next closed door. In prison, he was thrust into the unknown, cut off from friends and family, isolated with thoughts of failure and dread for his future. And at the top of Everest, in desperate, life-threatening conditions, he was forced to face up to his greatest fear, of leaving his children and wife without a father and husband.

“But fear is not his enemy. It is the energy that propels him. Thanks to the revolutionary concept of the ‘Fear Bubble’, Ant has learned to harness the power of fear and understands the positive force that it can become. Here Ant retells the story of his death-defying climb of Everest and reveals the concept of the ‘Fear Bubble’, showing how it can be used in our lives to help us break through our limits.”

The Descent of Man, by Grayson Perry

“What is masculinity and what can it become? It might seem like a luxury in a world facing climate change and vast imbalances in global wealth, but Grayson Perry sees masculinity as a highly active component in all the big issues. Tracing the contours of the dominant male role today, its history and its clearly defined rules, he explores everything from sex, seriousness and intimidation to clothing, childhood and power, providing a more modern model of manhood which may reach escape velocity from the gravity of traditional man.”

Can’t Hurt Me: master your mind and defy the odds, by David Goggins

“David Goggins had a nightmare childhood — poverty, prejudice, and physical abuse coloured his days and haunted his nights. But through self-discipline, mental toughness, and hard work, Goggins transformed himself from a depressed, overweight young man with no future into a U.S. Armed Forces icon and one of the world’s top endurance athletes.”

Born to Run, by Bruce Springsteen

“Since 2009, Bruce Springsteen has privately devoted himself to writing the story of his life, bringing to these pages the same honesty, humour and originality found in his songs. He describes growing up Catholic in Freehold, New Jersey, amid the poetry, danger and darkness that fuelled his imagination, leading up to the moment he refers to as ‘the Big Bang’: seeing Elvis Presley’s debut on The Ed Sullivan Show. From these humble beginnings, Springsteen goes on to recall the people and events who have shaped his extraordinary life.”

“Alan Turing was an extraordinary man who crammed into a life of only 42 years the careers of mathematician, codebreaker, computer scientist and biologist. He is widely regarded as a war hero grossly mistreated by his unappreciative country and it has become hard to disentangle the real man from the story. It is easy to cast him as a misfit, the stereotypical professor. But actually he was never a professor, and his nickname ‘Prof’ was given by his codebreaking friends at Bletchley Park.

“Here, Alan Turing’s nephew, Dermot Turing, takes a fresh look at the influences on his uncle’s life and creativity, and the later creation of a legend.”

If It’s Not Impossible…: the life of Sir Nicholas Winton, by Barbara Winton

“There are around 6000 people in the world today who owe their lives to Nicholas Winton. They are the descendants of a group of refugee children rescued by him from the Nazi threat in 1939. Some of them know of his existence and the part he played in their history, many others do not.”

War Doctor: surgery on the front line, by David Nott

“For more than twenty-five years, David Nott has taken unpaid leave from his job as a general and vascular surgeon with the NHS to volunteer in some of the world’s most dangerous war zones. From Sarajevo under siege in 1993, to clandestine hospitals in rebel-held eastern Aleppo, he has carried out life-saving operations and field surgery in the most challenging conditions, and with none of the resources of a major London teaching hospital. But he has also volunteered in areas blighted by natural disasters, such as the earthquakes in Haiti and Nepal.

“Driven both by compassion and passion, the desire to help others and the thrill of extreme personal danger, he is now widely acknowledged to be the most experienced trauma surgeon in the world. War Doctor is his extraordinary story.”