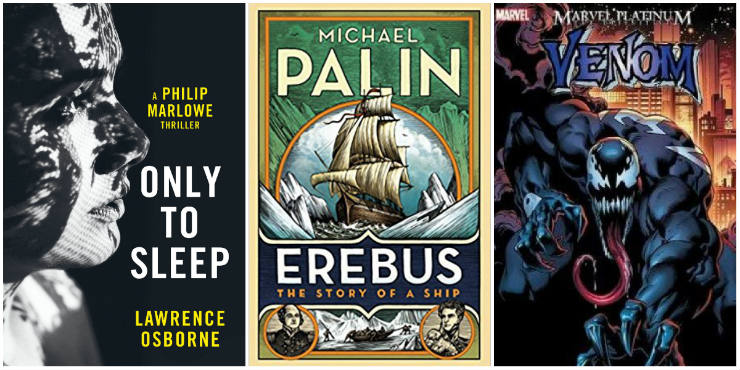 Erebus: the story of a ship, by Michael Palin

Radio 4 Book of the Week from the traveller and former Python.

“Michael Palin brings to life the world and voyages of HMS Erebus, from its construction in the naval dockyards of Pembroke, to the part it played in Ross’s Antarctic expedition of 1839-43, to its abandonment during Franklin’s ill-fated Arctic expedition, and to its final rediscovery on the seabed in Queen Maud Gulf in 2014.

“He explores the intertwined careers of the men who shared its journeys: the organisational genius James Clark Ross, who mapped much of the Antarctic coastline and oversaw some of the earliest scientific experiments to be conducted there; and the troubled Sir John Franklin, who, at the age of 60 and after a chequered career, commanded the ship on its final journey.”

The Spy and the Traitor: the greatest espionage story of the Cold War, by Ben MacIntyre

Another Radio 4 pick. MacIntyre tells the story of KGB Officer Oleg Gordievsky and his defection to the UK. This reads like a John le Carré thriller but it is all true.

“On a warm July evening in 1985, a middle-aged man stood on the pavement of a busy avenue in the heart of Moscow, holding a plastic carrier bag. In his grey suit and tie, he looked like any other Soviet citizen. The bag alone was mildly conspicuous, printed with the red logo of Safeway, the British supermarket. The man was a spy.

“A senior KGB officer, for more than a decade he had supplied his British spymasters with a stream of priceless secrets from deep within the Soviet intelligence machine. No spy had done more to damage the KGB. The Safeway bag was a signal: to activate his escape plan to be smuggled out of Soviet Russia.

“So began one of the boldest and most extraordinary episodes in the history of spying. Ben Macintyre reveals a tale of espionage, betrayal and raw courage that changed the course of the Cold War forever.”

First Man: the life of Neil A. Armstrong, by James R. Hansen

“In this authorised biography of Neil Armstrong, the first man on the moon, the author reveals it was the act of flying that had driven Armstrong rather than the pull of the destination, and describes Armstrong’s career as a fighter pilot in the Korean War right through to his most famous mission.”

Ryan Gosling stars in the recent Hollywood adaptation of the story of the first man on the moon.

“Venom. An alien symbiote that grants its host incredible spider-like powers and more - but at a terrible cost!

“Since his first full appearance in Amazing Spider-Man, Venom has not only become one of the deadliest foes of the wall-crawler, but also one of the most popular. Now, this volume brings together the very best tales from the Lethal Protector’s 30-plus year history, including covering some of their greatest and most pivotal battles!”

Villanelle: no tomorrow, by Luke Jennings

“In a hotel room in Venice, where she’s just completed a routine assassination, Villanelle receives a late-night call. Eve Polastri has discovered that a senior MI5 officer is in the pay of the Twelve, and is about to debrief him. As Eve interrogates her subject, desperately trying to fit the pieces of the puzzle together, Villanelle moves in for the kill.

“The duel between the two women intensifies, as does their mutual obsession, and when the action moves from the high passes of the Tyrol to the heart of Russia, Eve finally begins to unwrap the enigma of her adversary’s true identity.”

The Wife, by Meg Wolitzer

A woman in the shadow of her Nobel Prize winning husband knows his darkest secret. Will she tell? Glenn Close and Jonathan Pryce star in the film adaptation.

“Winston Churchill dominates our view of the history of Britain in the twentieth century - the brash, brave and ambitious young aristocrat who sought out danger in late Victorian wars, the mercurial First Lord of the Admiralty who was responsible for the Dardanelles disaster in 1915, the Home Secretary who crushed the General Strike in 1926, the Colonial Secretary who rode with T.E. Lawrence and Gertrude Bell at the Pyramids, the Chancellor who took the country back to the Gold Standard and then spent more than ten years in the political wilderness - and who, finally, was summoned to save his country in 1940.”

“Drawn in by the reputation of the islands, an English family move to the area, eager to give their autistic son a better life. But when a young nanny’s body is found hanging in the barn of their home, rumours of her affair with the husband begin to spread like wild fire. With suspicion raining down on the family, DI Jimmy Perez is called in to investigate, knowing that it will mean the return to the islands of his on-off lover and boss Willow Reeves, who will run the case.

“Perez is facing the most disturbing investigation of his career. Is he ready for what is to come?”

Final novel by Ann Cleeves in her fine Shetland series. We already have a sizeable waiting list for this one.

This is a slightly strange one. It is an Ian Rankin Rebus but it is a play which was created by the author for a touring production.

“After twenty-four novels, a career in the police, and a retirement in which he refuses to let go of his past life, former detective John Rebus now finds himself adapted for the stage.

“He might not be as young as he was, but the detective instincts never leave you. Rebus is embroiled in an old mystery, a cold case that will keep him - and the audience - guessing until the end. The question Rebus may not have an answer for, though, is whether in this new Edinburgh, a city which has moved on from his heyday, he still makes a difference or not.

Only to Sleep: a Philip Marlowe thriller, by Lawrence Osborne

Another legendary detective. Lawrence Osborne imagines Raymond Chandler’s 72 year old Philip Marlowe in 1988 coming out of retirement for one last case. Lots of good reviews for this one.

“The year is 1988. The place, Baja, California. Private Investigator Philip Marlowe - now in his 72nd year - has been living out his retirement in the terrace bar of the La Fonda hotel. Sipping margaritas, playing cards, his silver-tipped cane at the ready. When in saunter two men dressed like undertakers. With a case that has his name written all over it.

“At last Marlowe is back where he belongs. His mission is to investigate Donald Zinn - supposedly drowned off his yacht, leaving a much younger and now very rich wife. Marlowe’s speciality. But is Zinn actually alive? Are the pair living off the spoils?”