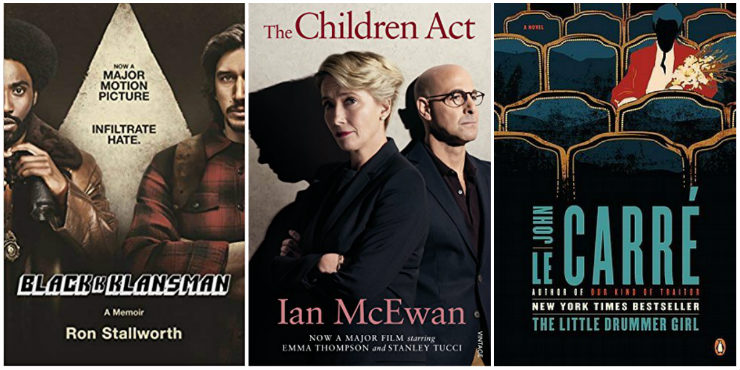 Cormoran Strike returns in JK Rowling’s fourth outing for the private eye. We have a long waiting list for this one.

“When Billy, a troubled young man, comes to private eye Cormoran Strike’s office to ask for his help investigating a crime he thinks he witnessed as a child, Strike is left deeply unsettled. While Billy is obviously mentally distressed, and cannot remember many concrete details, there is something sincere about him and his story. But before Strike can question him further, Billy bolts from his office in a panic.

“Trying to get to the bottom of Billy’s story, Strike and Robin Ellacott - once his assistant, now a partner in the agency - set off on a twisting trail that leads them through the backstreets of London, into a secretive inner sanctum within Parliament, and to a beautiful but sinister manor house deep in the countryside.”

“Charlie, a brilliant and beautiful young actress, is lured into ‘the theatre of the real’ by an Israeli intelligence officer. Forced to play her ultimate role, she is plunged into a deceptive and delicate trap set to ensnare an elusive Palestinian terrorist.”

“Harry Rawlins had been masterminding robberies for 20 years. The hijack of a security van would bring the gang thousands, but the job went wrong and Harry and his team were killed.

“Harry’s widow, Dolly, had three options. She could hand over Harry’s ledgers to the police. She could hand them over to a bunch of thugs. Or she could take the business over.”

You may remember the TV series in the 1980s starring Ann Mitchell as Dolly Rawlins. The story has now had the Hollywood treatment as Steve McQueen’s latest project. The cast includes Viola Davis and Daniel Kaluuya.

Angie Thomas’s novel about a young black girl who witnesses the police killing her friend has been a young adult bestseller. The film version will be in cinemas later this month.

Read Emily’s review of The Hate U Give →

A Boy in the Water, by Tom Gregory

“Eltham, South London. 1984: the warm fug of the swimming pool and the slow splashing of a boy learning to swim but not yet wanting to take his foot off the bottom.

“Fast-forward four years. Photographers and family wait on the shingle beach as a boy in a bright orange hat and grease-smeared goggles swims the last few metres from France to England. He has been in the water for twelve agonising hours, encouraged at each stroke by his coach, John Bullet, who has become a second father.

“This is the story of a remarkable friendship between a coach and a boy, and a love letter to the intensity and freedom of childhood.”

The Children Act, by Ian McEwan

This has been made into a major film starring Emma Thompson and Stanley Tucci.

“Fiona Maye is a respected High Court judge, renowned for her exactitude and calm professionalism. But when her husband of 30 years standing shocks her with an unreasonable request, she finds her life in crisis.

“At precisely the same time, she is ordered to try a new case. It is an urgent matter of life and death, bringing science and religion into direct conflict - and at its centre is a beautiful adolescent boy with the whole of his life ahead of him. Exactly the kind of case where a small error of judgement might have grave and lasting consequences.”

ITV have made the latest adaptation of Thackeray’s novel. Olivia Cooke plays the manipulative heroine.

“Becky Sharp is a poor orphan when she first makes friends with the lovely Amelia Sedley at Miss Pinkerton’s Academy for Young Ladies. She may not have the natural advantages of her companion but she more than makes up for it with her wit, charm, deviousness and determination to make a success of herself whatever the cost.”

This is getting rave reviews everywhere.

“When her city falls to the Greeks, Briseis’s old life is shattered. She is transformed from queen to captive, from free woman to slave, awarded to the god-like warrior Achilles as a prize of war. And she’s not alone. On the same day, and on many others in the course of a long and bitter war, innumerable women have been wrested from their homes and flung to the fighters.

“The Trojan War is known as a man’s story: a quarrel between men over a woman, stolen from her home and spirited across the sea. But what of the other women in this story, silenced by history? What words did they speak when alone with each other, in the laundry, at the loom, when laying out the dead?”

The Little Stranger, by Sarah Waters

Another novel to transfer to film. This has been adapted by the director of Room and stars Domhnall Gleeson and Ruth Wilson.

“In a dusty post-war summer in rural Warwickshire, a doctor is called to a patient at Hundreds Hall. Home to the Ayres family for over two centuries, the Georgian house, once grand and handsome, is now in decline. But are the Ayres haunted by something more sinister than a dying way of life?”

Black Klansman: race, hate, and the undercover investigation of a lifetime, by Ron Stallworth

Spike Lee’s latest film is based on the true story of two officers, one black, who infiltrated the Ku Klux Klan in the early 1970s.

“When Ron Stallworth, the first black detective in the history of the Colorado Springs Police Department, comes across a classified ad in the local paper asking for all those interested in joining the Ku Klux Klan to contact a P.O. box, Detective Stallworth does his job and responds with interest, using his real name while posing as a white man. He figures he’ll receive a few brochures in the mail, and learn more about a growing terrorist threat in his community. A few weeks later the office phone rings, and the caller asks Ron a question he thought he’d never have to answer, ‘Would you like to join our cause?’

“This is 1978, and the KKK is on the rise in the United States. Ron answers the caller’s question that night with a yes, launching what is surely one of the most audacious, and incredible undercover investigations in history.”

This was published in 2014, but it was recently chosen as a Radio 4 Extra book read by Sophie Thompson.

“It is wash-day for the housemaids at Longbourn House, and Sarah’s hands are chapped and bleeding. Domestic life below stairs, ruled tenderly and forcefully by Mrs Hill the housekeeper, is about to be disturbed by the arrival of a new footman smelling of the sea, and bearing secrets. For in Georgian England, there is a world the young ladies in the drawing room will never know, a world of poverty, love, and brutal war.”