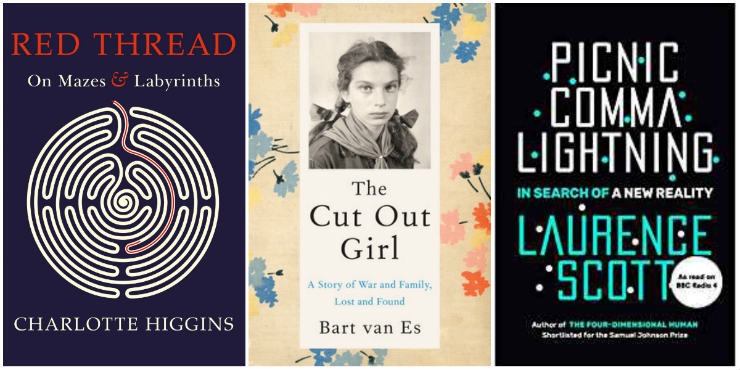 Red Thread: on mazes and labyrinths, by Charlotte Higgins

“The tale of how the hero Theseus killed the Minotaur, finding his way out of the labyrinth using Ariadne’s ball of red thread, is one of the most intriguing, suggestive and persistent of all myths, and the labyrinth - the beautiful, confounding and terrifying building created for the half-man, half-bull monster - is one of the foundational symbols of human ingenuity and artistry.

“Charlotte Higgins tracks the origins of the story of the labyrinth in the poems of Homer, Catullus, Virgil and Ovid, and with them builds an ingenious edifice of her own. She follows the idea of the labyrinth through the Cretan excavations of Sir Arthur Evans, the mysterious turf labyrinths of Northern Europe, the church labyrinths of medieval French cathedrals and the hedge mazes of Renaissance gardens.”

Picnic Comma Lightning: in search of the new reality, by Laurence Scott

Another Radio 4 Book of the Week. An exploration of what digital life is doing to the way we find meaning in the world.

“Pioneering thinker and award-winning author Laurence Scott provides a lively and accessible new philosophy for this epoch in Western civilisation, one that will change the way you see the world, and your place within it.”

A Discovery of Witches, by Deborah Harkness

The latest Sky 1 hit is a supernatural romance between a vampire (Matthew Goode) and a witch (Teresa Palmer).

“When Diana Bishop opens an alchemical manuscript, it’s an intrusion of magic into her life. Though she is a witch of impeccable lineage, the death of her parents while she was a child convinced her that human fear is more potent than witchcraft. Now Diana has exposed herself to a world she’s kept at bay for years.”

The graphic novel of the latest superhero film starring Paul Rudd in the lead role.

Ctrl Alt Del: how politics and the media crashed our democracy, by Tom Baldwin

Ctrl Alt Del has been much reviewed and much discussed. Interviewing everyone from Tony Blair to Michael Gove, top journalists to Russian bloggers, and tech giant execs to online activists, Tom Baldwin describes a vicious battle for control of the news agenda, at the expense of public trust and the value of truth.

The Cut Out Girl: a story of war and family, lost and found, by Bart Van Es

Another Radio 4 Book of the Week.

“The last time Lien saw her parents was in the Hague when she was collected at the door by a stranger and taken to a city far away to be hidden from the Nazis. She was raised by her foster family as one of their own, but a falling out well after the war meant they were no longer in touch. What was her side of the story, Bart van Es - a grandson of the couple who looked after Lien - wondered? What really happened during the war, and after?

“So began an investigation that would consume and transform both Bart van Es’s life and Lien’s. Lien was now in her 80s and living in Amsterdam. Reluctantly, she agreed to meet him, and eventually they struck up a remarkable friendship.”

North Korea is never far from the headlines. In this new book concentrating mainly on the architecture of the country, Guardian journalist and photographer Oliver Wainwright takes us behind closed doors in the world’s most secretive nation.

Drive your Plow over the Bones of the Dead, by Olga Tokarczuk & Antonia Lloyd-Jones (trans.)

“The novel takes place in a remote village in south-west Poland where Janina, an eccentric woman in her 60s, describes the events surrounding the disappearance of her two dogs. When members of a local hunting club are subsequently found murdered, she becomes involved in the investigation.

“By no means a conventional crime story, this novel offers some thought-provoking ideas on our perceptions of madness, social injustice against people who are marginalised, animal rights, the hypocrisy of traditional religion, and belief in predestination.”

Olga Tokarczuk recently became the first Polish writer to win the Man Booker International prize, awarded to the best work of translated fiction from anywhere in the world, for her book Flights. Olga will be appearing at Heffers in Cambridge on 17th October.