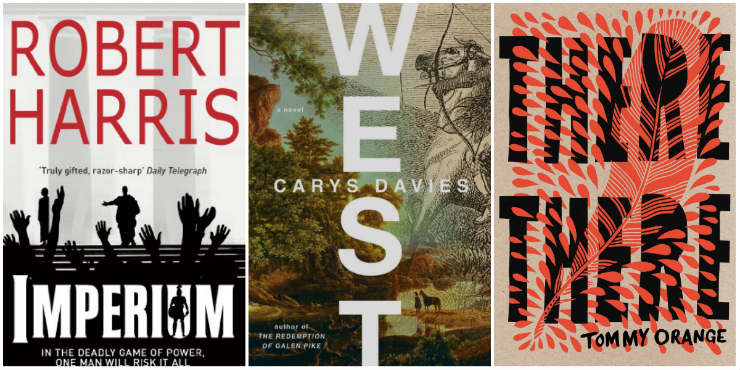 The Bookshop, by Penelope Fitzgerald

The Bookshop has local interest as it was inspired by Fitzgerald’s own experiences working in a bookshop in Southwold. It is about Florence, who opens a bookshop in the fictional town of Hardborough against local opposition. It was shortlisted for the 1978 Man Booker Prize and the forthcoming film stars Emily Mortimer and Bill Nighy.

“When two young girls are abducted and killed in Wind Gap, Camille Preaker is sent to her home town by Chicago’s ‘Daily Post’ to report on the crimes. Long haunted by a childhood tragedy and estranged from her mother, Camille struggles to maintain her hard-won mental stability.”

This is now a mini series on Sky Atlantic starring Amy Adams.

There There, by Tommy Orange

“Jacquie Red Feather and her sister Opal grew up together, relying on each other during their unsettled childhood. As adults they were driven apart, but Jacquie is newly sober and trying to make it back to the family she left behind. That’s why she is there.

“Dene is there because he has been collecting stories to honour his uncle’s death. Edwin is looking for his true father. Opal came to watch her boy Orvil dance. All of them are connected by bonds they may not yet understand. All of them are there for the cultural celebration that is the Big Oakland Powwow. But Tony Loneman is also there. And Tony has come to the Powwow with darker intentions.”

This debut novel about American Indians in California has been a huge success in the US.

Simon’s performance at July’s British Summer Time festival will be his final British show before he retires from the stage. His last album was Stranger to Stranger (2006).

Joan Weigall Lindsay’s 1968 is now a classic and the subject of a BBC Drama starring Natalie Dormer. If you prefer the original, we also have Peter Weir’s 1975 film.

“It was a cloudless summer day in the year 1900. Everyone at Appleyard College for Young Ladies agreed it was just right for a picnic at Hanging Rock. After lunch, a group of three of the girls climbed into the blaze of the afternoon sun, pressing on through the scrub into the shadows of Hanging Rock. Further, higher, till at last they disappeared. They never returned.”

Damaged Goods: the inside story of Sir Philip Green, the collapse of BHS and the death of the high street, by Oliver Shah

Warts-and-all story by the City editor of the Sunday Times.

“In March 2015, British businessman and the chairman of Arcadia Group Sir Philip Green sold BHS for £1 to Retail Acquisitions, owned by Dominic Chappell, a serial bankrupt who filed BHS for administration shortly after. By April 2016, BHS had debts of £1.3bn, including a pensions deficit of £571m. This title follows Green’s journey to the big time, the sale of BHS and the subsequent investigation that concluded with Green paying £363m to the Pensions Regulator.”

We are not expecting the DVD until September but you can catch the original series on BBC1 in July. When this was shown on BBC Wales earlier this year it became iPlayer’s most popular non-network show ever simply through word of mouth. Eve Myles stars as a woman whose husband vanishes unexpectedly.

I’m not sure how best to describe this, but it was 25 years in the writing and is said to be a love story, a crime thriller and a sci-fi epic in one. It originally came in three volumes in the original Icelandic, but they all come at once for UK readers.

“Jósef Loewe enters the world as a lump of clay - carried in a hatbox by his Jewish father Leo, a fugitive in WWII Germany. Taking refuge in a small-town guesthouse, Leo discovers a kindred spirit in the young woman who nurses him back to health and together they shape the clay into a baby.

“But en route to safety in Iceland, he is robbed of the ring needed to bring the child to life. It is not until 1962 that Jósef can be ‘born’, only to grow up with a rare disease. 53 years on, it leads him into the hands of a power-hungry Icelandic geneticist, just when science and politics are threatening to lead us all down a dark, dangerous road.”

“Ancient Rome teems with ambitious and ruthless men. None is more brilliant than Marcus Cicero. A rising young lawyer, backed by a shrewd wife, he decides to gamble everything on one of the most dramatic courtroom battles of all time. Win it, and he could win control of Rome itself. Lose it, and he is finished for ever.”

This has already been picked by some experts as an early contender for the next Man Booker Prize.

“When Cy Bellman, American settler and widowed father of Bess, reads in the newspaper that huge ancient bones have been discovered in a Kentucky swamp, he leaves his small Pennsylvania farm and young daughter to find out if the rumours are true: that the giant monsters are still alive, and roam the uncharted wilderness beyond the Mississippi River.”

John Coltrane - Both Directions at Once: the lost album - CD

Previously unreleased and ‘lost’ 1963 set from Rudy Van Gelder’s studio which has caused a stir in the jazz world.