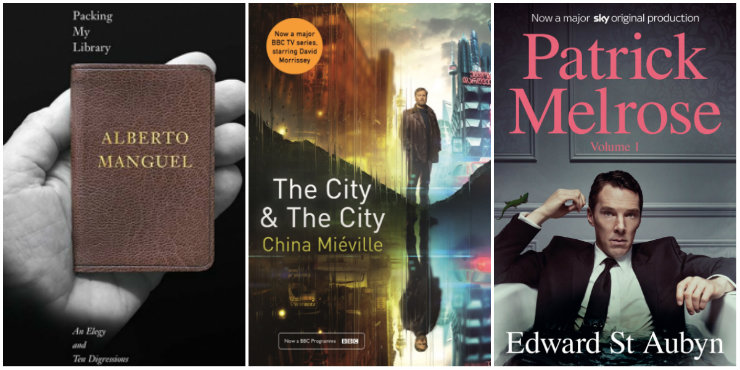 Packing My Library: an elegy and ten digressions, by Alberto Manguel

“In June 2015 Alberto Manguel prepared to leave his centuries-old village home in France’s Loire Valley and reestablish himself in a one-bedroom apartment on Manhattan’s Upper West Side. Packing up his enormous, 35,000-volume personal library, choosing which books to keep, store, or cast out, Manguel found himself in deep reverie on the nature of relationships between books and readers, books and collectors, order and disorder, memory and reading.

“In this poignant and personal re-evaluation of his life as a reader, the author illuminates the highly personal art of reading and affirms the vital role of public libraries.”

“Moving from Provence to New York to Gloucestershire, from the savageries of a childhood with a cruel father and an alcoholic mother to an adulthood fraught with addiction, Patrick Melrose is on a mission to escape himself. But the drugs don’t make him forget his past, and the glittering parties offer him no redemption.”

This is highly beloved of book groups. It has fallen slightly out of fashion in recent years but the new film starring Lily James should give it another lease of life.

“It’s January, 1946, and writer Juliet Ashton sits at her desk, vainly seeking a subject for her next book. Out of the blue, she receives a letter from one Dawsey Adams of Guernsey - by chance, he’s acquired a secondhand book that once belonged to Juliet - and, spurred on by their mutual love of Charles Lamb, they begin a correspondence.”

The City & The City, by China Miéville

“When the body of a murdered woman is found in the extraordinary, decaying city of Beszel, somewhere at the edge of Europe, it looks like a routine case for Inspector Tyador Borlú of the Extreme Crime Squad.

“But as he probes, the evidence begins to point to conspiracies far stranger, and more deadly, than anything he could have imagined. Soon his work puts him and those he cares for in danger. Borlú must travel to the only metropolis on Earth as strange as his own, across a border like no other.”

2018 is a huge year for filmmaker and artist Tacita Dean. Uniquely, the National Gallery, the National Portrait Gallery and the Royal Academy of Arts will all host major exhibitions of her work.

“Each will provide an encounter with the filmmaker’s work through a different lens. This book brings together works from all three exhibitions - both new and retrospective - with words by leading novelists and thinkers who provide a unique insight into Dean’s chosen genres: landscape, portrait and still-life.”

Kiss Me First, by Lottie Moggach

This is now a major series on Channel 4.

“Leila has never met Tess, but she knows more about Tess than anyone in the world. Tess has never met Leila, but she is about to trust Leila with her life. One of them has never really lived, the other can’t face living any more. Together they concoct the perfect lie, but how long will it survive?”

Civilisations: first contact / the cult of progress, by David Olusoga

We featured Mary Beard recently with her book from the BBC Civilisations series. This is the second book of the series, from historian David Olusoga.

“Kenneth Clark’s 1969 BBC series ‘Civilisation’ is perhaps the most celebrated documentary series ever made, except that it was entirely of its time: patrician to the exclusion of women and western to the exclusion of all other cultures. Spring 2018 sees an ambitious 10-part BBC re-make, presented by Britain’s foremost historians, embracing global civilisations and exploring different themes in the universal histories of art and culture.”