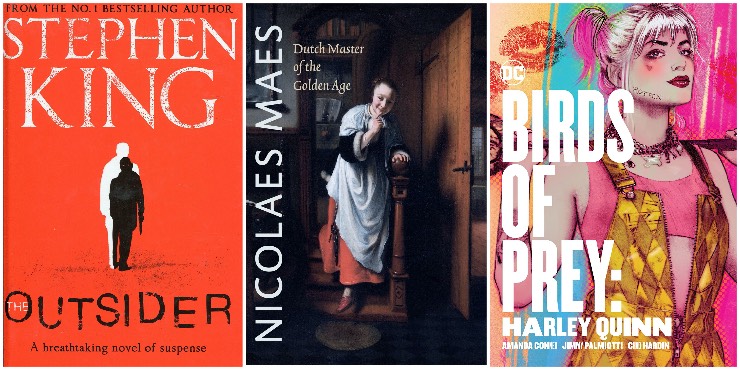 “When an 11-year-old boy is found murdered, forensic evidence and reliable eyewitnesses undeniably point to the town’s popular Little League coach. But the jailed suspect, arrested in a public spectacle, has an alibi, and further research convinces Detective Ralph Anderson that the coach was indeed out of town. So how can he have been in two places at the same time?”

Margot Robbie stars in the film.

“Harley Quinn sets off for a whole new adventure to New York City! What could possibly go wrong… well, almost everything!

“When Gotham’s favourite sociopath inherits a building on the famous Coney Island boardwalk, she feels right at home in the (literal) freakshow. Unfortunately, the legion of bounty hunters after the price on her head seem to know it, too. Who else but Harley Quinn could handle all that Brooklyn’s criminal underbelly has to offer - Russian spies, senior citizens and rival roller derby teams included - and still have time for a double chili dog!”

The Volunteer: the true story of the resistance hero who infiltrated Auschwitz, by Jack Fairweather

Since winning the Costa Book of the Year Prize, this has been in great demand.

“This is untold story of one of the greatest heroes of the Second World War.

“In the Summer of 1940, after the Nazi occupation of Poland, an underground operative called Witold Pilecki accepted a mission to uncover the fate of thousands of people being interred at a new concentration camp on the border of the Reich. His mission was to report on Nazi crimes and raise a secret army to stage an uprising. The name of the detention centre - Auschwitz. It was only after arriving at the camp that he started to discover the Nazis’ terrifying designs.

“Over the next two and half years, Witold forged an underground army that smuggled evidence of Nazi atrocities to the West, culminating in the mass murder of over a million Jews.”

The book of the play running at Wyndham’s Theatre, London.

“Vienna in 1900 was the most vibrant city in Europe, humming with artistic and intellectual excitement and a genius for enjoying life. A tenth of the population were Jews. A generation earlier, they had been granted full civil rights by the Emperor, Franz Josef. Consequently, hundreds of thousands had fled from the Pale of Settlement and the pogroms in the East and many found sanctuary in the crowded tenements of the old Jewish quarter, Leopoldstadt.

“Tom Stoppard’s new play is a passionate drama of love and endurance, an intimate play with an epic sweep, the story of a family who made good.”

“Steve McQueen (b. 1969) is one of the most important artists, filmmakers, and screenwriters working today. his book, which accompanies a major exhibition at Tate Modern, London, brings together all the video and film installations McQueen has made since 2000.”

The Pale Horse, by Agatha Christie

The book behind the recent BBC drama adaptation starring Rufus Sewell as a man whose name appears on a list found inside the shoe of a dead woman.

“When an elderly priest is murdered, the killer searches the victim so desperately that Father Gorman’s already ragged cassock is torn in the process. But just what was the killer looking for? And what had a dying woman confided to the priest on her death-bed, only hours earlier? Maybe the three women, rumoured to practise the ‘Dark Arts’, who run the Pale Horse public house can provide the answers. Or maybe the solution lies in the darker side of human nature.”

The National Gallery houses currently houses an exhibition by one of Rembrandt’s most talented pupils.

True History of the Kelly Gang, by Peter Carey

The Booker Prize winning novel about Ned Kelly has been brought to the big screen, starring Nicholas Hoult and Essie Davis.

“I lost my own father at 12 yr. of age and know what it is to be raised on lies and silence…

“To the authorities in pursuit of him, outlaw Ned Kelly is a horse thief, bank robber and police-killer. But to his fellow ordinary Australians, Kelly is their own Robin Hood. In a dazzling act of ventriloquism, Peter Carey brings the famous bushranger wildly and passionately to life.”