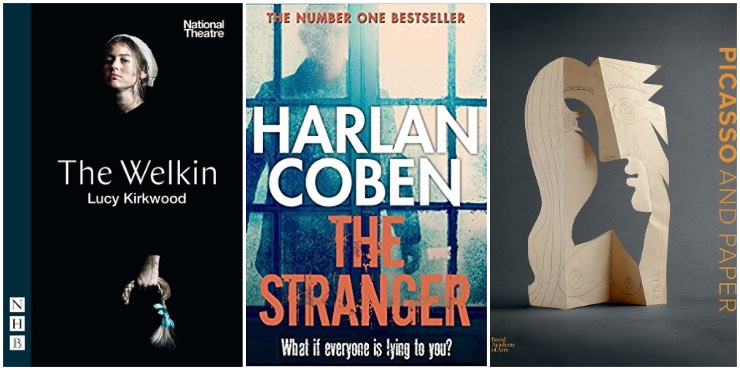 The book of the recent TV drama of the events of the Profumo Affair.

“In her own words, the life of the beautiful young model and dancer who helped to bring down the Tory government of Harold Macmillan - the ‘Profumo Affair’ remains the greatest political sex scandal in recent British history.

“Following Christine Keeler’s death in December 2017, it is now possible to update her book to include revelations that she did not wish to be published in her lifetime. The result is a revised and updated book containing material that has never been officially released, which really does lift the lid on just how far the Establishment will go to protect its own.”

The Welkin, by Lucy Kirkwood

“Rural Suffolk, 1759. As the country waits for Halley’s comet, Sally Poppy is sentenced to hang for a heinous murder. When she claims to be pregnant, a jury of 12 matrons are taken from their housework to decide whether she’s telling the truth, or simply trying to escape the noose. With only midwife Lizzy Luke prepared to defend the girl, and a mob baying for blood outside, the matrons wrestle with their new authority, and the devil in their midst.”

Little Women and Good Wives, by Louisa May Alcott

Classic title which has been made into a film with a star-studded cast.

“Life in the March household is full of adventures and accidents as the four very different March sisters follow their varying paths to adulthood, always maintaining the special bond between them. Sensible Meg, impetuous Jo, shy Beth and artistic Amy each have to confront different challenges as they grow up together.”

David Copperfield was recently filmed by Armando Iannucci, with locations including the Angel Hotel in Bury St Edmunds.

“Charles Dickens tells the life story of David Copperfield, from his birth in Suffolk, through the various struggles of his childhood, to his successful career as a novelist.”

The inspiration for film Jojo Rabbit.

“This extraordinary novel is seen through the eyes of Johannes, an avid member of the Hitler Youth in the 1940s. After he is severely injured in a raid, he discovers his parents are hiding a Jewish girl called Elsa behind a false wall in their large house in Vienna. His initial horror turns to interest, then love and obsession. After the disappearance of his parents, Johannes finds he is the only one aware of Elsa’s existence in the house, the only one responsible for her survival.

“Both manipulating and manipulated, Johannes dreads the end of the war: with it will come the prospect of losing Elsa and their relationship, which ranges through passion and obsession, dependence and indifference, love and hate.”

A recent Radio 4 Book at Bedtime.

“It’s 1959 and Harry Rabbit Angstrom, high school sports star turned MagiPeel Kitchen demonstrator, is going nowhere. His only escape is into the arms of his mistress or on a 1,000 mile drive, yet this only makes things worse.”

The Murders at White House Farm: Jeremy Bamber and the killing of his family: the definitive investigation, by Carol Ann Lee

The horrific killings are now the subject of an ITV drama.

“On 7th August 1985, Nevill and June Bamber, their daughter Sheila and her two young sons Nicholas and Daniel were discovered shot to death at White House Farm in Essex. The murder weapon was found on Sheila’s body; a Bible lay at her side. All the windows and doors of the farmhouse were secure, and the Bambers’ son, 24-year-old Jeremy, had alerted police after apparently receiving a phone call from his father, who told him Sheila had ‘gone berserk’ with the gun.

“It seemed a straightforward case of murder-suicide, but a dramatic turn of events was to disprove the police’s theory. In October 1986, Jeremy Bamber was convicted of killing his entire family in order to inherit his parents’ substantial estates. Carol Ann Lee brings clarity to a complex and emotive case.”

The book of the exhibition at the Royal Academy of Arts. 300 sparkling works spanning the artist’s 80 year career.

The Stranger, by Harlan Coben

“Adam and Corinne confront the shocking secret on which their marriage is built - leaving Adam wondering whether he ever truly knew Corinne at all.”

The book of the blockbuster exhibition at the British Museum.

“Troy is familiar to us from the timeless and epic tales of Homer’s Iliad and Virgil’s Aeneid. These have been retold over the centuries by writers from Chaucer to Shakespeare to Madeline Miller and Rick Riordan, and enacted by stars such as Elizabeth Taylor and Brad Pitt. But how much do we really know about the city of Troy; its storytellers, myth, actual location or legacy?

“In this richly illustrated book, the story of Troy is told through a new lens. It introduces the storytellers and classical artists inspired by the myths of Troy, then examines the tales themselves.”

The Shepherd’s Life: a tale of the Lake District, by James Rebanks

A January Radio 4 choice for Book of the Week.

Read Woodbridge Library Manager Helen’s review of The Shepherd’s Life: a tale of the Lake District →