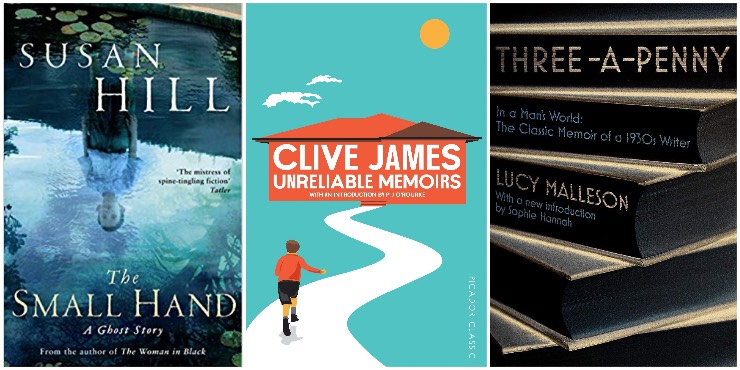 Edward Norton stars in the film of the book as a gumshoe with Tourettes who goes undercover to investigate the murder of his boss in 1950s New York.

“Lionel Essrog is Brooklyn’s very own self-appointed Human Freakshow, an orphan whose Tourette’s Disease drives him to bark, count, and rip apart our language in startling and original ways. Together with three veterans of the St Vincent’s Home for Boys, he works for mobster Frank Minna. But when Frank is fatally stabbed and his widow skips town, Lionel attempts to untangle the threads of the case.”

The Two Popes: Francis, Benedict and the decision that shook the world, by Anthony McCarten

Book behind the film and Netflix special starring Anthony Hopkins and Jonathan Pryce.

“In February 2013, a 600-year-old tradition was shattered: the conservative Pope Benedict XVI announced his resignation. Reeling from the news, the College of Cardinals rushed to Rome to congregate in the Sistine Chapel to pick his successor. Their unlikely choice was Francis, the first non-European pope in 1,200 years, a one time tango club bouncer, a passionate football fan and a man with the common touch. This is a fascinating and revealing tale of two very different men whose destinies converge.”

Touching the Void, by Joe Simpson

This classic mountaineering tale is now a play at the Duke of York’s Theatre in London.

“Joe Simpson and his partner, Simon Yates, tackled the unclimbed West Face of the remote 21,000 ft Siula Grande in the Peruvian Andes. In June 1985 they achieved the summit before disaster struck. In Touching the Void, they tell their story.”

In the first instalment of the wonderful memoirs by the late Clive James:

“We follow the young Clive on his journey from boyhood to the cusp of manhood, when his days of wearing short trousers are finally behind him. Battling with school, girls, various relatives and an overwhelming desire to be a superhero, Clive’s adventures growing up in the suburbs of post-war Sydney are hair-raising, uproarious and almost too good to be true.”

Stormzy - Heavy is the Head (CD)

Stunning second album from Stormzy, who has established himself as one of the most powerful voices in British music.

The Small Hand: a ghost story, by Susan Hill

“Returning home from a client visit late one evening, Adam Snow takes a wrong turn and stumbles across the derelict old White House. Compelled by curiosity he decides to enter, only to be repelled when he feels the unmistakeable sensation of a small hand creeping onto his own. This is just the beginning of a series of odd experiences.”

This one has been getting stunning reviews.

“The visionary, fearless Lydia Davis presents a dazzling collection of essays on reading and writing, exploring the full scope of possibility within existing forms of literature and considering how we might challenge and reinvent these forms.

“Through Thomas Pynchon, Michel Leiris, Maurice Blanchot, Lucia Berlin, Joan Mitchell and others, the author considers her many creative influences. And, through these lenses, she returns to her own writing process, her relationship to language and the written word. Beautifully formed, thought-provoking, playful and illuminating, these pieces are a masterclass in reading and writing.”

The Five: the untold lives of the women killed by Jack the Ripper, by Hallie Rubenhold

Recent winner of the Baillie Gifford prize for Non-Fiction.

“Five devastating human stories and a dark and moving portrait of Victorian London - the untold lives of the women killed by Jack the Ripper.

“Polly, Annie, Elizabeth, Catherine, and Mary-Jane are famous for the same thing, though they never met. They came from Fleet Street, Knightsbridge, Wolverhampton, Sweden, and Wales. They wrote ballads, ran coffee houses, lived on country estates, they breathed ink-dust from printing presses and escaped people-traffickers. What they had in common was the year of their murders: 1888.

“For more than a century, newspapers have been keen to tell us that ‘the Ripper’ preyed on prostitutes. Not only is this untrue, as historian Hallie Rubenhold has discovered, it has prevented the real stories of these fascinating women from being told. Now Rubenhold finally sets the record straight, revealing a world not just of Dickens and Queen Victoria, but of poverty and homelessness.”

“Three-a-Penny describes what it is like to be a woman in a man’s world - about the ups and downs of earning a living as a writer in the 1920s and 30s.

“Lucy Malleson wrote over 70 crime novels and was part of what is often referred to as the Golden Age of crime writing. But in order to be published she used a male pseudonym, and successfully concealed her true identity for many years. From the poignancy of the First World War and its aftermath to the invitation to join the infamous Detection Club, this re-discovered classic gives a fascinating insight into what life was like as a woman living and working in a largely male world during and after the First World War.”

One of 2019’s outstanding books. This was a recent Radio 4 pick and adaptation starring Kenneth Branagh and Greta Scacchi.

“In April 1942, Hitler and Mussolini plan the huge offensive on the Eastern Front that will culminate in the greatest battle in human history. Hundreds of miles away, Pyotr Vavilov receives his call-up papers and spends a final night with his wife and children in the hut that is his home. As war approaches, the Shaposhnikov family gathers for a meal: despite her age, Alexandra will soon become a refugee; Tolya will enlist in the reserves; Vera, a nurse, will fall in love with a wounded pilot; and Viktor Shtrum will receive a letter from his doomed mother which will haunt him forever. The war will consume the lives of a huge cast of characters - lives which express Grossman’s grand themes of the nation and the individual, nature’s beauty and war’s cruelty, love and separation.”