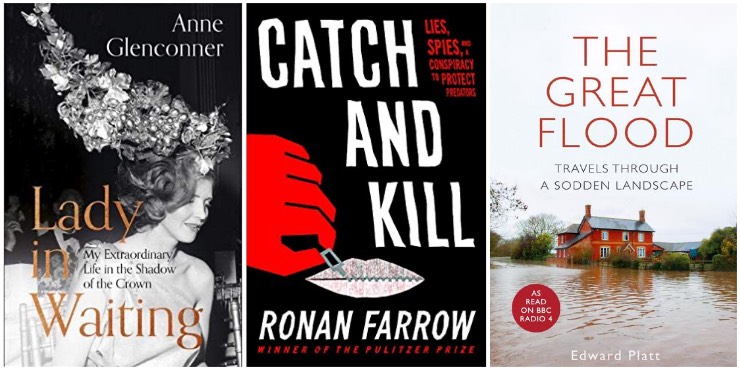 A Lady in Waiting: my extraordinary life in the shadow of the Crown, by Anne Glenconner

Hugely popular memoir. Hodder reprinted it six times in a fortnight and Lady Glenconner recently appeared on Graham Norton’s sofa alongside Olivia Colman and Helena Bonham Carter, who were discussing the new series of Netflix’s The Crown.

“From Maid of Honour at the Queen’s Coronation to Lady in Waiting to Princess Margaret, Lady Anne Glenconner is a unique witness to royal history, as well as an extraordinary survivor of a generation of aristocratic women trapped without inheritance and burdened with social expectations.

“She married the charismatic but highly volatile Colin Tennant, Lord Glenconner, who became the owner of Mustique. But beneath the glitz and glamour there has also lurked tragedy. On Lord Glenconner’s death in 2010 he left his fortune to a former employee. And of their five children, two grown-up sons died, while a third son had to be nursed back from a coma by Anne.

“In this book, she exposes what life was like in her gilded cage, revealing the role of her great friendship with Princess Margaret, and the freedom she can now finally enjoy in later life.”

The Good Liar, by Nicholas Searle

The book of the major film starring Helen Mirren and Ian McKellen.

“This is a life told back to front. This is a man who has lied all his life. Roy is a conman living in a small English town, about to pull off his final con. He is going to meet and woo a beautiful woman and slip away with her life savings. But who is the man behind the con? What has he had to do to survive a life of lies? And who has had to pay the price?”

Stephen King’s book follows Danny Torrance’s life after The Shining. The book has recently been made into a film starring Ewan McGregor.

“Following a childhood haunted by terrifying events at the Overlook Hotel, Danny Torrance has been drifting for decades. Finally, he settles into a job at a nursing home where he draws on his remnant ‘shining’ power to help people pass on.

“Then he meets Abra Stone, a young girl with the brightest ‘shining’ ever seen. But her gift is attracting a tribe of paranormals. They may look harmless, old and devoted to their Recreational Vehicles, but The True Knot live off the ‘steam’ that children like Abra produce. Now Dan must confront his old demons as he battles for Abra’s soul and survival.”

Catch and Kill: lies, spies and a conspiracy to protect predators, by Ronan Farrow

“In a dramatic account of violence and espionage, Pulitzer Prize-winning investigative reporter Ronan Farrow exposes serial abusers and a cabal of powerful interests hell-bent on covering up the truth, at any cost.

“In 2017, a routine network television investigation led Ronan Farrow to a story only whispered about: one of Hollywood’s most powerful producers was a predator, protected by fear, wealth, and a conspiracy of silence. As Farrow drew closer to the truth, shadowy operatives, from high-priced lawyers to elite war-hardened spies, mounted a secret campaign of intimidation, threatening his career, following his every move and weaponising an account of abuse in his own family. All the while, Farrow and his producer faced a degree of resistance that could not be explained - until now. And a trail of clues revealed corruption and cover-ups from Hollywood, to Washington, and beyond.”

The Great Flood: travels through a sodden landscape, by Edward Platt

Radio 4 Book of the Week choice.

“Flooding has always threatened the rainy, wind-swept islands of the United Kingdom, but it is becoming more frequent and more severe. Combining travel writing and reportage with readings of history, literature and myth, Edward Platt explores the way floods have shaped the physical landscape of Britain and left their mark on its inhabitants.

“During the course of two years, which coincided with the record-breaking floods of the winter of 2013–14, Platt travelled around the country, visiting places that had flooded and meeting the people affected. He visited flooded villages and towns and expanses of marsh and Fen threatened by the winter storms, and travelled along the edge of the drowned plain that used to connect Britain to continental Europe. He met people struggling to stop their houses falling into the sea and others whose homes had been engulfed. He investigated disasters natural and man-made, and heard about the conflicting attitudes towards those charged with preventing them.

“The Great Flood dramatises the experience of being flooded and considers what will happen as the planet warms and the waters rise, illuminating the reality behind the statistics and headlines that we all too often ignore.”

The Man in the Red Coat, by Julian Barnes

“In the summer of 1885, three Frenchmen arrived in London for a few days’ shopping. One was a Prince, one was a Count, and the third was a commoner with an Italian name, who four years earlier had been the subject of one of John Singer Sargent’s greatest portraits.

“The three men’s lives play out against the backdrop of the Belle Epoque in Paris. The beautiful age of glamour and pleasure more often showed its ugly side: hysterical, narcissistic, decadent and violent, a time of rampant prejudice and blood-and-soil nativism, with more parallels to our own age than we might imagine.

“Our guide through this world is Samuel Pozzi, society doctor, pioneer gynaecologist, and free-thinker, a rational and scientific man with a famously complicated private life. The Man in the Red Coat is at once a fresh and original portrait of the French Belle Epoque and a life of a man ahead of his time.”

“In Home Work, the enchanting Julie Andrews describes her years in Hollywood - from the incredible highs to the challenging lows. Not only does she detail her work in now-classic films and her collaborations with giants of cinema and television; she also unveils her personal story of adjusting to a new and often daunting world, dealing with the demands of unimaginable success, being a new mother, moving on from her first marriage, embracing two stepchildren, adopting two more children, and falling in love with the brilliant and mercurial Blake Edwards.”

A Cheesemonger’s History of the British Isles, by Ned Palmer

This has been picked up by most of the papers and well reviewed. Includes coverage of the notoriously bad Suffolk cheeses in the seventeenth century.

“The story of the British Isles, their people and their cheeses, from prehistoric Celts to postmodern foodies, and explains how key moments and major currents in our history are embodied within our food. The book also shows how to find the best cheeses today, looks at how they are made and introduces the eccentric cast of characters who make them.”

May at 10, by Anthony Seldon & Raymond Newell

“Theresa May has presided over the most dramatic and historic peacetime premiership for a century. May at 10 tells the compelling inside story of the most turbulent period in modern British politics for 100 years.”

Accompanies the retrospective for the late Korean artist at the Tate Modern.

“The first rigorous positioning of Paik as a key figure in the twentieth-century avant-garde movement, this book reveals the striking breadth of this pioneering artist’s oeuvre, featuring TV-screen sculptures, video works and all-encompassing installations, such as the dazzling Sistine Chapel 1993.”

The duo behind The Greatest Showman brought their hit Broadway musical to the Noel Coward Theatre last month.