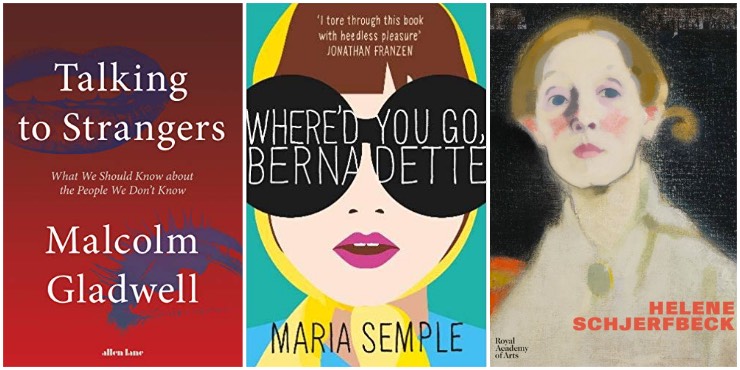 The Goldfinch, by Donna Tartt

Now a major film starring Ansel Elgort. The general consensus has been that the film does not do the book justice. Why not judge for yourself?

“Aged 13, Theo Decker, son of a devoted mother and a reckless, largely absent father, survives an accident that otherwise tears his life apart. Alone and rudderless in New York, he is taken in by the family of a wealthy friend. He is tormented by an unbearable longing for his mother, and down the years clings to one thing that reminds him of her: a small, strangely captivating painting that ultimately draws him into the criminal underworld.

“As he grows up, Theo learns to glide between the drawing rooms of the rich and the dusty antiques store where he works. He is alienated and in love and his talisman, the painting, places him at the centre of a narrowing, ever more dangerous circle.”

“Joker tells the story of one very dark night in Gotham City - a harrowing night of revenge, murder and manic crime as only the Joker can deliver it, as he brutally takes back his stolen assets from The Penguin, The Riddler, Two-Face, Killer Croc and others.”

Get Happy: the life of Judy Garland, by Gerald Clarke

Defending the Guilty: truth and lies in the criminal courtroom, by Alex McBride

Now a BBC series starring Will Sharpe and Katherine Parkinson.

“Every day, like every criminal barrister in this country, Alex McBride stands up in court and, with nothing but his hard-won legal expertise, attempts to save people from criminal conviction and even a lifetime behind bars. In this memoir he takes us behind the scenes of Britain’s criminal justice system.”

“How did Margaret Thatcher change and divide Britain? How did her model of combative female leadership help shape the way we live now? How did the woman who won the Cold War and three general elections in succession find herself pushed out by her own MPs? Charles Moore’s third volume, based on unique access to Margaret Thatcher herself, her papers and her closest associates, tells the story of her last period in office, her combative retirement and the controversy that surrounded her even in death.”

The Spy Who Tried to Stop a War, by Marcia & Thomas Mitchell

“In January 2003, 28-year-old GCHQ translator Katharine Gun received an email from the US National Security Agency that would turn her world upside down. The message requested Katharine’s assistance in co-ordinating an illegal US-UK spy operation which would secure UN authorisation for the Iraq invasion. Horrified, she decided to leak the information to the British press. Katharine’s decision would change her life forever, as she was arrested under the Official Secrets Act whilst becoming a cause célèbre for political activists.

“Official Secrets is the definitive account of a whistleblower case that reads like a thriller, and will ask you the same question that was asked of Katharine that cold January day - where do your true loyalties lie?”

The book behind Official Secrets, starring Keira Knightley as Katharine.

“Bernadette Fox is notorious. To Elgie Branch, a Microsoft wunderkind, she’s his hilarious, volatile, talented, troubled wife. To fellow mothers at the school gate, she’s a menace. To design experts, she’s a revolutionary architect. And to 15-year-old Bee, she is a best friend and, quite simply, mum. Then Bernadette disappears, and Bee’s search for her mother reveals an extraordinary woman trying to find her place in an absurd world.”

The Secret Commonwealth, by Philip Pullman

One of the most eagerly awaited titles of the year, and not just for young adults.

“The second volume of Philip Pullman’s The Book of Dust sees Lyra, now twenty years old, and her daemon Pantalaimon, forced to navigate their relationship in a way they could never have imagined, and drawn into the complex and dangerous factions of a world that they had no idea existed. Pulled along on his own journey too is Malcolm; once a boy with a boat and a mission to save a baby from the flood, now a man with a strong sense of duty and a desire to do what is right.

“Theirs is a world at once familiar and extraordinary, and they must travel far beyond the edges of Oxford, across Europe and into Asia, in search for what is lost - a city haunted by daemons, a secret at the heart of a desert, and the mystery of the elusive Dust.”

A new study examining the life and work of Helene Schjerfbeck, the Finnish painter who influenced Bacon, Freud and Auerbach, to tie in with the overdue retrospective of her work at the Royal Academy.

Talking to Strangers: what we should know about the people we don’t know, by Malcolm Gladwell

“In July 2015, a young black woman named Sandra Bland was pulled over for a minor traffic violation in rural Texas. Minutes later she was arrested and jailed. Three days later, she committed suicide in her cell. What went wrong?

“Talking to Strangers is all about what happens when we encounter people we don’t know, why it often goes awry, and what it says about us. How do we make sense of the unfamiliar? Why are we so bad at judging someone, reading a face, or detecting a lie? Why do we so often fail to ‘get’ other people?

“Through a series of puzzles, encounters and misunderstandings, from little-known stories to infamous legal cases, Gladwell takes us on a journey through the unexpected. You will read about the spy who spent years undetected at the highest levels of the Pentagon, the man who saw through the fraudster Bernie Madoff, the suicide of the poet Sylvia Plath and the false conviction of Amanda Knox.”

“In 1964 Lucian Freud set his students at the Norwich College of Art an assignment: to paint naked self-portraits and to make them ‘revealing, telling, believable, really shameless’. It was advice that the artist was often to follow himself.

“Visceral, unflinching and often nude, Freud’s self-portraits give us an insight into the development of his style as a painter. The works provide the viewer with a constant reminder of the artist’s overwhelming presence, whether he is confronting the viewer directly or only present as a shadow or in a reflection.

“Essays by leading authorities - including those who knew him - explore Freud’s life and work, and analyse the importance of self-portraiture in his practice. An interview between the art historian Jasper Sharp and the actress Tilda Swinton completes the book.”