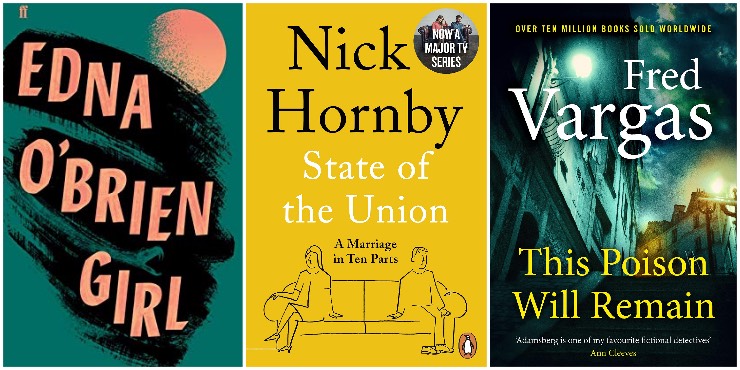 In the Woods, by Tana French

“When he was 12 years old, Adam Ryan went playing in the woods with his two friends. He never saw them again. Their bodies were never found, Adam himself was discovered with his back pressed against a tree and his shoes filled with blood. Now he is a detective working on the murder of a girl at the exact site of his childhood trauma.”

The Mountbattens, by Andrew Lownie

Revealing biography from one of the speakers at the Lavenham Literary Festival in November.

“A major figure behind his nephew Philip’s marriage to Queen Elizabeth II and instrumental in the royal family taking the Mountbatten name, Dickie Mountbatten’s career included being Supreme Allied Commander of South East Asia during World War Two and the last Viceroy of India. Once the richest woman in Britain and a playgirl who enjoyed numerous affairs, Edwina Mountbatten emerged from World War Two as a magnetic and talented charity worker loved around the world.

“From the prize-winning and bestselling historian, Andrew Lownie, comes a nuanced portrayal of two very unusual people and their complex marriage to mark the 40th anniversary of Lord Mountbatten’s assassination by the IRA.”

I Heard You Paint Houses: the biggest hit in Mob history, by Charles Brandt

This authoritative account of the disappearance of union leader Jimmy Hoffa has been adapted as The Irishman by Martin Scorsese and stars Robert De Niro, Al Pacino and Joe Pesci.

“On the evening of Saturday, of 19th of March 2011, D.S. Stephen Fulcher receives a life-changing call that thrusts him into a race against time to save missing 22-year-old Sian O’Callaghan, who was last seen at a nightclub in Swindon. Steve knows from experience that he has a small window of time to find Sian alive, but his hopes are quickly dashed when his investigation leads him to Christopher Halliwell.

“Following the investigation as it develops hour-by-hour, Steve’s gripping inside story of the cat-and-mouse situation that ensues shows how he hunted down Halliwell - his number-one suspect - which led him to the discovery of Sian’s body and another victim, Becky Godden-Edwards, who had been missing since 2002.”

This Poison Will Remain, by Fred Vargas & Sian Reynolds (trans.)

A recent Sunday Times Crime Book of the Month.

“When three elderly men are poisoned, apparently by spider bites, everyone assumes that the deaths are tragic accidents. But at police headquarters in Paris, Inspector Adamsberg begins to suspect that the case is far more complex than first appears.

“It isn’t long before Adamsberg is pursuing a series of rumours and allegations that take him to the south of France, and the shocking events that occurred at La Miséricorde orphanage, decades ago. A spate of serious injuries there was linked to bites from the same local species, the recluse spider. Adamsberg is convinced that, through the haunting crimes of the past, he can prove that the men were victims of an ingenious serial killer.”

Much-reviewed title by the great Irish writer about her harrowing visit to Nigeria.

“Captured, abducted and married into Boko Haram, the narrator of this story witnesses and suffers the horrors of a community of men governed by a brutal code of violence. Barely more than a girl herself, she must soon learn how to survive as a woman with a child of her own. Just as the world around her seems entirely consumed by madness, bound for hell, she is offered an escape of sorts - but only into another landscape of trials and terrors amidst the unforgiving wilds of northeastern Nigeria, through the forest and beyond; a place where her traumas are met with the blinkered judgement of a society in denial.

“How do we love in a world that has lost its moorings? How can we comprehend the barbarism of our enemies, and learn forgiveness for atrocities committed in the name of ideology?”

State of the Union: a marriage in ten parts, by Nick Hornby

The book behind the BBC2 series.

“Each week, Tom and Louise meet for a quick drink in the pub before they go to meet their marriage counsellor. Married for years and with two children, a recent incident has exposed the fault lines in their relationship in a way that Tom, for one, does not wish to think about. In the ten minutes in the pub they talk about the agenda for the session, what they talked about last week, what they will definitely not talk about with the counsellor, and how much better off they are than the couple whose counselling slot immediately precedes their own.

“Over the ten weeks that follow Tom and Louise begin to wonder: what if marriage is like a computer? When you take it apart to see how it works you might just be left with a million pieces you can’t put back together.”

IT, by Stephen King

The horror classic behind the films and recent Radio 4 Book of the Week.

“To the children, the town was their whole world. To the adults, knowing better, Derry, Maine, was just their home town: familiar, well-ordered for the most part. A good place to live. It is the children who see - and feel - what makes the small town of Derry so horribly different. In the storm drains, in the sewers, IT lurks, taking on the shape of every nightmare, each one’s deepest dread.”

The Remarkable Life of the Skin: an intimate journey across our surface, by Monty Lyman

“How does our diet affect our skin? What makes the skin age? And why can’t we tickle ourselves?

“Providing a cover for our delicate and intricate bodies, the skin is our largest and fastest growing organ. We see it, touch it and live in it every day. It’s a habitat for a mesmerisingly complex world of micro-organisms and physical functions that are vital to our health and our survival. It’s also one of the first things people see about us and is crucial to our sense of identity. And yet how much do we really know about it?

“Through the lenses of science, sociology and history, Dr Monty Lyman leads us on a journey across our most underrated and unexplored organ and reveals how the skin is far stranger and more complex than you’ve ever imagined.”

Different Every Time: the authorised biography of Rovert Wyatt, by Marcus O’Dair

Published in 2014, this was one of Radio 4’s September choices for Book of the Week.

“Robert Wyatt started out as the drummer and singer for Soft Machine, who shared a residency at Middle Earth with the Pink Floyd and toured America with Jimi Hendrix. He brought a Bohemian and jazz outlook to the 1960s rock scene, having honed his drumming skills in a shed at the end of Robert Graves’s garden in Mallorca.

“His life took an abrupt turn after he fell from a fourth floor window at a party and was paralysed from the waist down. He reinvented himself as a singer and composer with the extraordinary album Rock Bottom that has brought him a loyal following not just in Britain but in France, Italy and Germany.”

Accompanies the major exhibition at the Tate Britain running from 11 September 2018 - 2 February 2019.

“Accompanying the first major survey of William Blake’s work to be held since 2000, this book presents a comprehensive overview of his work as a printmaker, poet and painter, foregrounding his relationship with the art world of his time and telling the stories behind some of the most iconic images in the history of British art.”

Produced to accompany the Royal Academy’s major show this autumn.

“The sculptor Sir Antony Gormley OBE RA has become a household name, thanks to prominent public installations and major solo shows. Awarded the Turner Prize in 1994, he was knighted in 2014. From ‘The Angel of the North’ (1998) to the hundred cast-iron life-size human figures that populate Crosby Beach in Liverpool, his works often explore the human body and its relationship to the space it inhabits.

“In this authoritative survey, the leading scientist and writer on cosmology Priyamvada Natarajan explores the role of space and light in Gormley’s work. Michael Newman places Gormley within the British sculptural tradition, while Jeanette Winterson OBE adds her personal response to Gormley’s sculpture. Martin Caiger-Smith introduces this body of work, exploring the roots of Gormley’s practice, and the role that public sculpture can play in the twenty-first century.”