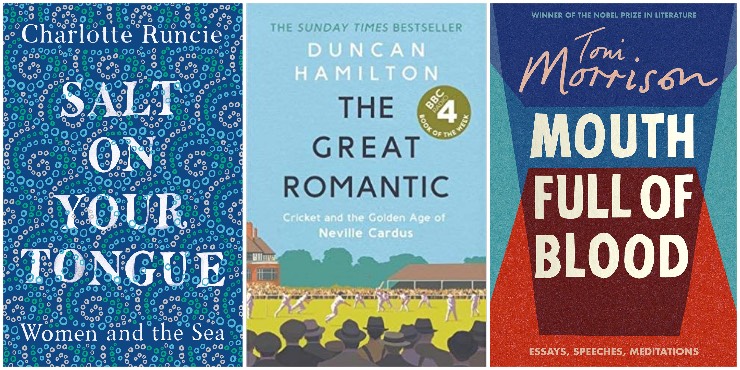 Just What Kind of Mother Are You?, by Paula Daly

“She’s gone and it’s your fault. You were supposed to be watching your best friend’s daughter, and now she’s missing. But you know that she’s not just missing - she’s been taken. Because Lucinda is the second girl to be abducted within a fortnight. And the first was found on a busy high street, naked and traumatised. No one expects the next to be so lucky.

“You’re going to have to figure this out - who did it. Because if you don’t, then Lucinda will be next. And you’ll never forgive yourself.”

Salt On Your Tongue: women and the sea, by Charlotte Runcie

A recent Radio 4 Book of the week. Charlotte Runcie shows how the sea has inspired, fascinated and terrified us and explores what the sea has meant to women in particular through the ages.

This Booker-longlisted novel has been receiving stellar reviews.

“It’s late one night at the Spanish port of Algeciras and two fading Irish gangsters are waiting on the boat from Tangier. A lover has been lost, a daughter has gone missing, their world has come asunder - can it be put together again?

“Night Boat to Tangier is a novel drenched in sex and death and narcotics, in sudden violence and old magic, but it is obsessed, above all, with the mysteries of love.”

Warts and all biography of the philosopher and novelist.

“‘One is not born, but rather becomes, a woman’, wrote Simone de Beauvoir. This is a woman who was also to become a philosopher, a novelist, an existentialist, and a feminist icon. Her novels won prestigious literary prizes and The Second Sex transformed the way we think about sex and gender. She was also the long-term lover of Jean-Paul Sartre, but it was to film-maker Claude Lanzmann that she wrote ‘You are my destiny, my eternity, my life.’ in letters which only came to light in 2018.

“Kate Kirkpatrick draws on previously unavailable diaries and letters, including those written to Lanzmann. Why did she lie about her relationship with Sartre so often, or claim not to be a philosopher? Perhaps with so much that’s new here we’ll get a little closer to understanding who Beauvoir really was.”

The Great Romantic: cricket and the golden age of Neville Cardus, by Duncan Hamilton

“Neville Cardus described how one majestic stroke-maker ‘made music’ and ‘spread beauty’ with his bat. Between two world wars, he became the laureate of cricket by doing the same with words.

“In The Great Romantic, award-winning author Duncan Hamilton demonstrates how Cardus changed sports journalism for ever. While popularising cricket - while appealing, in Cardus’ words to people who ‘didn’t know a leg-break from the pavilion cat at Lord’s’- he became a star in his own right with exquisite phrase-making, disdain for statistics and a penchant for literary and musical allusions.

“Among those who venerated Cardus were PG Wodehouse, John Arlott, Harold Pinter, JB Priestley and Don Bradman. However, behind the rhapsody in blue skies, green grass and colourful characters, this richly evocative biography finds that Cardus’ mother was a prostitute, he never knew his father and he received negligible education.”

Final non-fiction collection from the late legendary author, who will be sorely missed.

“Spanning four decades, these essays, speeches, and meditations interrogate the world around us. They are concerned with race, gender and globalisation. The sweep of American history and the current state of politics. The duty of the press and the role of the artist. Throughout A Mouth Full of Blood our search for truth, moral integrity and expertise is met by Toni Morrison with controlled anger, elegance, and literary excellence.”

The Curse of the School Rabbit, by Judith Kerr

Last book from the much-loved children’s author who died recently.

“Snowflake is the school rabbit, and Snowflake is trouble. At least that’s what Tommy thinks, and when Snowflake is unexpectedly left for him to look after and everything starts to go wrong, it looks like Tommy might be right. Even if he is getting more pocket money for feeding it and might be able to afford a new bike after all. And with a sick sister left in bed, a snobby actor left with suspiciously damp trousers, and no rabbit anywhere to be seen, Tommy can see his hopes of a new bike disappearing as fast as Snowflake.

“Will Snowflake turn up, and turn out to be more good luck than bad? Or are Tommy and his family doomed by the curse of the school rabbit?”

The Art of Racing in the Rain: meet the dog who will show the world how to be human, by Garth Stein

“A heart-warming and inspirational tale in which Enzo, a loyal family dog, tells the story of his human family, how they nearly fell apart, and what he did to bring them back together.”

Soon to be a major film.

Emma Jane Unsworth’s 2014 book has been made into a film starring Holliday Grainger, described as ‘Withnail with girls’.

“Laura and Tyler are best friends and drinking buddies. But things are set to change when Laura gets engaged to the man of Tyler’s nightmares. Can their friendship survive? Or will growing up mean growing apart?”

Blinded by the Light, by Sarfraz Manzoor

Originally titled Greetings from Bury Park, this book is now a major film from the makers of Bend It Like Beckham.

“A charming and poignant memoir of growing up during the eighties as both a Pakistani Muslim and Bruce Springsteen fan, this book is Sarfraz Manzoor’s journey from the frustrations of his childhood to his reactions concerning the tragedies of 9/11 and 7/7. It is an inspiring tribute to the power of music to transcend race and religion.”

This is Not Propaganda: adventures in the war against reality, by Peter Pomerantsev

“We live in a world of influence operations run amok, a world of dark ads, psy-ops, hacks, bots, soft facts, ISIS, Putin, trolls, Trump. We’ve lost not only our sense of peace and democracy - but our sense of what those words even mean.

“As Peter Pomerantsev seeks to make sense of the disinformation age, he meets Twitter revolutionaries and pop-up populists, ‘behavioural change’ salesmen, Jihadi fan-boys, Identitarians, truth cops, and much more. 40 years after his dissident parents were pursued by the KGB, he finds the Kremlin re-emerging as a great propaganda power. His research takes him back to Russia - but the answers he finds there are surprising.

“Part reportage, part intellectual adventure, this book is a Pynchon-like exploration of how we can reimagine our politics and ourselves in a time where truth has been turned topsy-turvy.”

“In this age of 24-hour news coverage, where rallying cries are made on Twitter and wars are waged in cyberspace as much as on the ground, the idea of a novel as a weapon that can wield any power feels almost preposterous. The Cold War was a time when destruction was merely the press of a button away, but when the real battle between East and West was over the minds and hearts of their people. In this arena the pen really was mightier than the sword. This is a richly-populated history of spies and journalists, protest and propaganda, idealism and betrayal.”