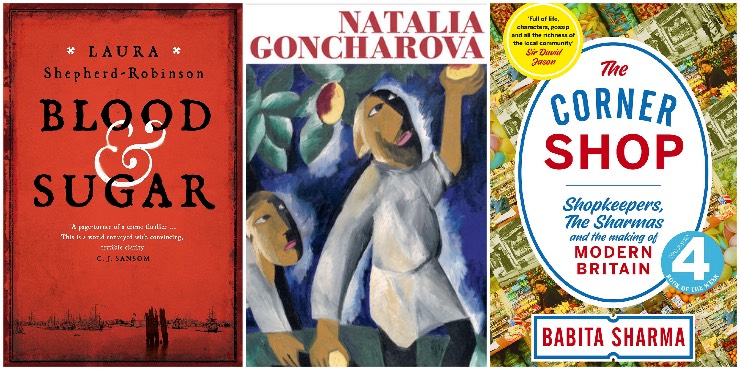 “According to the ‘Nice and Accurate Prophecies of Agnes Nutter’ - the world’s only totally reliable guide to the future - the world will end on Saturday.”

The writer of Fire and Fury, returns with more gossip and scandal. He picks up the story just as Trump’s second year as president is getting underway and ends with the delivery of the Mueller report.

“At the heart of Joseph Heller’s bestselling novel is a satirical indictment of military madness and stupidity, and the desire of the ordinary man to survive it. It is the tale of Captain Yossarian who spends his time plotting to survive.”

Laura Shepherd-Robinson appeared recently at Heffers’ Murder Will Out day. This debut novel comes highly recommended by C. J. Sansom and has had excellent reviews.

“June, 1781. An unidentified body hangs upon a hook at Deptford Dock - horribly tortured and branded with a slaver’s mark. Some days later, Captain Harry Corsham - a war hero embarking upon a promising parliamentary career - is visited by the sister of an old friend. Her brother, passionate abolitionist Tad Archer, had been about to expose a secret that he believed could cause irreparable damage to the British slaving industry. He’d said people were trying to kill him, and now he is missing.

“To discover what happened to Tad, Harry is forced to pick up the threads of his friend’s investigation, delving into the heart of the conspiracy Tad had unearthed. His investigation will threaten his political prospects, his family’s happiness, and force a reckoning with his past, risking the revelation of secrets that have the power to destroy him.”

Companion volume to Frank Bowling’s major exhibition at the Tate.

“Celebrating the career of one of the most distinguished artists to emerge from post-war British art-schools, this publication covers Frank Bowling’s entire oeuvre, spanning 60 years.”

Lowborn: growing up, getting away and returning to Britain’s poorest towns, by Kerry Hudson

“Kerry Hudson is proudly working class but she was never proudly poor. The poverty she grew up in was all-encompassing, grinding and often dehumanising. Always on the move with her single mother, Kerry attended nine primary schools and five secondaries, living in B&Bs and council flats. She scores eight out of ten on the Adverse Childhood Experiences measure of childhood trauma.

“Twenty years later, Kerry’s life is unrecognisable. She’s a prizewinning novelist who has travelled the world. She has a secure home, a loving partner and access to art, music, film and books. But she often finds herself looking over her shoulder, caught somehow between two worlds.

“Lowborn is Kerry’s exploration of where she came from, revisiting the towns she grew up in to try to discover what being poor really means in Britain today and whether anything has changed.”

The Corner Shop: shopkeepers, the Sharmas and the making of modern Britain, by Babita Sharma

“Babita Sharma was raised in a corner shop in Reading, and over the counter watched a world in flux, from the clientele to the products to the politics of shopkeeping. Along with the skills to perfectly mop a floor and stack a shelf, she gained a unique insight into a changing world - and an institution that, despite the creep of supermarkets, online shopping and delivery, has found a way to evolve and survive.”

Bitcoin Billionaires: a true story of genius, betrayal and redemption, by Ben Mezrich

The author of The Accidental Billionaires, which became the basis for the film The Social Network, picks up the story of two of the major characters in that drama, Harvard students Tyler and Cameron Winklevoss. This is a story of revenge and redemption.

Lee Krasner, often unfairly described as Mrs Jackson Pollock, is now the subject of a major review of her own work at the Barbican, where she has now been recognised as one of the most important women artists of the 20th century.

“The four Olivier sisters were emancipated, determined and wild in an age when society punished women for being so. Margery and Daphne studied at Cambridge at a time when education was still thought to be damaging to ovaries. There they met Rupert Brooke and formed the Neo Pagans, initiating a web of entanglements that would challenge even the sisters’ unbreakable bond.