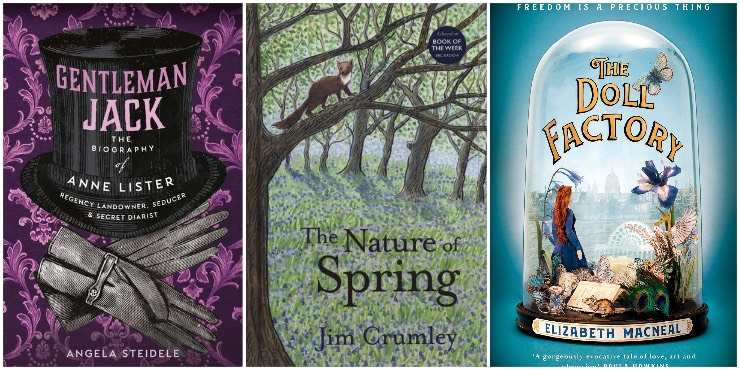 Tolkien and the Great War: the threshold of Middle-earth, by John Garth

The book of the film Tolkien, starring Nicholas Hoult and Lily Collins.

“This biography explores J. R. R. Tolkien’s wartime experiences and their impact on his life and his writing of The Lord of the Rings. It is written for a general audience, rather than just Tolkien fans, and views his life, work, inspiration and success from a new viewpoint.”

The book behind the major BBC drama starring Suranne Jones.

“Anne Lister was a wealthy Yorkshire heiress, a world traveller and an out lesbian during the Regency era - a time when it was difficult simply to be female. She wrote her diary in code derived from Ancient Greek, including details of her liaisons with women. Liberated by her money, she remained unmarried, opened a colliery and chose to dress all in black. Some locals referred to her as Gentleman Jack and sent her poison pen letters, but this did not dissuade her from living mostly as she pleased.

“On inheriting Shibden Hall, Anne chose to travel abroad, before returning to Halifax and courting Ann Walker, another wealthy heiress twelve years her junior. They renovated Shibden Hall together and considered themselves married, to the horror of Walker’s relatives.”

The author of American Psycho doesn’t pull any punches as he vents his disdain on millennials and the digital world.

“Combining personal reflection and social observation, Bret Easton Ellis’s first work of non-fiction is an incendiary polemic about this young century’s failings, a definition and defence of what ‘freedom of speech’ truly means, and an irreverent behind-the-scenes look at the life of one of the world’s most infamous writers.”

The remaining Avengers recently took a final stand in Marvel Studios’ grand conclusion to the twenty-two films. Relive the epic battle in comic format, with a couple of extras thrown in.

“As the Avengers and their allies have continued to protect the world from threats too large for any one hero to handle, a new danger has emerged from the cosmic shadows: Thanos. A despot of intergalactic infamy, his goal is to collect all six Infinity Stones, artefacts of unimaginable power, and use them to inflict his twisted will on all of reality. Everything the Avengers have fought for has led up to this moment - the fate of Earth and existence itself has never been more uncertain.”

This debut novel has been very widely reviewed and has been praised by Paula Hawkins and Joanne Harris among others.

“Cambridge University in 1937 is awash with ideas and idealists - to unworldly Joan it is dazzling. After a chance meeting with Russian-born Sonya and Leo, Joan is swept up in the glamour and energy of the duo, and finds herself growing closer and closer to them both.

“But allegiance is a slippery thing. Out of university and working in a government ministry with access to top-secret information, Joan finds her loyalty tested as she is faced with the most difficult question of all: what price would you pay to remain true to yourself?”

“The stunning true story of an Alabama serial killer, and the trial that obsessed the author of To Kill a Mockingbird in the years after the publication of her classic novel - a complicated and difficult time in her life that, until now, has been very little examined.

“Willie Maxwell was a Baptist reverend in Alabama; he also happened to be a serial killer. Between 1970 and 1977, his two wives and brother all died under suspicious circumstances - each with hefty life insurance policies taken out by none other than the Reverend himself. With the help of a savvy lawyer, Maxwell escaped justice for years. Then, the teenage daughter of his third wife perished. At the funeral, the victim’s uncle shot the Reverend dead in a church full of witnesses - and was subsequently acquitted of the murder, thanks to the same savvy lawyer who had represented the Reverend for all those years.”

Losing Earth: the decade we could have stopped climate change, by Nathaniel Rich

“Nathaniel Rich’s groundbreaking account of that failure - and how tantalisingly close we came to signing binding treaties that would have saved us all before the fossil fuels industry and politicians committed to anti-scientific denialism - is already a journalistic blockbuster, a full issue of the New York Times Magazine that has earned favourable comparisons to Rachel Carson’s Silent Spring and John Hersey’s Hiroshima. Rich has become an instant, in-demand expert and speaker. A major movie deal is already in place. It is the story, perhaps, that can shift the conversation.”

The Nature of Spring, by Jim Crumley

Another recent Book of the Week.

“Spring marks the genesis of nature’s year. As Earth’s northern hemisphere tilts ever more towards the life-giving sun, the icy, dark days of winter gradually yield to the new season’s intensifying light and warmth. Nature responds.”

Hinch Yourself Happy: all the best cleaning tips to shine your sink and soothe your soul, by Sophie Hinchcliffe

The Mrs Hinch Instagram phenomenon reaches Suffolk libraries. If you have not heard of her, think Marie Kondo for household chores.

“Discover how to transform your home. Cleaning doesn’t have to be that job you dread. Not when Mrs Hinch is here to show you her sparkly ways.

“Mrs Hinch has taken the nation by storm with her infectiously addictive charm, clever cleaning hacks and her passionate belief in the life-changing magic of tidying. With the help of her cloth family, Mrs Hinch will help you turn your house into a home.”