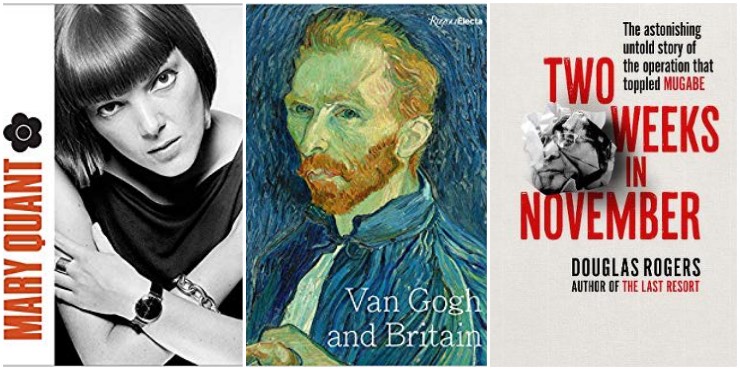 A recent Radio 4 Book of the Week choice.

“An extremely moving account of life in Yarmouk, Damascus, from a man determined to hold onto hope in the face of war. This tender and poetic account of Aeham’s experiences, from losing his city, friends and family to leaving his country and finding safety, will move readers with raw and candid emotion. His heart-wrenching story has been transcribed from Syrian into English and it is the understated use of the English language that gives a stark and poignant voice to Aeham’s traumatic experiences. This is a gripping portrait of a man’s search for solace, and of a country that has been fiercely torn apart.”

Another Radio 4 Book of the Week choice.

“After visiting Japan in 1902 and 1907 and discovering two magnificent cherry trees in the garden of his family home in Kent in 1919, Collingwood Ingram fell in love with cherry blossoms, and dedicated much of his life to their cultivation and preservation. On a 1926 trip to Japan to search for new specimens, Ingram was shocked to see the loss of local cherry diversity, driven by modernisation, neglect and a dangerous and creeping ideology.

“The most striking absence from the Japanese cherry scene, for Ingram, was that of Taihaku, a brilliant ‘great white’ cherry tree. Multiple attempts to send Taihaku scions back to Japan ended in failure. Over decades, Ingram became one of the world’s leading cherry experts and shared the joy of sakura both nationally and internationally. This book presents a portrait of this little-known Englishman.”

Accompaniment to the major exhibition at the V&A about the designer who epitomised the Swinging Sixties.

“Dame Mary Quant is a fashion icon. The first focused study of her career, this book shows how she revolutionised fashion, harnessing youth, street style and mass production to create a new look for everyone. It surveys the development of her business in the context of British, European and American fashion in the post-war period, and explores how her innovative marketing created a powerful global brand.

“Featuring new photography of Quant garments, alongside previously unpublished fashion photographs and designs, this book is a dynamic and authoritative account of the designer and her legacy.”

The Work I Did: a memoir of the secretary to Goebbels, by Brunhilde Pomsel, Thore D. Hansen & Shaun Whiteside (trans.)

Maggie Smith has been tempted back to the stage for the first time in 12 years in a new monologue, A German Life, based on the testimony of Brunhilde Pomsel.

“Brunhilde Pomsel described herself as an ‘apolitical girl’ and a ‘figure on the margins’. How are we to reconcile this description with her chosen profession? Employed as a typist during the Second World War, she worked closely with one of the worst criminals in world history: Nazi Propaganda Minister Joseph Goebbels. She was one of the oldest surviving eyewitnesses to the internal workings of the Nazi power apparatus until her death in 2017.

“Her life, mirroring all the major breaks and continuities of the twentieth century, illustrates how far-right politics, authoritarian regimes and dictatorships can rise, and how political apathy can erode democracy. Compelling and unnerving, this title gives us intimate insight into political complexity at society’s highest levels - at one of history’s darkest moments.”

“This publication accompanies a major exhibition at Tate Britain, exploring Van Gogh’s relationship with British art and culture, tracing the story from the artist’s obscure years through to iconic status.”

Two Weeks in November: the astonishing untold story of the operation that toppled Mugabe, by Douglas Rogers

Another Radio 4 Book of the Week.

“Douglas Rogers spent his youth and early adult life watching his parents struggle to make ends meet under the vicious dictator, Robert Mugabe. He thought he would never see the day when his iron grip on the country would come unstuck.

“Combining close political analysis and personal anecdotes, this book tells the incredible story of the two weeks in November 2017 when Mugabe fell from power. Written in the style of a contemporary political thriller, Two Weeks in November is a ripping historical account of Zimbabwe’s chequered and difficult past and a moving memoir of a journalist’s life-long relationship with the country he was born in.”

The story of Manchester City’s great goalkeeper is the subject of new film The Keeper.

This biography of the man John Le Carré called “the spy to end all spies” is attracting a lot of coverage.

“Richard Sorge was a man with two homelands. Born of a German father and a Russian mother in Baku in 1895, he moved in a world of shifting alliances and infinite possibility. A member of the angry and deluded generation who found new, radical faiths after their experiences on the battlefields of the First World War, Sorge became a fanatical communist - and the Soviet Union’s most formidable spy.

“Like many great spies, Sorge was an effortless seducer, combining charm with ruthless manipulation. He did not have to go undercover to find out closely guarded state secrets - his victims willingly shared them. As a foreign correspondent, he infiltrated and influenced the highest echelons of German, Chinese and Japanese society in the years leading up to and including the Second World War.”