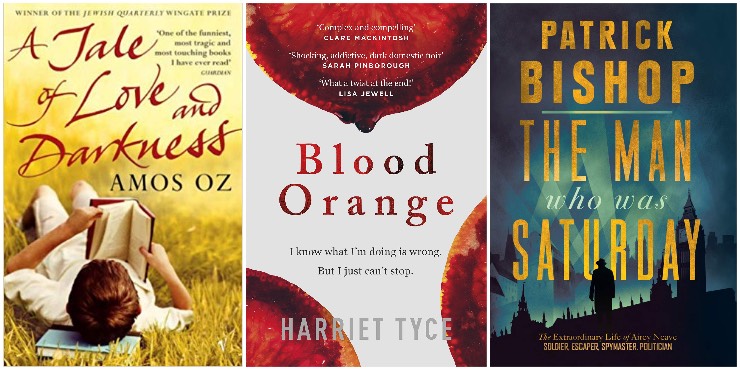 “Diane Arbus (1923-1971) is one of the most distinctive and provocative artists of the 20th century. Her photographs of children and eccentrics, couples and circus performers, female impersonators and nudists, are among the most recognisable images of our time. This book is the definitive study of the artist’s first seven years of work, from 1956 to 1962.”

Accompanies the major exhibition at the Hayward Gallery.

Harriet Tyce’s new novel has been optioned by World Productions, the company behind Bodyguard and This Life.

“Alison has it all. A doting husband, adorable daughter, and a career on the rise - she’s just been given her first murder case to defend. But all is never as it seems. Alison drinks too much. She’s neglecting her family. And she’s having an affair with a colleague whose taste for pushing boundaries may be more than she can handle.

“Alison’s client doesn’t deny that she stabbed her husband - she wants to plead guilty. And yet something about her story is deeply amiss. Saving this woman may be the first step to Alison saving herself. But someone knows Alison’s secrets. Someone who wants to make her pay for what she’s done, and who won’t stop until she’s lost everything.”

The Aftermath, by Rhidian Brook

“Hamburg, 1946. Charged with overseeing the rebuilding of this devastated city, Colonel Lewis Morgan is requisitioned a house, where he will be joined by his wife, Rachael, and son, Edmund. But rather than force its owners, a German widower and his daughter, to leave their home, he insists that the two families live together.”

The book behind the new major film starring Keira Knightley.

Max Porter’s second book has been optioned by BBC Films and actress Rachel Weisz for a future production.

The play behind the TV series.

“A rip-roaring account of some sort of female living her sort of life, Phoebe Waller-Bridge’s debut play is an outrageously funny monologue for a female performer. It premiered at the 2013 Edinburgh Festival Fringe, performed by Phoebe herself, before transferring to Soho Theatre, London, for several successful runs, followed by a UK tour.”

Nicholas Hilliard: life of an artist, by Elizabeth Goldring

Hilliard is currently the subject of an exhibition at the National Portrait Gallery.

“This illustrated biography follows Nicholas Hilliard’s long and remarkable life (c. 1547-1619) from the West Country to the heart of the Elizabethan and Jacobean courts. It showcases new archival research and stunning images, many reproduced in colour for the first time.

“Hilliard’s portraits - some no larger than a watch-face - have decisively shaped perceptions of the appearances and personalities of many key figures in one of the most exciting, if volatile, periods in British history. His sitters included Elizabeth I, James I, and Mary, Queen of Scots; explorers Sir Francis Drake and Sir Walter Raleigh; and members of the emerging middle class from which he himself hailed.”

A Tale of Love and Darkness, by Amos Oz

“Love and darkness are just two of the powerful forces that run through Amos Oz’s moving story. He takes the reader on a bold, seductive journey through his childhood and adolescence, a child’s eye view along Jerusalem’s war-torn streets in the 1940s and ’50s.”

One of the greatest (and funniest) writers is available again to read.

“Franz-Josef Murau lives in self-imposed exile in Rome, consumed by hatred for his family and native Austria. When he is left the family estate, he is faced with a symbol of all he loves and hates, and he seeks both metaphysical and literal extinction.”

“Provocatively written, this text includes never before seen photographs and behind the sceens paraphernalia of the most influential, enduring and iconic rock band of the 1980s, Mötley Crüe.”

The Man Who Was Saturday: the extraordinary life of Airey Neave: soldier, escaper, spymaster, politician, by Patrick Bishop

“Forty years after his death, Patrick Bishop’s lively, action-packed biography examines the life, heroic war and death of one of Britain’s most remarkable 20th century figures.

“Taken prisoner during WW2, he was the first British officer to escape from Colditz and, using the code name ‘Saturday’, became a key figure in the IS9 escape and evasion organisation which spirited hundreds of Allied airmen and soldiers out of Occupied Europe. A lawyer by training, he served the indictments on the Nazi leaders at the Nuremburg war trials. An ardent Cold War warrior, he was mixed up in several of the great spy scandals of the period.”